Pittsburgh Musical Theater is bringing Disney’s Tarzan The Musical back to the Byham stage on May 4th, and we managed to track down the star of the show, John Clayton himself, Dave Toole. One of the busiest performers in Pittsburgh took a few moments to talk about the physical rigors of being the high-flying jungle protector, being married to Jane, comics books, music, and a few other surprises. Enjoy 10 questions with Dave Toole.

How do you think Tarzan relates to your life?
We’re both still trying to figure it out. Little by little. The smallest things can be catalysts to change the entire trajectory of your anticipated path in life. Being open, excited, and ready for these catalysts to appear makes the experience something that leaves you stronger and better on the other side. Tarzan actively looks for these experiences with an open heart and mind. I’m trying to approach life in the same way.

You’re married to Jane (AKA Kate Toole, AKA Kate Queen), How’s that working out so far?
Kate has been and continues to be one of the best things that’s ever happened to me. I know that’s a cliche’ but I mean it with the utmost conviction. The reason I’m performing full time today is because of her unending encouragement and motivation. We met doing a performance of West Side Story at RMU (Kate was Maria and I was Tony) and as of this June we will have been married for 5 years! Getting the chance to perform with her as Tarzan to her Jane is a nice little anniversary celebration!

What got you into theater?
A friend of mine from college, Dom DeNardis encouraged me to audition for the musical in my sophomore year at RMU. He knew I had a passion for performing and thought that theater, although completely different from my rock music background, would be a welcomed outlet for me to grow as an artist. I auditioned with an accapella version of “Sweet Child of Mine” by Guns N Roses wearing a cut off t shirt and camo shorts. Ken Gargaro, director of the show that season, saw something in me and gave me a shot. That opportunity gave me more than just a chance to perform. It completely changed the trajectory of my life. I met my wife in that show, I made some of the best friends that I still hold dear to this day in that show, and I found my career path in that show.

What have been your 3 most memorable shows?
Tony in West Side Story with RMU:it will always be number one for reasons stated above!

Judas in Jesus Christ Superstar with Pittsburgh Musical Theater: it was a dream role and one I never thought I’d get to play. The music in that show absolutely rocks and there is so much room to make it your own vocally speaking. It satiated my rock and roll roots!

Jamie Wellerstein in the Last 5 Years with Front Porch Theatricals: one of the more demanding and challenging roles I’ve ever played but without a doubt one of the most fulfilling. Performing that incredibly moving score from Jason Robert Brown on a professional stage is something I will always be grateful for.

What’s the hardest part about being a full-time performer?
The constant hustle. You can never just sit back and collect a pay check. There has to be a constant drive for that next gig. When I land a show, when I rehearse, when I’m performing, that is my payoff. The grind happens when I’m off stage.

What’s your workout regimen to prepare for this role?
This role requires not only aesthetics but functional strength to jump around stage, climb ropes, walk on knuckles etc. I opted for a combination of 2 different High Intensity Interval Training programs to build the strength and endurance needed to perform. I used the tried and true Insanity program mixed with 9 Round Kickboxing. I really dug in about 2 months ago. For the first month I did 3-4 days of Kickboxing per week and a slightly modified diet keeping calories to about 1500-1600 NET-cals/day with no alcohol or refined sugar, and low carbs from rice, potatoes, and vegetables. In the last 3 weeks I’m doing 1200 net-cals/day with 5-6 days of the Insanity program & Kickboxing and a diet that consists of about 70% protein 20% fat and 10% carbs. 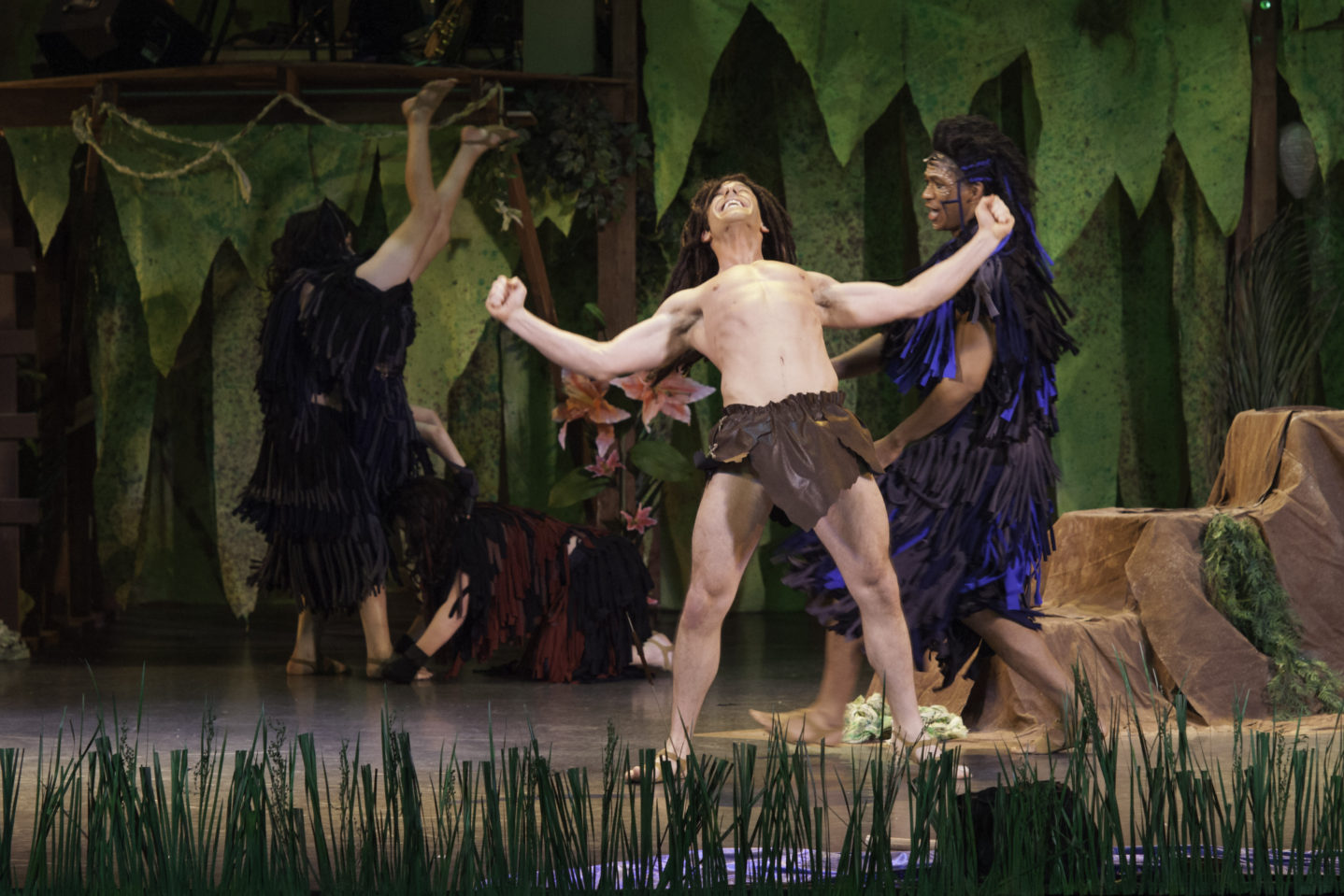 3 Bands everyone should listen to?
I’ll give you 4 because I want to shamelessly plug my band Identity X!
Top three right now:
-Dredg
-Incubus
-Coheed and Cambria
What’s your guilty pleasure?
Frozen Yogurt haha. Ask Kate about my addiction to that stuff.

Favorite Superhero?
As far as films go, Wolverine hands down.
As for comics, I’m torn between Gambit from the X-Men and Captain America. Those two were my absolute favorites as a kid.

Your most embarrassing theater moment to date?
EASY. West Side Story at the Byham Theater back in 2008. Student Matinee. They write the song “Maria” with what is called an option in the bridge. This is a section of the song that allows you to choose between a more difficult melody or a more manageable and predictable one. Being sure of myself and neglecting that it was a 9am student matinee I foolishly choose the more challenging of the two and regretted it almost instantly when the beautiful tenor note that was written came out of my throat as a soul shattering screech likened to a banshee howling in its death throes. Oh the joys of live theater…. ya live ya learn haha.