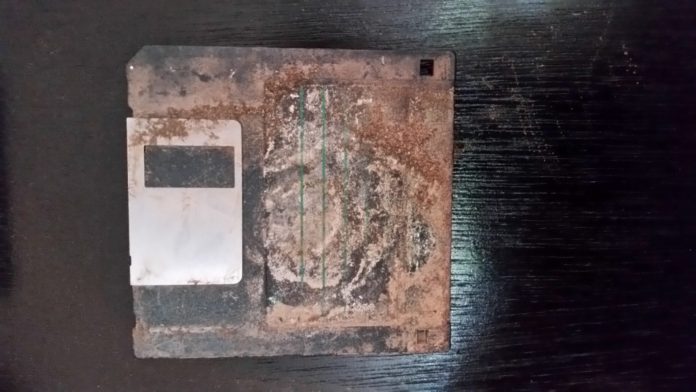 The title of the latest exhibit at the 707 & 709 Galleries lives up to its name, promising tech junkies a veritable buffet of digital-themed works and then pulls a bait and switch – only this time with something better.

Walking up to the gallery, you are greeted by store mannequins in high-waisted jeans, cargo shorts and baggy shirts, complete with floppy disks in hand, Dragon Ball Z comics stuffed into a pocket, and what looks like a bell jar placed over their heads. 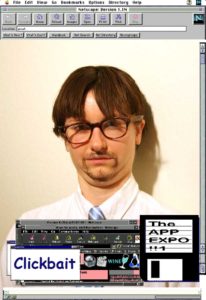 The gallery attendant directs you to read more about the artists in an oversized label above an office desk that describes the success of Ashley Andrews and Ashley Andrykovitch’s successful WHOA, BUDDY! app that prevents one from spending too much time online and alerts you that you have downloaded it already just by reading the label.

The real project, the App Expo, has been an ongoing collaboration of the artists for five years and this exhibition is actually a cumulation of different works the Pittsburgh creators have developed for shows at the Carnegie Museum of Art and the Warhol amongst others.

While the parodic exhibit – replete with VHS-compatible televisions, vintage handheld games, and a dial-up sound crackling in the background – is a bit of a nostalgic look back at where we have come from, it is also a searing critique of where we are now.

The contrast between the long-distant past of 1994, from which the artists’ time-traveling  scientist personas have come, and our modern age is jarring. An office display of old computers, scattered coding manuals, piles of manga, and vintage Apple logos in what could only be the den of a stereotypical male geek is where we start. 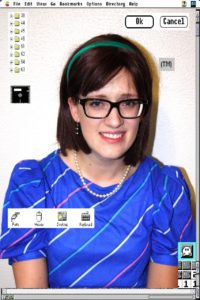 We then carry on through the exhibit, watching amusing videos of the two female artists in costume as Bill & Jackie as they awkwardly encounter passerby in “interviews” and at real Las Vegas tech conferences.

We also witness pointedly low-tech works, including paintings, hand-painted plates and printed photographs that force us to come to terms with the reality of websites as words and images composited on a digital screen much like the 2D objects before us.

Humorous references to Facebook, Snapchat, text-speak, selfies, and other current technologies that have seamlessly woven themselves into the fabric of so many lives challenges us to ask ourselves whether we lost our way and forces us to rethink the way we engage in the world.

Skillfully playing off of the technology we thought we knew, challenging gender norms, and keeping us laughing the entire time, Clickbait: App Expo is an understated yet completely immersive and offbeat show that deserves high traffic. 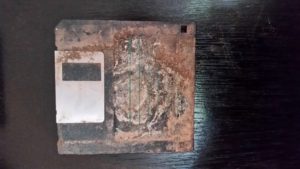 Clickbait: The App Expo is open Wednesday through Sunday until November 5th at the 707 & 709 Galleries in downtown Pittsburgh, PA.