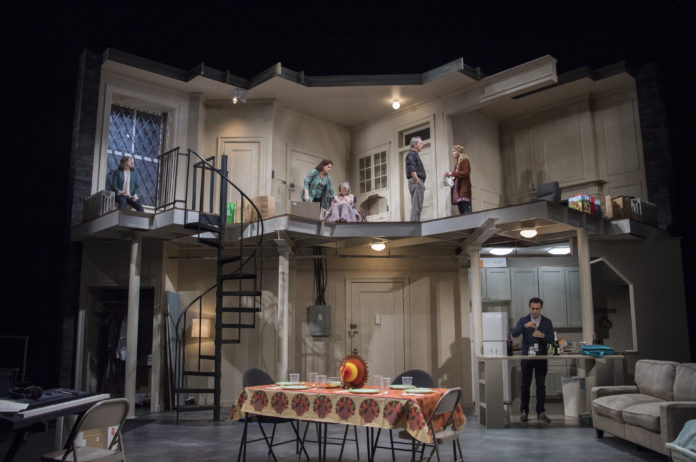 The Humans opened at Pittsburgh Public Theater just in time for Thanksgiving. The Humans takes place at Brigid and Richard’s new apartment in Chinatown where Brigid’s family traveled in for Thanksgiving dinner from Scranton, PA and family drama then unfolds. Over traditions of Peppermint Pigs and saying grace the family talks fears and current issues.

The Humans tells a few different storylines that all intertwine. Aimee is Brigid’s sister and has recently lost her job and her partner. She is a survivor of 9/11 and that plays a pivotal role in why the family dislikes Brigid living in New York City.

Erik and Diedre are Brigid’s parents and have the biggest secret that won’t be revealed till after dinner and is the climax of the play. They bring along Momo, their mother, who is suffering from dementia and has frequent outbursts and on this day is having a bad day. Momo does have her moment when Diedre reads the last email she sent the girls before she started to slip away. This was an emotional moment in the play where there wasn’t a dry eye onstage or in the audience.

Brigid and Richard have their own issues since they are living together, unmarried, and still struggling to find themselves. Brigid is working a few jobs and is trying to find herself as a musician. Richard is still in school and has his only story to tell.

The Humans will have you laughing, crying and feeling nostalgia for your own family dinners. From the fights and smart mouths to Momo’s tearful goodbye, you will not be sure what to feel next.