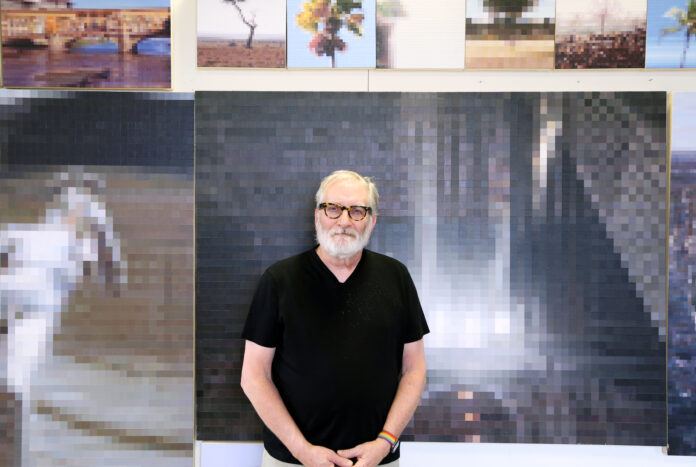 Across from the old crystallography laboratory in one of the University of Pittsburgh’s many buildings is Kenneth Batista’s art studio. Batista is a professor in the Department of Studio Arts at the university, teaching there since 1978. The studio is well-lit, large windows allowing the dull gray daylight to fill the multiple rooms. Batista’s acrylic paintings–mostly from his Pixelated Series–line a constructed wall in the studio. Two new works-in-progress rest on easels. These paintings look like pixelated photos–abstract up close and more recognizable the further back one stands. One can pick out a watery scene in Venice or the Cliffs of Moher or a centered tree in a desert. Nearby, CDs are stacked in piles on a table–Batista is also a radio host, hosting the long-running An American Sampler program on WYEP. Tune in Sundays at 5 PM for three hours of new and classical folk music.

I met with Batista to discuss how music and art intersect in his life and the process of how the Pixelated Series paintings are constructed.

David Bernabo: I’m curious about the pixelated paintings. When did that come about and what’s the process for creating them?

Kenneth Batista: 2008. My paintings prior to that–I work in series–were very geometric. I did shaped canvases for a while–very gestural, very fine line. Then the brushless series immediately followed. I was physically pulling the paint across the surface.

In 2008, we took a trip to Kenya. I was bouncing around the Masai Mara in a Land Rover, and I wanted to capture that feeling. I returned home with hundreds of photographs. Playing around with them in Photoshop, I came up with an image–a photograph that is pixelated–and that serves as the beginning of the painting. From there, the painting takes on a life of its on. When you are close up, they appear to be abstract squares. As you stand away from them, they morph into a recognizable image. They are about places, a landscape in Kenya. The one I’m working on now is from Buenos Ares. I did an artist residency there. I’m doing an Ireland series. I have a series from Italy. But they are beyond travelogue pictures. I’m a colorist, and this format allows me a platform to play with color. The photograph serves as the beginning.

DB: There seem to be a lot of trees in your paintings.

KB: I started with the tree. What I’m working on now is a tree. What I realized on the Mara is that trees are the center of life. They are very sporadic, but they have their own ecosystem. It’s also an iconic image. The tree fascinates me. I think my next painting may be a tree from Ireland, from the West Coast. With the heavy sea breeze, the trees aren’t straight. They are sideways. And they’re permanently shaped that way.

DB: Is the act of personally taking the photo important?

KB: I have a strict rule that the image must come from my lens. I don’t appropriate–well, except for one series called Old Masters. I did the Mona Lisa and Jan van Eyck’s The Arnolfini Portrait [in the pixelated style].

DB: Are these paintings physically difficult to make?

KB: The paintings are painstaking. Each square is painted individually. One of the paintings has between three or four-thousand squares. I’m about process. I’m very focused when doing these things. They take ten forevers. It’s odd because I used to be a printmaker. When you are working on a multi-color lithograph, the mind doesn’t stop. As you are mechanically producing these prints and dealing with the process, your head is already ten images ahead, but you are stuck working on the same image. I find that to be frustrating. So, I moved into painting. I have source material to paint into the next century. But everything evolves. I’m not sure where the work will go, and that’s part of the excitement of it. That’s another similarity to music; the segway.

DB: How do you discover new music?

KB: I attend conferences, but the music finds me. I get 10, 12, 15 CDs each week in the mail. I post my [radio show] playlists to an international listserv. When I’m painting, I’m always previewing music. For a three-hour air shift, I’m putting at least 10 hours into the show.

Every week, I go in like it’s my last show. I try to do the best I can. I pay particular attention to segways–how one song leads to another. Try not to have too many trainwrecks in an hour. I told [WYEP] that I would do it as long as it was fun. If it turns into a job, I’ve already got one. I don’t need another. 29 years later, I’m still doing it.

KB: I learn a lot from my students. It’s a reciprocal energy. I don’t know how it works, but it does work that way. In my teaching, I’m a firm believer that you learn to teach by teaching. And I’m a much different teacher than I was 42 years ago. You learn how to motivate students in ways that you didn’t know before.  If I wasn’t teaching, I don’t know what I’d be doing. When I stop and think about it, I decide not to think about it.