In recent weeks, the city has been buzzing with conversations of the local music scene with disjointed views including that Pittsburgh is not a city for professional musicians. After meeting and interviewing several performers and promoters, I met Rachel B, singer for the band little good bad (+ -), and the band’s story proved that Pittsburgh can be attractive to touring bands as well as locals.

After attending Berklee College of Music, Rachel B and her partner Billy Castle were living in Los Angeles. During a cross-country tour, they visited Pittsburgh on their second to last stop. They had never been to the Burgh and had no preconceived notions of the city. During a performance at a local event space called SixThreeFour a connection was sparked. “We immediately felt something special with the City and people of Pittsburgh,” said Rachel B. They met an incredible group of people, dined at amazing restaurants, visited music venues, and enjoyed a day trip to Ohiopyle. The band ended up moving to Pittsburgh about two months later.

“As developing indie artists, it can be really difficult to find a place where you can afford to live and have time to work on your craft. I don’t think we would have made nearly as much progress in developing our sound if we hadn’t moved to Pittsburgh. It’s affordable and the city is surrounded with real character, good people and inspiration. We’re so grateful to call Pittsburgh home,” Rachel said. 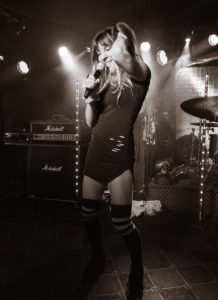 little good bad (+ -) is releasing a new song every month and creating high quality music videos. They have integrated their band into the local scene in addition to getting national recognition.

On March 19, 2018, NYS Music debuted their latest music video. You can view it here. You can see them live at their next local show at the new venue in the South Side, The Stage at Karma on Saturday, March 24th. Doors are at 8:30PM and the evening includes performances by Red Room Effect and Xavier Wells. 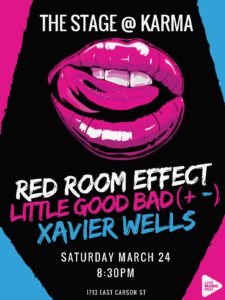 It’s an inspiring story to hear a national touring band fall in love with Pittsburgh, but it’s even more impactful to hear that being a professional musician in this city is possible.

It’s up to fans like you to go see live music to grow the local scene.

See you at the next show!