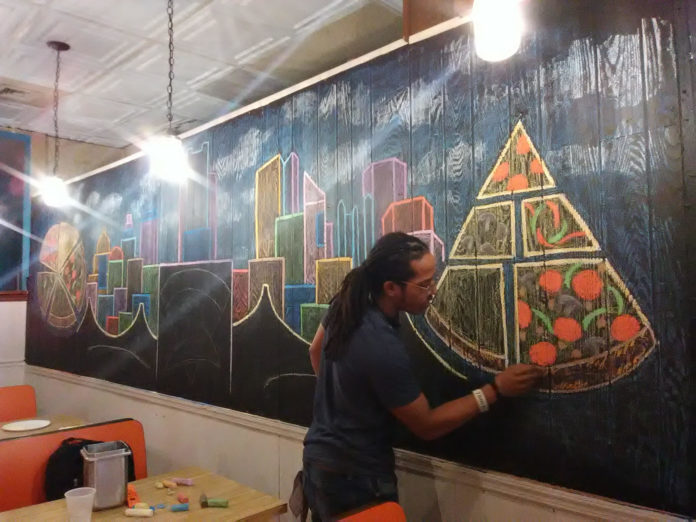 Marlon Eazywider is a local artist working and living in Pittsburgh. You can find him working at two of Pittsburgh’s museums: The Andy Warhol Museum and The Mattress Factory. But when he’s not educating visitors there, he’s creating his own art in his mixed media mosaic style and murals, and most recently with his own curatorial adventure.

Mixed media mosaic can be seen as a number of things – most importantly in his artwork. For his art, it is when he creates a painting then embellishes the paints in different ways with glass or pastels. But as a curator, he considers that as mixed media mosaic as well.

“Mixed media mosaic to me means ‘many pieces to make one,’” Eazywider said. “So glass being arranged or different art forms getting together for one collective showcase, and anything created in a series to come together to make one piece or many pieces.” 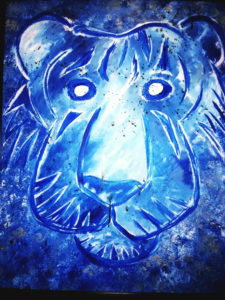 So, where can you see his work?

“You can see my work in Pittsburgh,” Eazywider said. “I don’t put my art out there as much as people say I should, but I do intend to more in the future.”

His work can be seen at Geppetto Cafe in Lawrenceville, Pizza Station in Bellevue, Pittza in Oakland, and most recently at the a new gallery space in Garfield called the Storefront.

Curating and showing art at the Storefront started when Scott Mervick, the owner of the gallery, was bouncing the idea of creating his space into a gallery space and reached out to Marlon to help him out.

The first show the Storefront held for Garfield’s Unblurred: First Fridays was in April 2018. The June show was the first show Eazywider curated. There were several of his own pieces shown, as well as work from other local artists.

“Since the gallery is so new, we haven’t had time to put shows together very neatly,” Eazywider said. “In the beginning, it wasn’t as smooth as we hoped, but moving forward, it’s running more smoothly.”

As previously mentioned, Marlon works in two of Pittsburgh’s most unique museums. He started his role at The Andy Warhol Museum as a gallery attendant then later joined the education department as an artist educator. Since working in that position, it led him to be hired as a freelance facilitator for the Heinz History Center and a museum educator for The Mattress Factory. His most recent endeavor was being chosen as a member of the 2018 Arts Education Collaborative Leadership Academy.

“I love the museum work and culture, but there’s always that aspect of being on a payroll and not getting paid,” Eazywider said.

“In a perfect world, I’d get paid for being an artist,” Eazywider said. “I would like to perform my work or be invited to do shows at a gallery or a museum ― that’s where my true passion lies.”

As far as staying in museums, he plans to stay in museums as long as he can.

“I believe the benefits of working in a museum are solid – very valuable, enriching,” Eazywider said.

So, what’s next for Marlon as an artist? Well, quite a lot. Since achieving solid ground over the past year, his main focus is more on the curatorial side, but is working on new collections in the meantime. He’s projected May 2019 to be his time for his takeover with collections of new work. His plan is to have at least three different shows simultaneously all with new work, in which each collection will have at least 10 to 15 pieces.

Stay updated on Marlon’s work by following him on Instagram.