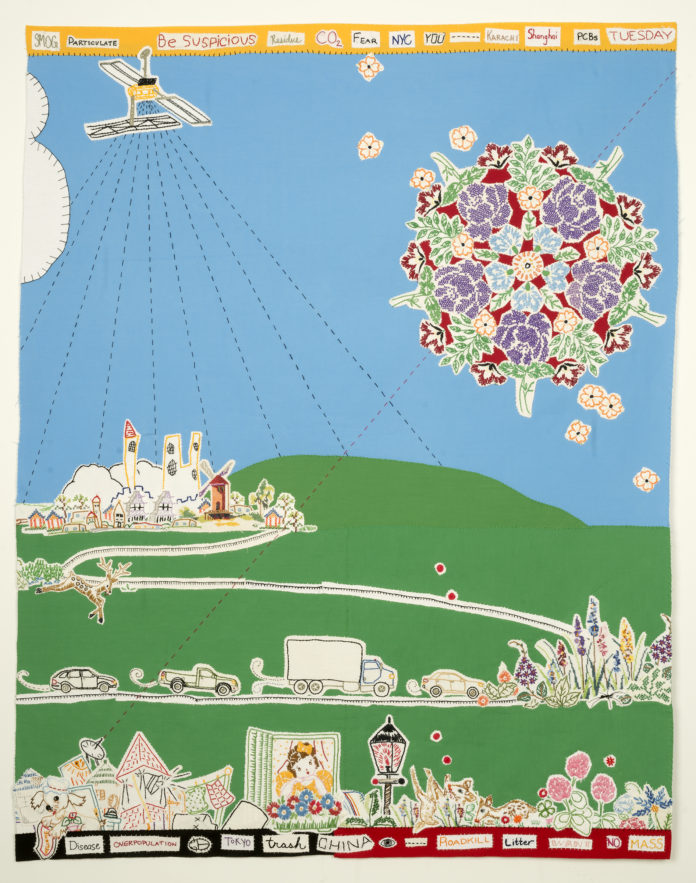 The ever-growing quilt – now at 288 square feet – Vantage Point has arrived in downtown Pittsburgh and can be seen inside the Steel Plaza T-Station in Contemporary Craft’s BNY Mellon Satellite Gallery.

Created by Maggy Rozycki Hiltner, the embroidered work has traversed the country, first 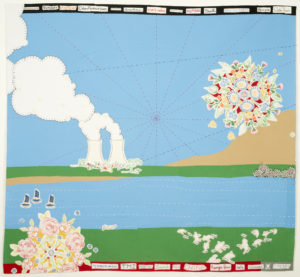 exhibited in Arizona in 2014, and later stopping at museums in Kansas and Montana with the artist adding more pieces to the quilt with every showing.

Although initially envisioned as a beautiful landscape, Vantage Point quickly changed into an exploration of how the picturesque environments of our childhood memories (especially the artist’s, who grew up in Pottstown, PA) are actually clouded in harsh realities of environmental degradation.

Pittsburgh audiences can relate. Looking around, it is easy to see that Pittsburgh once was – and in many ways still is – a place where factory emissions from the steel plants and water pollution have taken such a visible toll on the city.

Such dire issues are all presented to the audience in the form of a brightly-colored quilt decorated with charming animal figures, outlines of trucks and the figures of child characters inspired by books such as the Dick and Jane series. 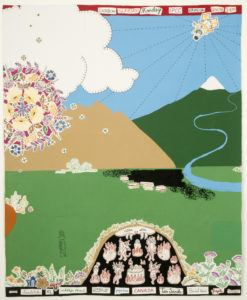 This familiar warmth and deceptive simplicity contrasted with the gravity of the disasters it presents provokes viewers to really challenge what they see on the surface and even encourages them to do with the same humor and cleverness used by Hiltner herself.

Vantage Point is free to the public and open now in the BNY Mellon Satellite Gallery in the Steel Plaza T-Station downtown from October 6th through February 4th.