Grab your sonic screwdrivers, lightsabers and stakes, because the Doctor, Luke Skywalker, Buffy Summers and more have come to the Toonseum in their latest exhibition Popology.

In this new show, curated by Anthony Letizia, guests get to visit new universes panel by panel as they explore original comics art and signed comic books from the superhero, horror and science fiction genres.

Beginning with Buffy the Vampire Slayer, it is clear to see how these comics – many of which expand on television worlds that so many fans of the franchises are familiar with – give each story a whole different scope, exploring environments and developing plot lines that could not have been pulled off on the small screen.

Also featured are boldly drawn and spectacularly colored scenes that pop off the pages, including the Doctor Who series (including both Nine, Ten, Eleven, and Twelve), the Serenity comics based on the cult favorite Firefly 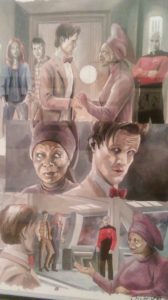 , The X-Files, Back to the Future, Star Wars, Star Trek, and even a breathtaking artistic interpretation of the BBC’s Sherlock.

Drawings by local artist Jim Rugg from The Guild were a special surprise, particularly for audiences familiar with Felicia Day and her delightfully nerdy comic about gamers who live out their dreams of becoming great warriors in an virtual world of fantasy, adding a bit of a magical touch to the dominantly sci-fi-centered show.

While it is easy to get lost in the incredible far-off places we get glimpses of, the Toonseum reminds us why so many die-hard fans have fallen in love with the characters and how crucial they are as the legends of our present times, particularly in one part of the show devoted to the contribution and power of female heroes, including Gamora, Sarah Manning, and Kate Bishop, a.k.a. Hawkeye.

An exhibit suited for die-hard comic fans, newbies, and families alike, Popology is pure fun for all in a quirky, one-of-a-kind museum not so far, far away. 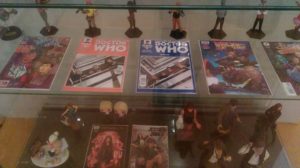 Popology: An Exhibit of Pop Culture and Comics is open until November 11th at the Toonseum on Wednesdays through Sundays from 11am-5pm.