Brad Bianchi  is a Pittsburgh artist with a wide range of styles and talents. A finalist in the 2014 Martha Stewart American Made contest, he creates reuse art, functional decor, reclaimed wood furniture and fine art. One of his Pittsburgh Skyline line drawings can be seen hanging in Mayor Bill Peduto’s office.

“I met Mr. Peduto at a fundraiser when he was running for mayor. When he was elected he decided to fill his office with local art, and asked me to do a piece.”

His Pittsburgh skylines are his most popular commissioned pieces. “People like them because they’re personalized. They can give me a list of things to hide in the drawings like dates and names. They take a lot of time but they’re fun. The one in Mayor Peduto’s office took about 70 hours to complete.”

Brad studied Wood & Furniture Design and Ceramics at Edinboro University, and has been making art for as long as he can remember. “As a kid, I was always taking things apart and putting them together in new ways,” says Brad. “Monsters always used to pop up in the things I’d build. I think you can still see that influence if you look at all the bolts and things that are sticking out of some of the faces and creatures I make,” laughs Brad. 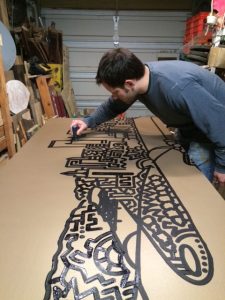 His family has always been very supportive of his artistic endeavors. His father, a tile contractor, would bring materials home from job sites for Brad to experiment with.  “My parents were also big phone doodlers. I think they had a big influence on my line drawings,” he laughs.

Brad scours Pittsburgh alleyways, hillsides, estate sales and Construction Junction for materials he utilizes for his reuse work. “You can find things everywhere. If you dig in the metal bins at Construction Junction you’d be amazed at the neat stuff buried in buckets of old rusty nails,” he says. “Sometimes I’ll find something and an idea will start taking shape in my head immediately. Other times I’ll pull out a bunch of little pieces of wood, metal or whatever from the storage bins in my studio and see what takes shape. Until about three years ago I rarely sketched things out. I’d put things together and they would just kind of come to life.”

“I enjoy all mediums, but I especially love making functional art. I enjoy the structural aspect of building furniture and like to use things that are not normally used to create it.” A dining table Bianchi created using a door from Central Catholic High School is estimated to have been opened one billion times.

“I like working with straight lines,” says Brad. “I love the work of designers like Frank Lloyd Wright and, although it’s totally different, I also enjoy the work of artists such as Keith Haring.”

Bianchi and artist Dante Lombardi recently completed work on a large mural at the East Liberty Transportation Center. In addition to building and creating in his Carrick studio, Brad works at Pittsburgh Winery building things and doing finishing work.  His art is on display there and will be featured at Vine Rewind , an all-day music festival and neighborhood block party on Sunday, June 26th.