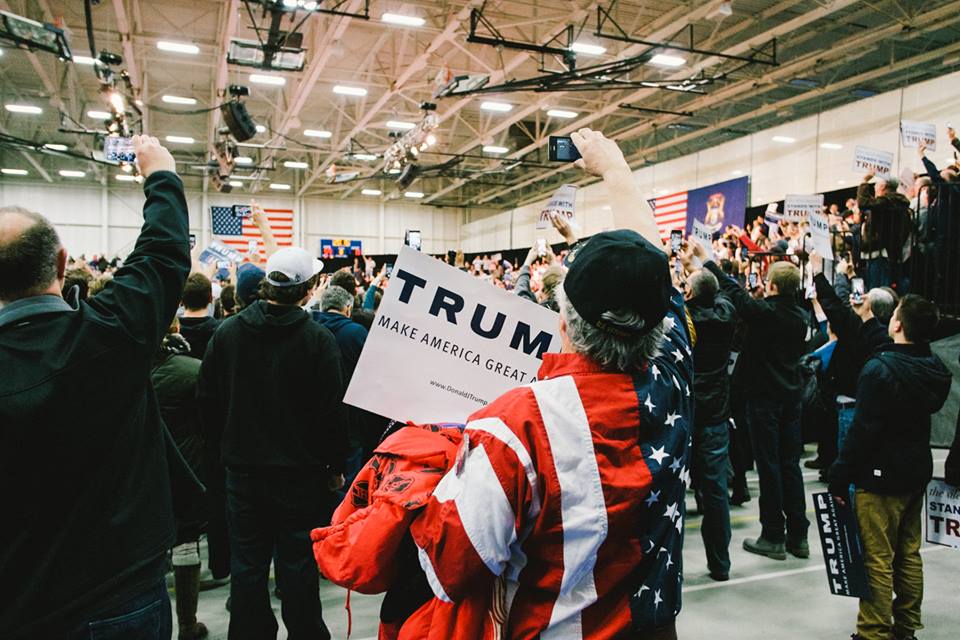 As Robert Lee Bailey approached the Macomb Community College Expo Center for the Donald Trump Rally in Warren, Michigan on March 4th, he thought he would be one of the first people to arrive. After driving all night from Pittsburgh, Pennsylvania in order to attend the rally, he found parking nearby, and at around 6am he began making his way toward the venue. After following a group of early rising Trump supporters traveling in the same direction, Bailey rounded the corner of a seemingly empty industrial complex and was surprised by what he saw. Already there were hundreds of Trump supporters lined up outside the venue, in long snaking queues that folded back and forth across the entire length of the building. 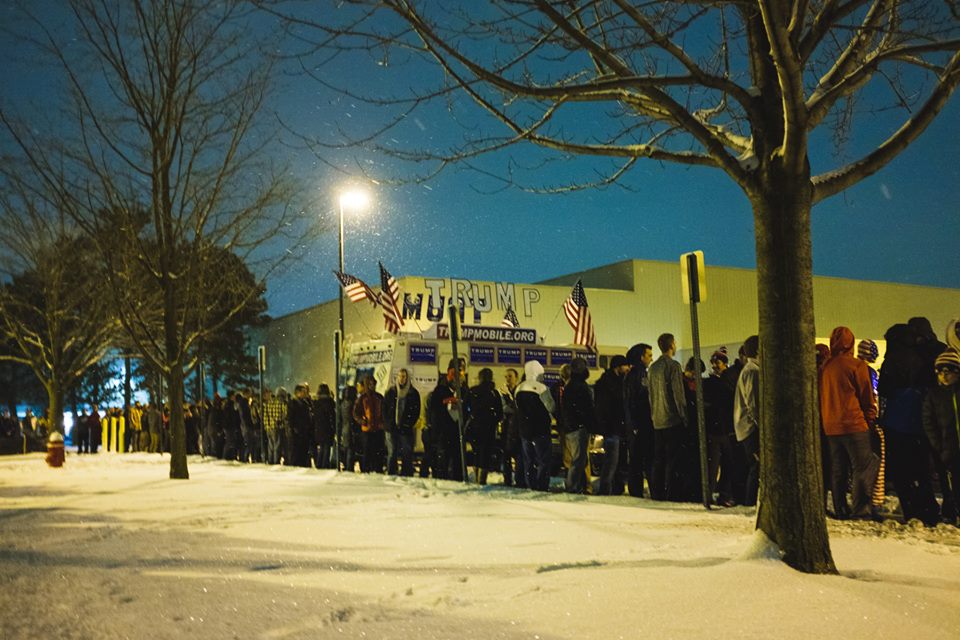 “When I saw the crowd and got in line, I had this moment of panic, like ‘What did I just get myself into?’ I thought that everyone would know I wasn’t one of them. Someone was selling Trump campaign buttons, and I bought three of them and pinned them to my coat and camera bag so if people saw me taking pictures they would just assume I was a supporter.”

Bailey made small talk with the Trump supporters in line and tried to blend in so that he would not be identified as a media photographer or protester.

“Trump rallies are really hostile to the media. Media photographers and reporters are all confined to a media pen in the back of the auditorium, and Trump refers to them as ‘scum.’ The treatment of the media is what finally made me decide to take a road trip to one of his rallies and photograph it undercover. I saw the video of Time magazine photographer, Christopher Morris, choke-slammed by a secret service agent when he stepped outside the media pen. I wanted to have the freedom to move around the auditorium and take photographs of both the protesters and supporters. I wasn’t interested in taking photos of Trump—there are enough of those out there. I would notice people who just stood out, like they didn’t look like the stereotypical Trump supporter, and sure enough, eventually I would see them getting kicked out one-by-one. Every time one of them would speak up during Trump’s speech, they would be instantly removed from the rally by the police and secret service. Although I was tempted to speak out, I kept my mouth shut because I wanted to stay for the entire duration of the rally and get as many shots as I could of the protesters being escorted out.”

One of the photographs that Bailey captured was featured on Buzzfeed later that week, showing a male Pakistani-American protester, wearing sunglasses and a sherwani, being escorted out by secret service agents after shouting “Not all Muslims are terrorists!” from within the crowd. 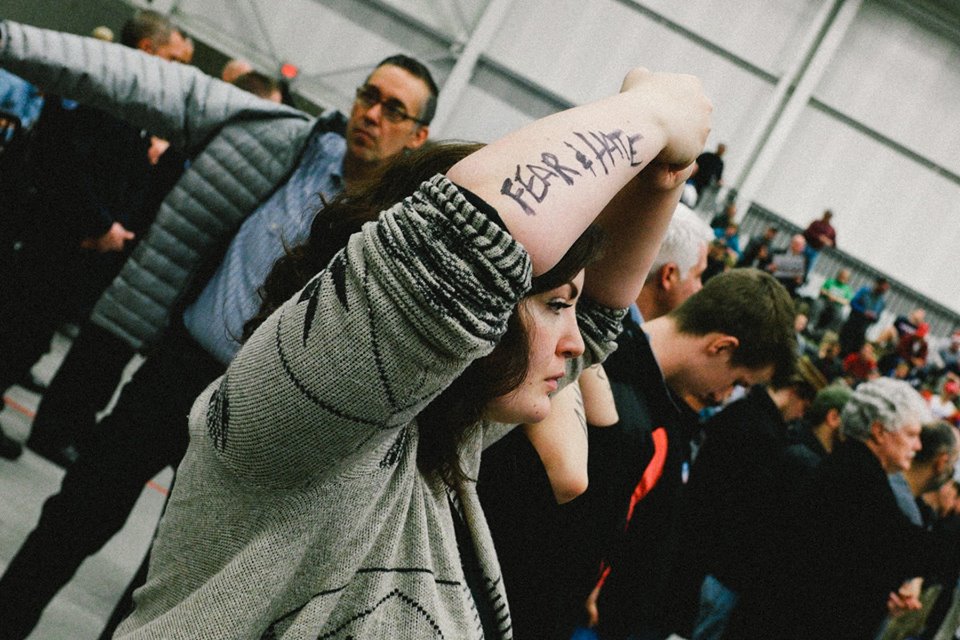 Two other women protesters posed silently with their arms linked above their heads, their forearms reading “Fear & Hate.” When they attempted to position themselves in front of the cameras recording the event, they were quickly escorted out of the building.

Bailey commented on Trump’s charisma during his address.

“I hate to say it but I can kind of understand Trump’s appeal—he’s entertaining, he’s funny… you can almost forget about how unprecedented and scary the stuff he’s saying actually is. Trump made a comment about how the one protester looked like an Elvis impersonator. He said, ‘That’s strange. He looks like an Elvis impersonator. That’s strange because all the Elvis impersonators love Donald Trump. They love me. That’s very sad. That makes me very unhappy.’ And just when you’re thinking to yourself, he’s actually kind of funny, in the next sentence out of his mouth he’s encouraging his supporters to assault the protesters who act out during his rallies. He said he would defend his supporters in court if any of them were arrested for assault against a protester. That’s another reason why I wanted to see one of these rallies firsthand. At the same rally where the Time magazine reporter was assaulted by the secret service, there was a black woman assaulted by white male Trump supporters. So it was clear to me that Trump is a bully, and he attracts other bullies. His supporters are drawn to his rallies because of the excitement and the possibility of conflict and violence that the presence of protesters create.”

Bailey also captured intense moments between Trumps supporters and protesters outside the venue after the rally. 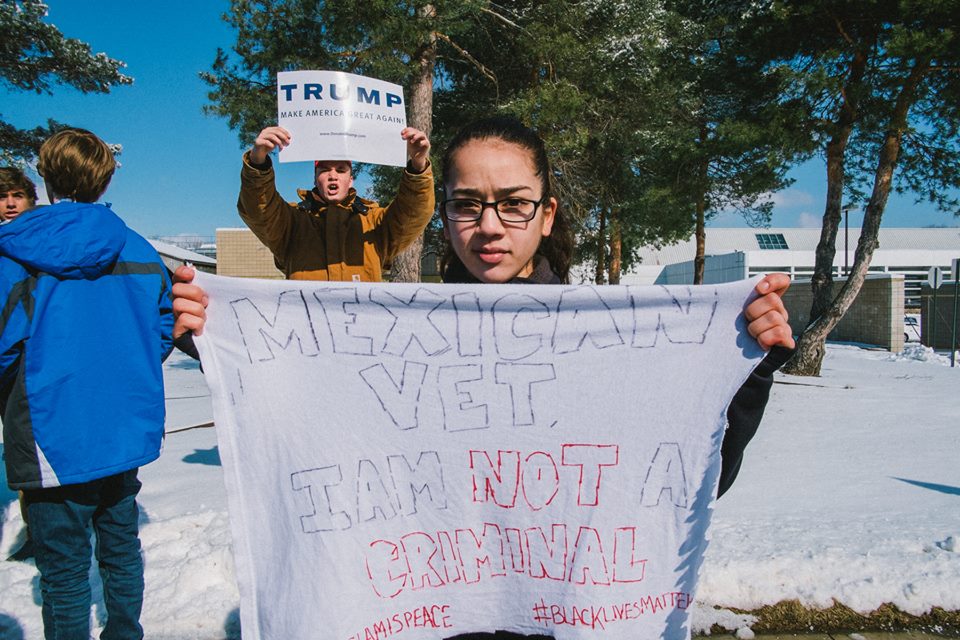 “Because the rallies are a private event, Trump can pretty much kick out anyone—and he does. But the protesters outside the rally are usually on public property and they’re protected by the First Amendment. So it’s a lot more confrontational and face-to-face. If the Trump supporters want to shout something demeaning, they have to look these protesters in the eyes when they do it.”

Bailey’s photographs offer an illuminating glimpse into the reality of the discussions surrounding the legacy of racism in America.

“One thing that caught me off guard was how many of Trump’s supporters at this rally were 15-year-olds with braces who came with their parents. I guess Donald Trump really appeals to that demographic. They were the ones who were really antagonizing and mocking the protesters outside. And in some cases their parents were right there while this was going on, either watching from a few feet away, or right there alongside them. There’s one photo where this teenager and an adult, who I think was the teenager’s father, are side-by-side confronting a Black Lives Matter activist—it was this really long, tense confrontation that almost turned into a physical fight.”

Although not everyone at the rally was violent or aggressive about their views, Bailey was deeply disturbed by what he experienced.

“Even as the crowds were dispersing, you could still hear them chanting ‘USA, USA!’ or ‘Build a wall, Build a wall!’ from the auditorium and parking lots. I was on edge until I got back in my car. As soon as I got back to my car, I unpinned the Trump campaign buttons from my jacket and camera bag and put them in the glove compartment box. I didn’t even want to leave them in plain sight. If I had gotten in a car accident, I didn’t want Trump campaign buttons to be the first thing they saw when they pulled me out.”