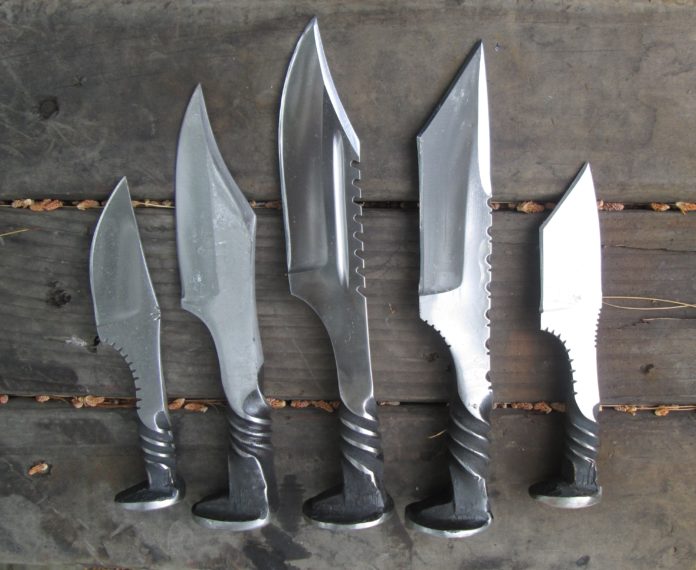 “I once cut my thumb to the bone with a sword on national television,” Andy Alm says matter-of-factly as he sharpens a hawk-bill knife.

He moves the blade up his arm and a smattering of fine hairs falls to the ground. With a satisfied nod he sets the finished weapon aside and retreats to his backyard forge to bang out another one.

This is the knife life.

Alm is one of thousands of people across the country who is bringing the ancient art of blacksmithing into the 21st century.

The 30-year-old, who appeared on an episode of History’s Forged in Fire competition series, took an interest in the craft when he was a student at Hampton High School. Thanks to supportive parents, a dedicated shop teacher and YouTube metal-working tutorials, what started as a hobby soon turned into an obsession. For fun, Alm transformed industrial lawnmower blades into machetes and railroad spikes into meat cleavers.

Despite a few nicks and cuts along the way, Alm was able to hone his skills, quit his day job as a radio DJ and focus on making kick-ass cutlery full-time.

He’s shipped his wares to customers on every continent except Antarctica and has 31,000 Instagram followers, including Gary Holt of Slayer.

The guitarist ordered an ornate Damascus steel dagger, which Alm personally delivered to him when the thrash metal band brought its farewell tour to town in June. In return, the bladesmith received tickets to the show, backstage passes and a well-deserved devil-horns salute. 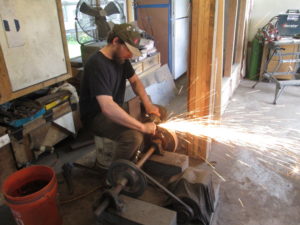 Fittingly, it’s hot as Hell in Alm’s ramshackle workshop, which houses a collection of Medieval-looking tools and a propane forge that heats up to 1,500 degrees Fahrenheit.

The neon-orange glow of hot metal illuminates his face as he pounds the pointed end of a railroad spike – his preferred medium, which he orders by the gross – into a crude, knife-life shape. Using a stone wheel and a series of belt sanders, he grinds and polishes the dull blade until he can see himself in its newly mirrored surface.

“Forging the metal is the easiest part of the project,” he says.  “It’s the grinding that’s the art form.”

Alm is a traditionalist when it comes to his trade. He learned blacksmithing basics at the Depreciation Lands Museum, a sort of live-action time capsule in Allision Park where costumed docents re-enact 18th century life.

Last year, he went to Pakistan – a major exporter of fine cutlery – to practice age-old techniques with master bladesmiths, which he believes sets him apart from his peers.

The popularity of shows such as Forged in Fire and Game of Thrones have novices clamoring to pick up a hammer and tongs. Alm is even toying with the idea of teaching classes. 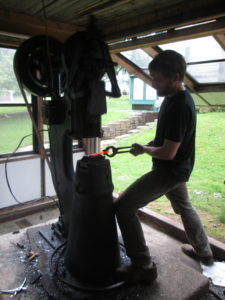 “It’s a fad now,” he says of the boom in blacksmithing. “It created a lot of competition, but it’s forcing everybody to make a better product. Overall, I think it’s good for the craft.”