Join us for an evening of global freedom music with the award-winning revolutionary jazz ensemble The Afro Yaqui Music Collective performing Mirror Butterfly: The Migrant Liberation Movement Suite, and poetry by Magdalena Gómez’s Erased: A Poetic Imagining on the Life of Arturo Alfonso Schomburg.

Arturo Alfonso Schomburg, was a historian, writer, and activist. Schomburg was a Puerto Rican of African and German descent who moved to the United States and researched and raised awareness of the great contributions that Afro-Latin Americans and Afro-Americans have made to society at large. Unfortunately, his legacy has been largely erased. Bronx born Boricua, Magdalena Gómez, is the current Poet Laureate of Springfield, the third largest city in Massachusetts. Her poems and plays have been published and performed in the U.S. and abroad since 1976.

The Afro Yaqui Music Collective is a postcolonial big band which imagines a world where many worlds fit. The band is part of the legacy of the asian-american composer-activist Fred Ho, and their music draws from mainstream jazz, the avant-garde, and traditional forms from both Africa, East Asia, and American Indigenous nations. At times aggressive and caustic, it is deeply engaged in ongoing struggles for social justice and revolution. The Afro Yaqui Music Collective has been called “percussively driven and mighty.” — WNYC’s New Sounds, “thrilling, head-bob-worthy, and deep” (David Bernado, Recital) and “maybe the most inspiring musical experience of your life.” (Robin D. G. Kelley, author) and the band has been presented at an eclectic set of venues over the country, including through Lincoln Center and Red Rooster in Harlem, the Free Library of Philadelphia, Vibrato Jazz Club in Los Angeles, and universities around the Americas from Pittsburgh to Vermont, to Mexico and Cuba. The collective is a site of several intercultural and transnational collaborations, working with musicians, poets and dramaturgs from Cuba, Mexico, Brazil, Chicago, Brooklyn, Wisconsin, and Pittsburgh.

AYMC is co-led by Gizelxanath Rodriguez, a Mexican operatic vocalist and cellist of Yaqui indigenous descent who is an internationally performing soprano and activist, and the recipient of a 2014 Latin ACE Award. Gizelxanath co-leads the band with her partner, Ben Barson, a composer and baritone saxophinst who recently won the Johnny Mandel Prize, the highest honor in jazz composition, from ASCAP. Barson and Rodriguez have created mixed-media work with a diverse group of poetic-playwrights, including Magdalena Gomez and Ruth Margraff, the latter who is the librettist for the Collective’s latest work, Mirror Butterfly: The Migrant Liberation Movement Suite, premiered in October at the New Hazlett Theatre in Pittsburgh, PA as part of their CSA residency, and acclaimed by audience and reviewers. Excerpts from Mirror Butterfly will be performed this evening. 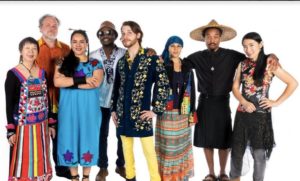