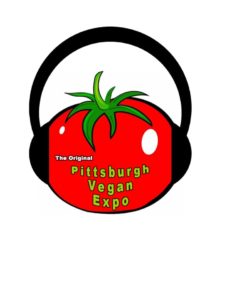 That’s right – We are moving to Monroeville Convention Center!

This will be, by far, the BIGGEST AND BEST vegan event our city has ever had!

A few of the many great highlights this year, in addition to the BEST food, desserts and products:

– Dean Caliguire, is a former Pitt Panther, San Francisco 49er and Pittsburgh Steeler, who went plant-based, and healed a list of health problems

– MMA fighter, Khama Worthy, who just won his debut fight in the UFC, will have a booth for his MMA and fitness studio (The Academy: Pittsburgh MMA and Fitness)

-Sally Lipsky, PhD, author of Beyond Cancer: The Powerful Effect of Plant Based Eating

-Dominic A Brandy, MD, author of Beat Back Cancer Naturally

-Joel Holc, energy awareness coach and an emerging author of The Eggshell Effect

-Mrs. Claus (take photos of your kids with her!)

Vendors, you do not want to miss this huge opportunity!
Email pittsburghveganexpo@gmail.com for info.

Amy “Amethyst” Cottrill, is the creator and originator of Pittsburgh’s longest-running vegan festival, having started with smaller community events in the 90’s, which gradually grew into the current expo!
For many years, the event was moving around, until it settled on the north side for years (that location was suddenly taken by an unassociated group), then moved to the north hills, and now is getting huge and has moved to Monroeville Convention Center!

Not to be confused with other unassociated festivals, this particular event is our city’s original, largest, and longest-running; and now in Monroeville!

Amy “Amethyst” Cottrill is the contact, at pittsburghveganexpo@gmail.com, to discuss opportunities with Pittsburgh Vegan Expo.
412-225-3302

There will be a $5 admission for adults, to help fund this ever-growing event. Children 16 and under get in free.

Admission includes entry, and there will be free entertainment with admission. There will be (limited) food samples. Vendors will sell food, desserts, gifts, services.

While advanced tickets are highly recommended, cash tickets (also $5) will be available at the door, so don’t worry!