When restaurants shut down in March, Mark Mammone and Joe Bardakos found themselves in a pickle.

The friends, both chefs at Piccolo Forno in Lawrenceville, suddenly had no outlet for their culinary creativity. Mammone, who, for years, has been making his own pickles, decided to go pro with the hobby and recruited Bardakos to help. 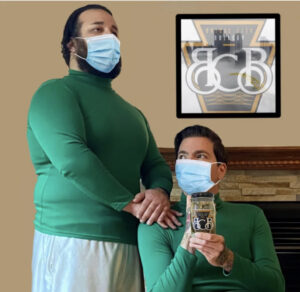 These aren’t your run-of-mill dills. Instead of soaking cucumbers in vinegar, the Bridge City guys ferment the veggies in homemade brine that includes fresh dill, onion and garlic. The old-fashioned method, which takes about eight days, creates more flavorful pickles.

So, why doesn’t everybody do it that way?

“It’s a very closely monitored process, down to the room temperature,” Bardakos says. “If you aren’t super-vigilant, there’s a lot that can go wrong. We taste the brine and a cucumber every day. They change so much from Day One to Day Eight, when they’re ready to sell.”

Sixteen-ounce jars of Smithfield Sour Dill Pickles are $7 each. Order yours through the company’s website www.BridgeCityBrinery.com or send an email to bridgecitybrinery@gmail.com.

Mammone and Bardakos, who use Piccolo Forno’s kitchen as a sort of mad scientist pickling lab, are experimenting with different flavors – including a hot pickle – and vinegar-based formulas. Eventually, they want to collaborate with local eateries and businesses. 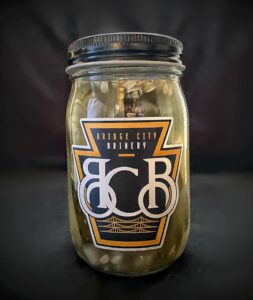 Even after a 12-hour shift making Italian dishes, the pair will work through the night, perfecting pickle recipes and transforming 300 pounds of Kirby cucumbers into sour dill delights.

It’s an opportunity they relish.

“We take what we do very seriously,” Mammone says, “but we like to have fun with it.”
Photos courtesy of Bridge City Brinery.