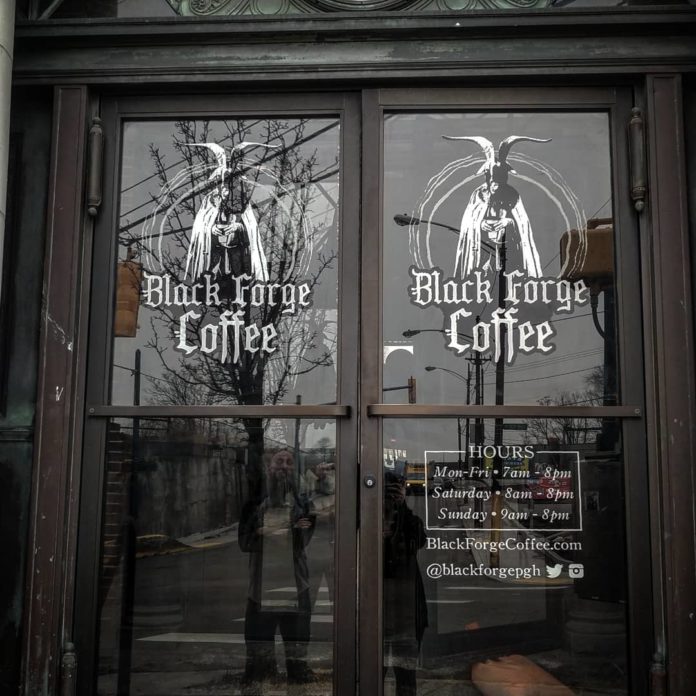 Black Forge Coffee House makes one hell of a cup of Joe.

But, don’t let the ominous logo and decor fool you … the folks inside are friendly. 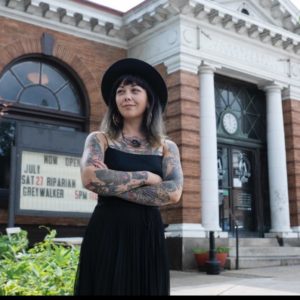 “A lot of people might pass by and think, ‘What is this Satanic cult in this old bank building?,” says owner Ashley Corts, referring to the company’s new McKees Rocks location.

At the original hotspot in Allentown and the sequel on Chartiers Avenue you’ll see metalheads rubbing tattooed elbows with guys in business suits and grandmotherly types knitting as they sip Earl Grey. One thing is clear: they’re all there to worship caffeine.

In addition to drip coffee, roasted on-site in the Rocks, you can order Gryphon’s Tea, pastries from 350° Bakery and sandwiches from Black Market Deli. Specialty iced beverages are priced at $6.66. Indulge in Ritual Rites, a wicked combination of toasted marshmallow, dark chocolate, espresso and milk. Go ahead, be bad and top it off with some whipped cream.

To make the drinks, Black Forge baristas use a state-of-the art Modbar espresso system that hides most of the components under the bar. Strike up a conversation. Employees are usually caffeinated and chatty.

Corts strives to be a good neighbor, even through controversy.

After Allentown residents complained about noise erupting from the tiny Arlington Avenue site (a popular place for metal and punk shows), Corts began searching for a second location where bands could crank it to 11 without the backlash. 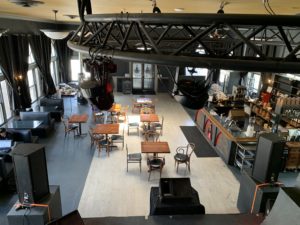 The new, 6,000-square-foot space opened in July and immediately generated an unwanted buzz (an employee, who has since been fired, refused service to a police officer.) Because the location doesn’t get a lot of foot traffic, Corts is summoning customers through a variety of events, from drag queen brunches and wine-and-cheese pairings to yoga sessions and hardcore shows.

Corts, an Allentown resident, is hellbent on giving artists and musicians a place to channel their creativity … and patrons a place to find true love.

She’s planning a Valentine’s Day party where couples can come in and learn how to roast.

Black Forge II is closed on Oct. 25 to host a wedding service. With its black walls, cathedral ceilings, ornamental pentagrams and dark artwork by Maxwell Pokrzywa, the place does look like a Satanic temple, but a large skylight bathes mortals in sunshine. 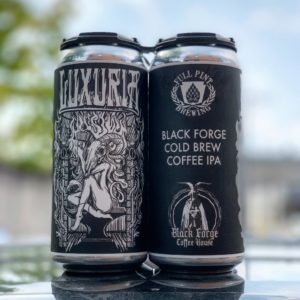 No alcohol is served on the premises, but Corts says she’s thinking about making the space BYOB (a dicey prospect when you run an all-ages performance venue.) Black Forge recently teamed up with Full Pint Brewing Company to create Luxuria, a cold press coffee IPA available at the North Versailles brewery and its Wild Side Pub in Lawrenceville.

Over in Allentown, things are still bumpin’, just not as loudly. The shop still holds acoustic and spoke word performances and is a gathering place for horror movie buffs, crafters and podcasters.

“A variety of people are coming in to experience different things,” Corts says. “We would love to see more people to come up and see what else is available in the area. At the end of the day, a neighborhood is a family.”