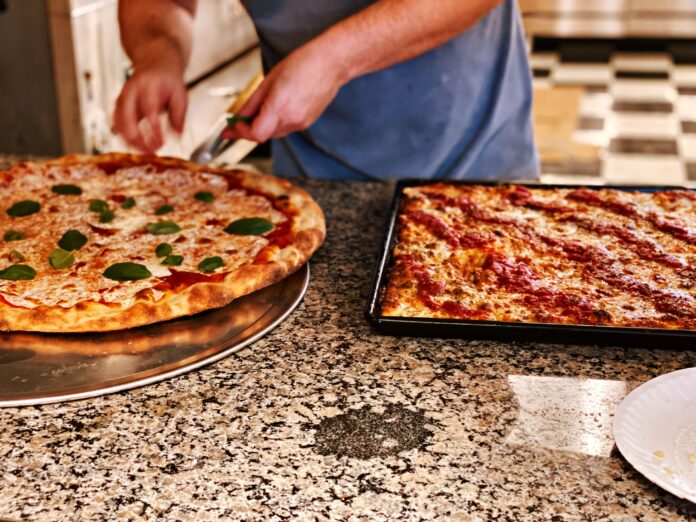 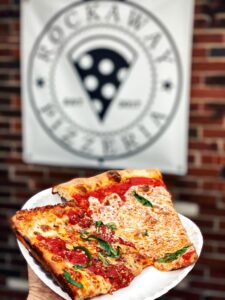 Before opening Rockaway Pizzeria in 2017, Josh Sickels spent a lot of time perfecting his recipes.

“I experimented for nine months,” he says. “I gained 20 pounds.”

The White Oak eatery is his baby.

The popularity of his New York-style pies – which are beloved by foodies and no-frills eaters alike – caused him to quickly outgrow the tiny, take-out joint. After months of COVID-related delays, his new, dine-in spot, Rockaway Pizza 2.0, debuts on Nov. 14 at 1949 Lincoln Way.

In addition to the 18-inch, 8-cut monsters, specialty offerings and hoagies that put him on the map, he’s unleashing more mouthwatering menu items. The Grandma Pie, for instance, is a pan-style pizza with red sauce, basil, garlic, olive oil, freshly shredded mozzarella and a coating of sesame seeds on the bottom. 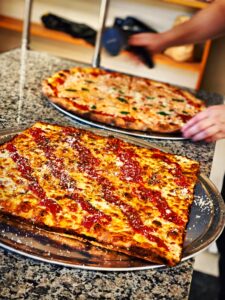 I was ready to chow down mere seconds after Sickels removed ol’ granny from the oven and placed it in front of me, but he suggested I wait six to eight minutes for it to cool and coagulate. Patience is not a virtue I possess, but I managed to hold off for five minutes and 59 seconds.

I devoured three, large squares in about as much time, pausing only to ask Sickels about his life and work.

Growing up in Irwin, he had two dreams: to play music and own a pizzeria.

He spent many years as a touring drummer headquartered in New York City, where he ate a lot of pizza and tried to recreate the flavors in his kitchen.

“I wanted to have something else to do that was creative,” says Sickels, whose current band, Animal Scream, released its debut album in July. “I learned everything there was to learn about New York-style pizza.”
He idolizes old-school dough-slingers such Domenico De Marco, an Italian who opened Brooklyn’s famed Di Fara Pizza in 1965.

“He revolutionized the street slice,” Sickels says. “If an alien landed on Earth and asked, ‘What is pizza?’ I’d hand it Dom’s pizza.”

When Sickels returned to Pittsburgh, he was determined to bring Big Apple-caliber slices – the kind that would make a Teenage Mutant Ninja Turtle scream “Cowabunga!” – to the ‘burgh. He hung a photo of De Marco in the kitchen to oversee the establishment like some kind of culinary angel.

Guests can watch Sickels in action as they wait for their pizza, pass the time in a small arcade in the back of the restaurant or just sit and listen to music. The Ramones, of course, are in heavy rotation at Rockaway.

In such a surreal, confusing year, it’s fitting that the décor of the new space pays homage to “Twin Peaks,” David Lynch’s cult classic TV series. The former doctor’s office now has a black-and-white checkered floor, red booths and artwork inspired by the campy melodrama.
I think FBI Agent Dale Cooper would agree that Sickels makes a “damn fine” slice of pizza.