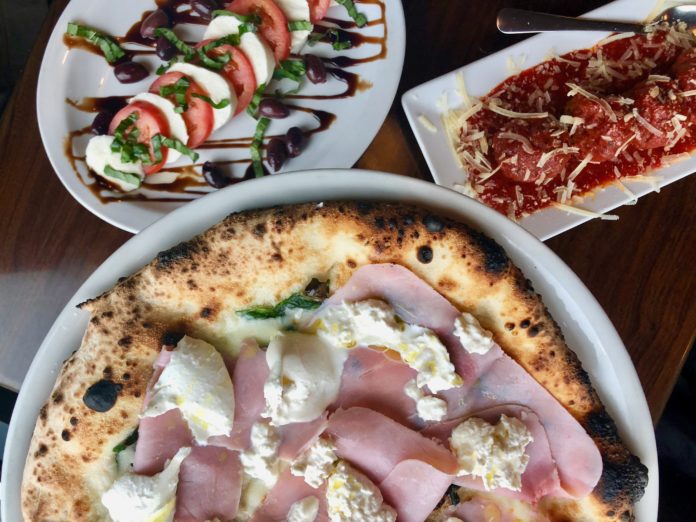 We sat down with Vince one of the partners (his brother is the other) to learn a little about their Italian restaurants. A stable in the east, steeped in family traditions and recipes, we learned a lot and left STUFFED!

LOCALshoppper– Where did you get started? Where was the original restaurant?

Vince Pasqualino– Our original restaurant was farther up in the Penn Hills area; in the 1970s … Starting on August 1, 1971, it was called Pizza Palace. My father and our uncle started it. Then our uncle got into another business and so his son Frank started working with my dad and they’re still working today. You must know Frank, everyone knows him?

LOCALshoppper– Yes, So they’re the ones running the pizza shop?

Vince Pasqualino-Yeah. There are pictures on the wall here of my dad when he started. I think he’s shredding cheese and stuff like that. I have dreams that I still work down there. We go back and I get the bag of cheese out, I’m shredding the cheese, just going down the stairs. When we were done we’d go down and wait till the rush was over so dad could drive us home.

LOCALshoppper– So when did you make the change from a pizza shop to a Pasqualino’sRestaurant?

Vince Pasqualino– Pizza Palace has a basic pizza shop menu. In 1986, we moved from the old location to where we are now, which is across from Arby’s. Now we had to expand the menu. As time went on we would add items, pasta dishes and soups. We just adjusted the menu slowly.

LOCALshoppper– So at this point you are still Pizza Palace?

Vince Pasqualino– Yes, and December 1st of 2000 we opened up in Murrysville, We were called Pizza Palace Express with delivery. We eventually opened a larger location and decided we needed to change the name to avoid confusion, that was in 2003 or 2004.

LOCALshoppper– So when did you make the final move to this location and add the wood fire pizza oven?

Vince Pasqualino– In 2014 we opened up here, with a new menu, larger lounge area and private dining space.

LOCALshoppper– Now you also have a location in Irwin.

Vince Pasqualino– It’s actually North Huntingdon. We had a Pizza Palace Express out there and when our lease was up we decided to move and change the name to Pasqualinos. That was 2005.

Vince Pasqualino– Similar but they do not make their own fresh pasta and do not have the same pizza ovens.

LOCALshoppper– Your recipes, are they family?

Vince Pasqualino– Most of them are, the one you had there is a classic (Pasta Classica Our famous tomato sauce, your choice of imported spaghetti, rigatoni, penne or capellini with homemade meatballs),  I consider it cover music. It’s like doing a classic Rolling Stones cover song, you do it the same way, keep all the integrity and it remains a classic.

LOCALshoppper– Do you guys handle different sides of the businesses?

Vince Pasqualino– Yeah, he does more of the catering, I do the menu, more of the bookkeeping, which I hate. We all, we do different stuff, at the same time we all do whatever it takes.

LOCALshoppper– Any plans for the future you can let us in on?

LOCALshoppper– Well, thanks for sitting down with us today, and of course feeding us!