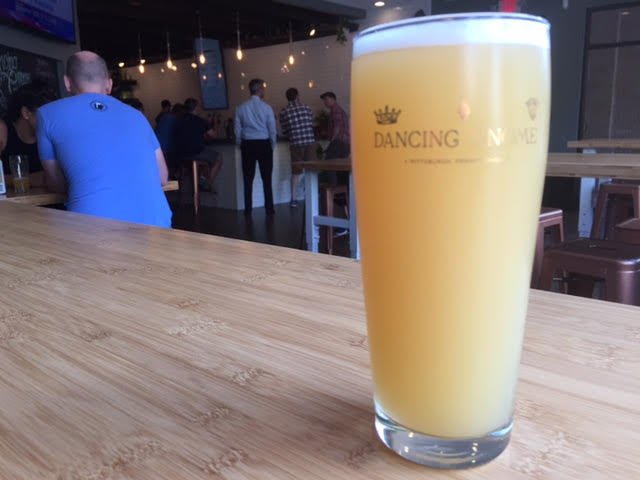 Sessionable is an up-close look at libations destinations throughout the Pittsburgh region. Discover where to go and what to expect as you explore our city’s incredible adult beverage scene.

I arrived around 5:00pm on a Thursday to grab a fresh-off-the-canning-line 4-pack of Lustra – a juicy, hazy American Pale Ale that left me consulting the nearest search engine for ways to hook beer directly to my veins the first time I encountered it. Much to my chagrin, the daily grind of Pittsburgh rush hour cost me my bounty as my fellow adult beverage brethren depleted the stock in under 30 minutes. I took solace in the fact that Lustra was flowing in abundance from the taps, so I pulled up a stool at one of Pittsburgh’s fastest-rising craft breweries and imbibed with a big, fat smile on my face…knowing one day, those cans would be mine.

The fact the 4-pack eluded me didn’t surprise me one bit. After all, this is Dancing Gnome in Sharpsburg…undoubtedly, one of Pittsburgh’s most popular craft beer destinations – a title that’s been earned by founder and brewer Andrew Witchey and his crew in less than a year of pouring beers for the thirsty population of Pittsburgh. Dancing Gnome is a living, breathing example of a fundamental truth in the beer business: put clean, quality, approachable liquid at the forefront of your operation and the masses will instinctively flock like the salmon of Capistrano.

It doesn’t hurt having a welcoming taproom as well.

Before we get into the Dancing Gnome experience, let’s take a minute to discuss the so-called “Vermont Style IPA.” This soft, hazy “subset” of the India Pale Ale offers a different profile than other IPA subsets. For example the “East Coast Style” IPA is typically more amber in color and tends to be a bit more malt-forward with an herb-like hop character while “West Coast Style” IPAs are more golden in color and contain a piney, citrusy hop character. The Vermont Style, as mentioned before, is more on the soft side in mouthfeel with a bright gold color and hazy, cloudy, turbid appearance on the eyes. The hop flavor and aroma is slightly dense and the bitterness is dialed back to some degree, allowing for a balance between the malt and the hops. They present a refreshing, juicy flavor that’s very unique and incredibly drinkable. 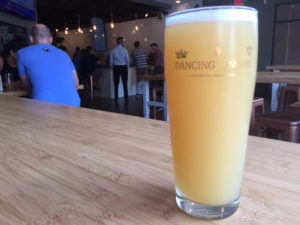 So, why the knowledge drop? Simple: Dancing Gnome has put this style center stage and has brought some incredible hop-forward beer to fruition utilizing this blueprint. That’s not to say Andrew and company won’t venture down the path of a coffee stout, summer porter, or farmhouse ale to round out the lineup, but the hazy offerings leaving the tanks in Sharpsburg have been delicious, palate-satisfying grand slams across the board. The aforementioned Lustra, Better One Or Two, Jam, Pounce, and Exquisite Beast are not only badass beer names, but dynamic representations of a style still coming into its own throughout the craft beer landscape.

It’s not uncommon for new beer drinkers to dismiss the IPA due to bitterness, a taste that’s acquired and easier to accept as the palate evolves. However, the lineup at Dancing Gnome is a walk on the softer side and can serve as a beautiful comeback moment for those who have written off IPAs altogether. You may never return to the triple-digit IBU hop bombs that rip the enamel off your teeth, but a pour from the Dancing Gnome taps can introduce you to hop varieties and the magic they bring to the liquid in a much more subtle exhibition.

Dancing Gnome’s taproom, located at 925 Main Street in the heart of Sharpsburg, is warm, convivial, and comfortable. Subway tiles serve as the backdrop to the L-shaped bar and feature treated wood shelves that provide a home for plants, various growlers, and Dancing Gnome merch. A ledge parallel to the bar and high-top tables provide a place to sit and relax while peering through a large window into the brewhouse where water, barley, hops and yeast join forces to bring you some damn fine liquid.

If you’re hungry, Dancing Gnome has partnered with several of Pittsburgh’s food trucks to ensure a bite to eat is never too far away. They routinely release cans of different beers at various points throughout the week, so stay close to their website to see what’s coming next.

There are several reasons to visit Dancing Gnome, but one reason in particular stands out: you’ll be going one on one with a beer you’ll love. It’s inevitable. This destination that’s quickly ascended the ranks of go-to local breweries would not have done so if they weren’t consistently delivering a product that’s pushing the evolution of Pittsburgh craft beer forward.

Put clean, quality, approachable beer at the forefront of your operation. Dancing Gnome has this philosophy on lockdown.