Kimee Massie’s voice reverberates above a pulsating beat that shakes the floorboards. Flickering candles provide the only light.

“If you’ve done yoga before, this is probably darker than you’re used to — in the lighting and in the music,” she says, dropping into child’s pose next to a mural of the Grim Reaper.

While it isn’t my first time practicing this ancient discipline (I took a class in a brewery once), it’s definitely the most metal.

In addition to good ol’ Death on the wall, there are little skeletons striking yoga positions around the room. With tattoos blazin’, Kimee stands between two large speakers like the lead singer of some bad-ass band.

Instead of emitting a guttural roar, she calmly instructs myself and the dozen or so other students to relax and concentrate on our breathing.

Kimee and her husband, Scott Massie, conjured up this Vinyasa-style yoga several years ago. They enjoyed yoga, but not the typical soundtrack of chirping birds and wind chimes. 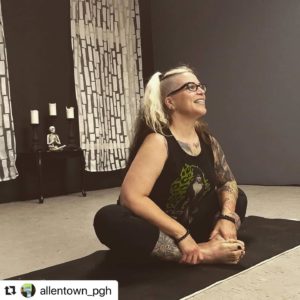 She’s a certified instructor, while Scott, the founder of Innervenus Music Collective and former vocalist for the band Storm King, curates the tunes. It’s not demonic vocals and wailing guitars, but bass-heavy tones that course through your body and put you in a trance-like state.

The Monroeville couple hosts an hour-long class every Tuesday night at their studio above the Brashear Association’s Allentown Learning and Engagement Center on E. Warrington Ave. Everyone, from novices to veterans, are welcome.

Now, I’m about as flexible as Frankenstein, but, with Kimee’s encouragement, I’m able bend in ways I didn’t think possible and let go of my worries.

Not only does BLACK YO)))GA provide a physical workout, it’s a mental exercise as well. If your’e like me, weighed down by anxiety and depression, the heaviness of the experience can actually make you feel lighter.

As the clock strikes 9 p.m. and our session comes to an end, we all sit cross-legged on the floor and take deep, meditative breaths.