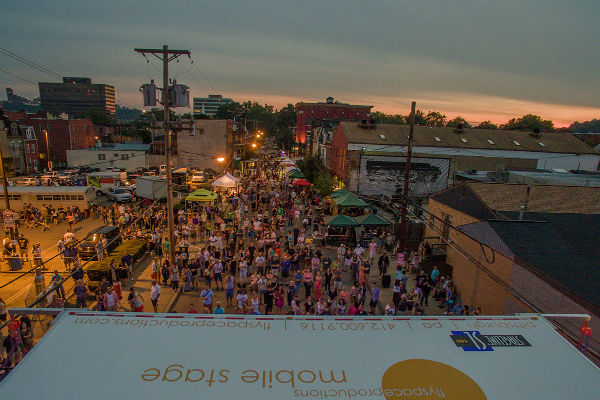 This year marks the fifth year for the Deutschtown Music Festival. The event is two days full of music and food in Pittsburgh’s North Side neighborhood. More than 200 performers will play at a variety of indoor and outdoor stages this year starting at 5 p.m. Friday, July 14.

The idea of the festival began over five years ago Deutschtown Music Festival creator, Cody Walters started a Deutschtown bar crawl. More people than expected came and enjoyed the bars in the neighborhood. During that time was the first year of Lawrenceville’s R.A.N.T. Music Fest, where a few Northsiders attended and figured they could create their own in the North Side.

“We also were not seeing the same economic benefits that were happening in Lawrenceville at the time and wanted to shine a light on the local business district,” Ben Soltesz, co-creator, said.

So how does an act get selected for the festival? More than 300 band submissions were sent starting in February, and Hugh Twyman, band coordinator for Deutschtown Music Festival had to choose. He looks for musical diversity when choosing the artists. This year several bands were chosen who had not previously played the festival.

“I always love the lineup at the festival,” Twyman said. “I feel there are so many stages this year that are worthy o the public’s attention in of themselves.”

Other than music, the festival will have food vendors from all of the city, workshops, a beer garden and more. The festival is also increasing family activities with help from a Family Engagement Initiative by the Buhl Foundation and the Northside Leadership Conference.

A new addition to this year’s festival is teaming up with the charity Team Tassy. The charity focuses on one community in Port-au-Prince, called Menelas. It’s a community of 500 families. The goal of the charity is to serve every single family member, addressing basic needs, work preparation and more. Deutschtown Music Festival sent 124 shirts to a family with their personalized names on the back. And with every shirt purchased at the festival, $1 will go to Team Tassy.

Celebrate the ongoing festival with music and entertainment on the North Side July 14 and 15. The event is free to the public. Find the full schedule here.