New psychedelic-soul rock band Cisco Kid has captivated the Pittsburgh music scene at local clubs and special events like Smallman Galley’s Street Party, Millvale Music Festival and Allegheny County Parks Foundation’s Pour at the Park, but it is not until next month that the band will release their first full-length album, Beautiful Day to Die.

I met with Cisco Kid to discuss the album and drummer Marc Martinka described Beautiful Day to Die as “an exploration of life’s themes of balance: life and death, love and hate, light and dark through the lens of soulful micro-dosed psychedelia.”

Bassist Martin Connolly added that “This year has upped the ante in terms of expectations for musicians producing music in Pittsburgh in a lot of ways.  There have been so many excellent records coming out locally.  We were determined to self-produce, while still putting out something that would be competitive in such a talented scene.”

I agree that the local music scene has had a recent boost of original bands self-producing quality music, and the bands are collaborating on projects and partnering to produce more shows. In addition to the hard work of the bands though, it’s up to Pittsburgh’s live music enthusiasts to attend local shows to drive the LOCAL music scene. 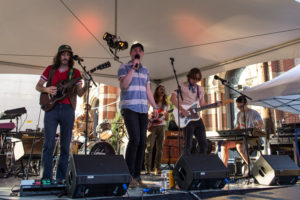 Cisco Kid’s Album Release Party will take place at The Funhouse at Mr. Smalls on October 6th featuring special guest The Telephone Line. Doors open at 8:00PM and the show begins at 9:00PM. Tickets are $5 and are available online via Ticketfly here. Connect with Cisco Kid on Facebook and on Instagram @CiscoKidPGH. And remember to go see live music!