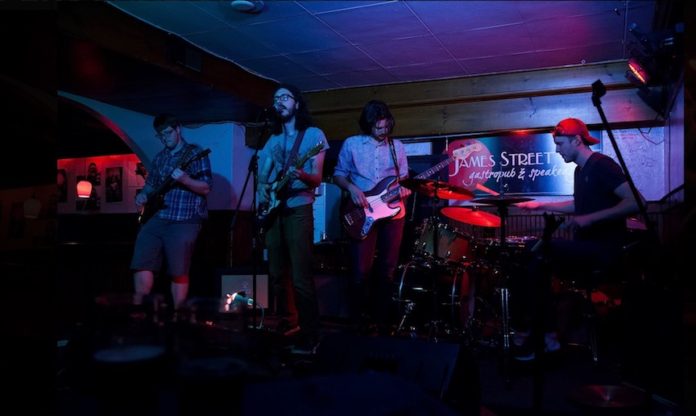 The Petals give the Pittsburgh music scene a special taste of post-modern rock along with hints of jazz influences. The band has been playing around the city for about a year now and recently released an album, Meld, in June. Love for the city, along with dedication for each member of the band keeps The Petals creating. We talked to Aaron Sheedy, singer and guitarist for the band to find out how The Petals began and what’s next. New music is on its way, so be on the lookout.

How did The Petals being this music journey?

“I started out playing music on my own. Occasionally I would play with friends or jam with some people but The Petals started as just a name for my solo work. It was a name I could put all my music under to keep it organized. I had recently been doing some small work recording music for short films and acquired more and more recording equipment. I could record my music whenever I wanted and often Trevor Hallinan, a friend of mine who is also into home recording, would lend a hand engineering as I played through all the instruments. It was all for fun because we shared an interest in the recording process and learning along the way. After a while, I realized I didn’t just want these songs to exist in recordings, I had as much fun playing it as I did recording it. Eventually we added Mike on Guitar, Colin on Drums, and Daniel on bass and soon The Petals became a physical band instead of just a collection. We’ve played for about a year now around Pittsburgh and have been able to release a CD and play around 20 different places throughout Pittsburgh. Looking forward, we’re hoping to record another album at a local studio and go on tour outside of Pittsburgh.”

How would you describe your sound? Do you fit a specific genre?

“We’re starting to understand our genre but being specific about it can still be difficult. I’d start by staying it’s ambient post-rock. It’s not an intimidating sound, so mosh-pits don’t really seem to turn up at shows. You fall into this groove with both the higher energy songs and the slower stuff. The slower stuff is cool because of the melodies and the lyrics which I spend a lot of time putting together. The pop-punk genre can focus on the energy and the face-paced drums and beat, whereas The Petals create this almost jazz infused environment that allows for experimentation instead of playing into expectations.”

What pushes the band to keep performing?

“The band, like myself, loves to play live. I think it’s the most fun we have as a band. It takes practice to pull it all off. Not just knowing what to play when, but how to interact from the moment you arrive to the moment you leave. A lot more takes place in that time period than just the show. Seeing a response from people, whether it be before, during or after just makes it a more personal connection. Everyone is just having a good time throughout the night and it brings us together even as a band to see it work out. If you’re just a studio recordist, you never get to see the response live as it happens. We’re lucky to be seeing results and that’s a good source of motivation. Every week, we try to grow just a little bit in some way. Seeing that progression forward keeps the motivation and morale pretty high.”

A new album is in the works; when can we expect to hear it?

“We’ve been writing songs since the release of our last album and fine tuning them ever so slightly over the past months so we could record our next album soon. We plan to begin the recording process in the next month or so forming relationships with talented producers and engineers to end up with an early spring release. We intend to press to vinyl and deliver a product jam packed with visual art and songs that we love playing.”

What are your plans for the rest of 2017? Any shows we can attend?

“The rest of 2017 involves a lot of studio sessions, practicing, writing, performing in any order they may arrive. We are playing at Mr. Smalls on December 16 alongside The Pink Spiders. As for other performances, it is likely more may arise that we’re not aware of yet so keep a look out!