So, you’re feeling adventurous and want to take a road trip that doesn’t involve an amusement park, woods, or feeding animals. You want to tackle New York City. You’ve seen all of your friends posts detailing every cliché picture in Times Square, saying how spectacular it is, and now, for some reason, they seem like well-traveled renaissance elitists. After one weekend, they now travel between Pittsburgh and New York “for work”. Overnight they’ve become power brokers of life. And now you want the same. But wait, there are a few things you should know before you fire up your trans am and hit the open road.

A Pittsburgher in New York, here’s your guide to survival

Roughly 5.5 hours from Pittsburgh gets you to New York. Be prepared for tolls, they’ll cost you about $20.00, most cars can get you there with a tank of gas.

If you’ve ever wondered what Dante’s 7th level of hell was, you’re about to find out. Driving in the city is a cornucopia of absolute chaos. There are a few important things to remember.

It’s the Wild West. Drivers make their own lanes, cars get uncomfortably close, make right turns from the middle lane, cut you off, and then speed away. It’s a sea of yellow cabs and cars that you cannot control. Best just to sit and let it happen. And I know you burghers have some type of weird hang up with people actually using the merge lane and never wanting to let them over, so here’s a friendly reminder that there’s no such thing as merging in New York. It’s just…car beside you one minute, same car in front of you the next.

The horn is the universal language of love. To a Pittsburgher, blowing the horn is the sign of ultimate disrespect. We would rather you insult our family tree than to beep on us to move along. In New York, you will hear horns all day, every day, and will most likely have a few horns blown on you. Don’t start cranking up your middle finger, it’s not personal.

Stay focused. In Pittsburgh, 3 out of 5 people are on a cell phone while they’re driving, but know that you’ll die a horrible death if you take your eyes off of the road in New York for more than 2 seconds. Things move 100 times faster than you could imagine, so being distracted will 10/10 lead to something bad happening.

Turn on Red is not a thing in the city. Don’t do it.

Making a turn takes an extra 5 minutes because there are herds of people in the cross walk.

Traffic cops will make you stop on Green and Go on Red…Just roll with it. They know what’s going on. 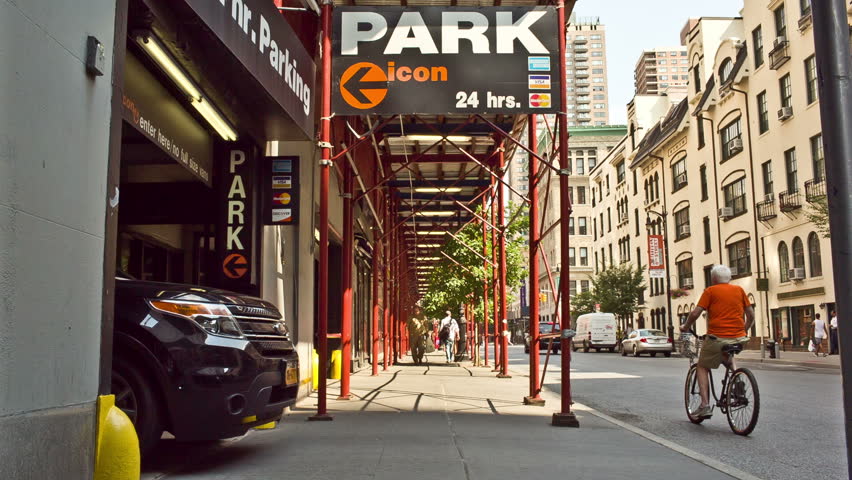 First off, if you find on street parking, don’t ever leave, or you’ll regret it forever. Second, learn how to parallel park, or New York will hate you more than it already does. Be prepared for parking garage sticker shock. A full day of parking in a garage will set you back between  60-100, with an extra charge if you have an SUV, Van, or Truck (Yep).

Parking is free on Sundays, and you can get away with parking in random places at night. Just remember to pay attention to the signs. “NO Standing” means you can’t sit in your car and wait. (The restriction is primarily directed at cabs and limos). Tickets flow freely in the big apple, and a tow will set you back about 500.00…Ain’t nobody got time for that.

Pay attention to walking signs, cabs will hit you. And that might ruin your trip.

A New York city block is like 5-miles long, so remember to wear comfortable shoes, or you’ll hate the world in about 20 minutes. Racking up walking miles in the city is effortless, so be prepared for a couple of inevitables.

Bathrooms. In an effort to make you more bitter, most stores don’t have public bathrooms. Even McDonald’s requires manager approval for tinkle activity. Look for anchor stores like Macy’s and Bloomingdale’s, or large hotels where you can slip in to the facilities.

Swanky Stores. There are loads of high-end retailers with fancy attendants in suits secretly judging whether you can afford a $20,000 handbag. Don’t fret. You’re on vacation, walk anywhere, and wear whatever you want. Camo, no problem. Marshall’s jeans, sorted… walk your ass right into that store and check out shoes that cost more than your car. It’s all good.

Trump. Since Donald Trump became leader of the free world, the level of annoying in New York has gone up by at least 300%. Secret service agents, police officers and other support staff are littered in the streets near Trump Towers as slack-jawed yokels snap selfies in front of annoyed military personnel with assault rifles. There’s now a screening area to enter the towers,along with a permanent human traffic jam. It’s awesome. 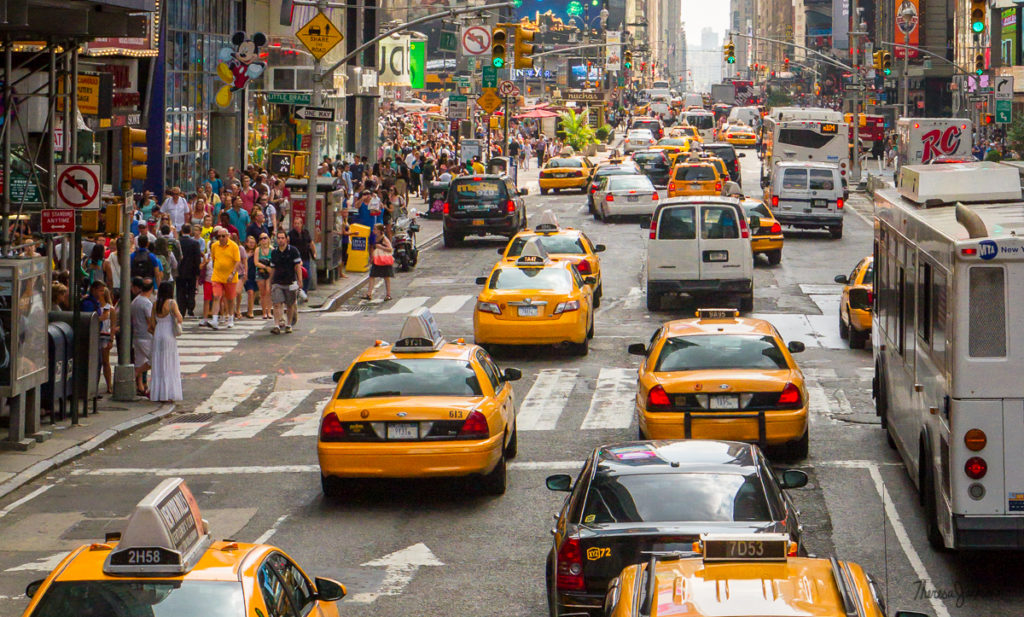 Cabs and Subways. If you want to pay buttloads of money to sit in traffic and almost get in a catastrophic accident every 3 minutes, cabs are plentiful in the big apple. Hailing a cab in the city is something everyone should experience, $30.00 for 2 blocks is not. Ride with caution. The subway seems to be the most efficient, and budget friendly way to buzz around the city, just keep an eye on which train you’re hopping onto. Once you get the hang of the system, navigating the city will be a breeze.

Stay away from pedicabs and carriages. In the city, a pedicab (guy peddling a bike with a passenger cart) charges as much as $8.99 a minute. Unless Cosmo Kramer is peddling, I’ll take a hard pass, thanks.

There’s a lot of it. Eat as much as you can. They’ll always be somewhere new to try.

There’s no acceptable reason to walk into TGI Friday’s while on New York soil.

There’s a restaurant/bar called Foley’s that loves the Steelers and has bathrooms from the 1800’s. The manager is from Pittsburgh, and his name is Jason. Tell him we sent you, and he’ll give you a hug.

There’s really no right or wrong list of things to see in New York. If you walk around long enough, you’ll bump into places you’ll probably find interesting. For example, on the Upper East Side, I stumbled across several consulates, including India and Pakistan.

I try to stay away from the tourist traps, because the city of New York offers so much more than Times Square. Every inch of every block breathes. We’ve added a couple of places that you should visit during your first time, but the best NYC tour is to explore at your leisure.

Central Park: A sprawling epicenter of green on the upper east side. Ice skating, food, and a zoo. It’s a must visit.

Bloomingdale’s: A gazillion levels of stuff, one more confusing than the next. But, a nice place to tinkle.

The Ferrari Store: Nope, I can’t afford a Ferrari. I can’t even afford to look at one for too long, but the store is super awesome, and they actually have stuff I can afford, like Ferrari cell phone cases, key chains, model cars, and apparel.

Times Square: It’s basically a live version of Facebook. A bunch of people shuffling around brightly colored screens clamoring for attention, clueless to the world around them. Also, there’s a full-grown man dressed as a mean looking baby that will just ruin your holidays.

Empire State Building: It’s cool to see, but unless you’re keen on paying 35.00 for an elevator ride, keep it moving.

The Lego Store: For legos

The Met: For Art

New York is not magical, it’s insanity. The traffic is horrendous, it’s generally over priced, and everyone seems either overtly aggressive or absolutely oblivious to their surroundings. You get lost in every sense of the word. The city, in essence, is a perfect representation of the universe, it chews you up and spits you out, and doesn’t care if you survive or succeed. If you want to know why New Yorkers are tough as nails, spend the weekend there. It’s a hard city to exist in.

On the other hand, New York is inspirational, especially for creatives, dreamers, and entrepreneurs. The sheer magnitude of commerce and opportunity is absolutely jaw dropping. The art is amazing, the theater is world-class, the food is to die for. So, dust off that terrible towel and give The Big Apple your soul for a few days. If anything, you’ll realize that in comparison to New York, Pittsburgh traffic is pretty much like waiting in line at Chipotle.