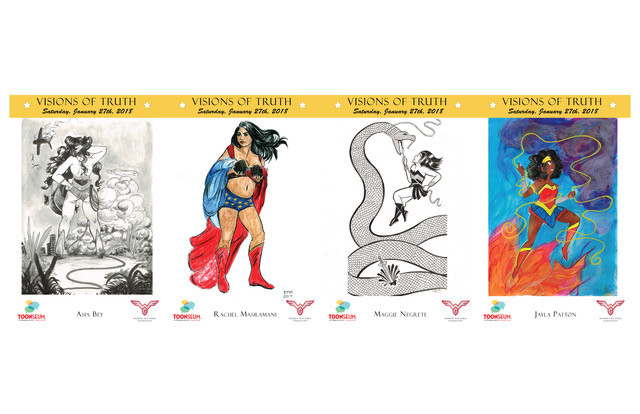 Since 1941, Wonder Woman – the iconic superhero – has changed lives, inspiring women and men alike with the unique character’s unequaled strength, compassion and power in her adventures on the page and on the screen, most recently in the 2017 DC feature film with Gal Gadot in the lead role.

As part of their latest art exhibit, the Toonseum will be hosting the event Wonder Woman: Visions of Truth on Saturday, January 26th at 6pm to evaluate the character’s impact on gender and identity as told by the local female artists she has inspired.

Maggie Negrete, Jayla Patton, Asia Bey and Rachel Masilamani are the four speakers of the evening, who will present on the importance of positive representation in the media and the unforgettable impact that these stories have on the audiences who read them.

Throughout the night, you will also get the chance to view and discuss the artworks, and enjoy snacks and drinks. Bonus? Free access to the museum until February 25 when the exhibit ends. This super event is one you and your friends won’t want to miss.

General admission is $40 and $25 for Women and Girls Foundation members. To buy tickets, you can visit the WGF website at https://wgfpa.salsalabs.org/wonderwomanvisionsoftruth/index.html

WONDER WOMAN: VISIONS runs at the Toonseum in downtown Pittsburgh through February 25.

Photo courtesy of the Toonseum.