“I think the story – person comes to war, person comes back – is one of the oldest stories that human beings tell each other.”

This is how now famous best-selling author and journalist Brian Castner describes the tale of his own memoir, The Long Walk. In the book, he tells the events of his return home after working as an EOD officer during the Iraq War, his struggles after a blast-induced traumatic injury, and his journey to come to terms with himself and life back at home with his wife and children.

Jeremy Howard Beck transformed this true story into a contemporary opera, which originally premiered in New York in 2015 with the title role played by Daniel Belcher. It has since been performed in Salt Lake City, Utah, and now is being produced by the Pittsburgh Opera with resident artist baritone Ben Taylor taking on the role of Brian Castner.

Speaking about the character as portrayed in the opera, he said, “He’s very disconnected with reality. He’s searching for answers. He’s a brilliant guy and a great father and a great husband. Pre and post war, of course. He just wants to fix things…They call it the long walk because of the solitude of walking to this bomb by yourself and presumably to your own demise. That’s unfathomable to me – to knowingly go out and put your life in your hands to save others, it’s absolutely beautiful. With that, he shows that he has a capacity for this deep caring and this deep love.”

A young artist who grew up in Maryland and studied in Boston, Ben Taylor is known primarily for his roles in classical operas such as Madame Butterfly, Barber of Seville, and Tosca (which he performed at the Pittsburgh Opera). For him, taking on the role of a real-life Iraq veteran was both a challenge and a gift.

“It’s an awesome story and character to portray,” Taylor explained. “I have a lot of military family and one of my best friends, he served in Iraq and Afghanistan and he suffers from PTSD. To be able to see where he’s coming from… to get a glimpse in that side of the life, it’s amazing. It’s amazing for the audience to see that, as well…It’s a great opera of showing that if someone has an ailment or a symptom that curing it isn’t the only option, learning to live with it and learning to adjust is just as ok…”

The opera is a departure from what most audiences might expect. The dramatic story focusing on both the pain and joy of the human experience is undeniably fitting for an opera, but the mix of classical and modern instruments – such as an electric guitar, bass and strong percussion section – and constant action onstage is wholly unique.

“When I got the score, I was like ‘Aw man, okay,’” Taylor said. “It pushed me to the limits but what doesn’t kill you makes you stronger and afterwards I feel my musicianship grew…”

While the music itself offers plenty to enjoy on a technical and artistic level for traditional opera-goers, the opera’s greatest hallmark is its capacity to move audiences of all tastes and backgrounds, opera fans and newcomers both. 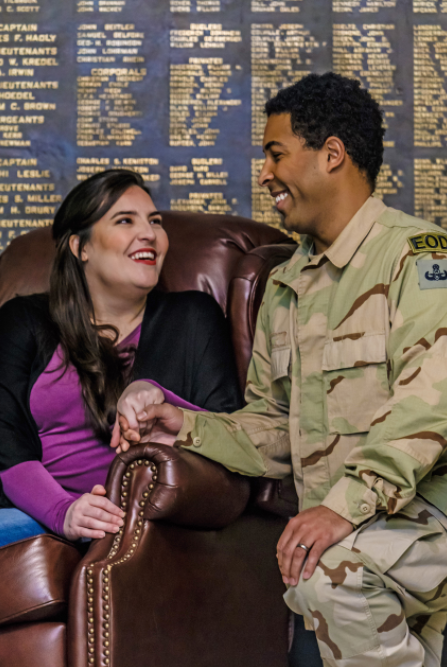 “I think this is timeless,” Taylor enthused. “There aren’t a lot of operas, plays, musical theater or movies, anything, that deals with the struggle of a post-war affliction…A lot of veterans are left to try to pick up the pieces and there are programs… sometimes, some veterans are left to figure it out themselves so I think a piece like this, where it shows this guy’s journey, I think it will resonate with veterans.”

“I always just hope for empathy,” Castner said of his thoughts for the audience. “[If] they walk away and say they’ve felt like they’ve learned something or feel something different, and this other experience of something that’s happening in my country or my community… If that leads people to want to take some sort of action, politically… You start with an appreciation for something outside your own experience.”

The Long Walk will be performed on January 20th, 23rd, 26th, and 28th at the Pittsburgh CAPA School Theater downtown with ticket prices starting at $50. To buy tickets or to learn more, please visit the Pittsburgh Opera website at https://www.pittsburghopera.org/current-media-releases/pittsburgh-opera-presents-the-long-walk.

Photos courtesy of David Bachman and the Pittsburgh Opera.