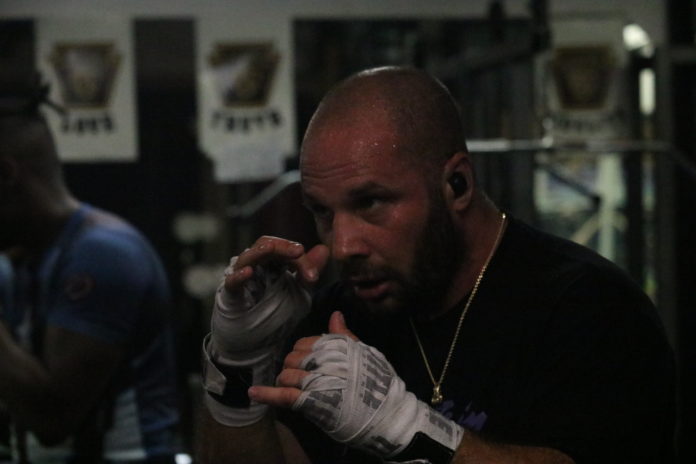 Since making his professional debut on August 18th, 2018, Michael “The Pittsburgh Bull” Manna, 36, of the Northside has donated his earnings from his five career professional fights.

“I will fight there any trials and tribulations that come my way,” said Manna. “That’s why I fight the way I fight and always pull through for everyone who finds strength and what I do.”

On the same date in 2019, he announced that his next fight at the Printscape Arena in Canonsburg on November 2nd would be his last.

The 365 days from his first fight to announcing his last fight began just under another 368 days before that. A run through North Park on August 15th, 2017, is where he made a covenant with God to donate his earnings from each fight to a charity.

The statistics of the run is still on his phone, reminding him of why he must continue to keep going.

“I think about it all the time,” said Manna. “When I’m dying and struggling and looking for air, I would say hey God; you remember how you came through and give me some air for that [run]? Can you give me some more to get through this run?”

A charity and cause he has frequented through his run is Children’s Hospital with a focus on cancer patients. His last fight in March, he gave his proceeds to Marty McElroy, a man diagnosed with a cancerous brain tumor this past January.

Manna met McElroy through his job in insurance with Aflac. McElroy didn’t end up using his services, but he did what he could when he heard the news.

Through the money from his most recent fight, t-shirt sales, and his donations, he was one of the many people who supported McElroy’s GoFundMe that raised $12,661.

McElroy passed away in April due to complications from surgery.

One of the moments that meant the most to him this year as a professional fighter was holding an open training session in the Strip District. In June, Manna, his manager Michael McSorley and two fellow fighters Oleg Dovhun and Lyubomyr Pinchuk held a training session outside of La Prima Espresso.

“People were handing cash to me in my hand with the faith and trust to me that it’s going to charity,” said Manna. “It’s more significant to me than anybody can imagine, because of my past and history. It’s truly humbling.”

Manna won his first three professional fights by knockout. His first victory on that August night was an instant classic, every shot that he landed reverberated the Priory Grand Hall, a place he fought numerous times as an amateur.

McSorley has known Manna for eight years, back to his days as an amateur. When Manna approached him about beginning his pro career at the age of 35, he knew that his career would be brief.

“Time waits for nobody in boxing,” said McSorley. “But he stays busy, he’s been on all of our cards and fought in West Virginia as well.”

His last two fights have not gone so well, losing both matches by knockout. For his final bout, he wanted to re-acquire the grittiness from his days as an amateur. He usually trains at Jack’s Boxing Gym in the North Hills, but Manna and his son Mateo train at Third Avenue Gym Downtown for now.

“Not to be cliché, but if you look at Rocky 3, you’ll see what I mean,” said Manna. “I need to be around dirt and grit like where I came up and the pain that I went through sparring as an amateur.”

In his final fight, he will battle Butler, PA’s Ryan Covert (2-2) for the Steel City Heavyweight Championship. The belt was initially for the Cruiserweight Division; a division considered a more natural fit for him. Both men had opponents drop themselves from the card.

“I thought that the fight having a little bling would get people talking,” said McSorley. “It would give the fighters something to talk about for years to come with their families.”

The two fighters agreed to battle in what is the final fights of their careers. Both have similar starts in boxing, Covert, 41, began his career on his 30th birthday in 2008.

“I know there are better heavyweights in Pittsburgh than me,” said Covert. “It’s surreal, and I’m the son of a steelworker, so it’s a dream come true.”

He will be donating his earnings to Dan Smith’s Fear the Beard Spaghetti Dinner. Smith, a farmer, donated one of his prize pigs to Covert and was diagnosed with Leukemia a few weeks after giving him the pig.

“The fact that he donated me the pig, felt like a good idea to help out,” said Covert. “I don’t need the money; I want the Steel City Heavyweight Championship.”

Manna still wants to be a part of boxing after this fight. He plans on opening a boxing gym on the Northside with George “Geo” Heinlein, his trainer. He also wants to help coach, manage, and promote fighters.

When the winner is announced, and his professional career is officially over, Manna wants people to remember you don’t always have to do things for yourself.