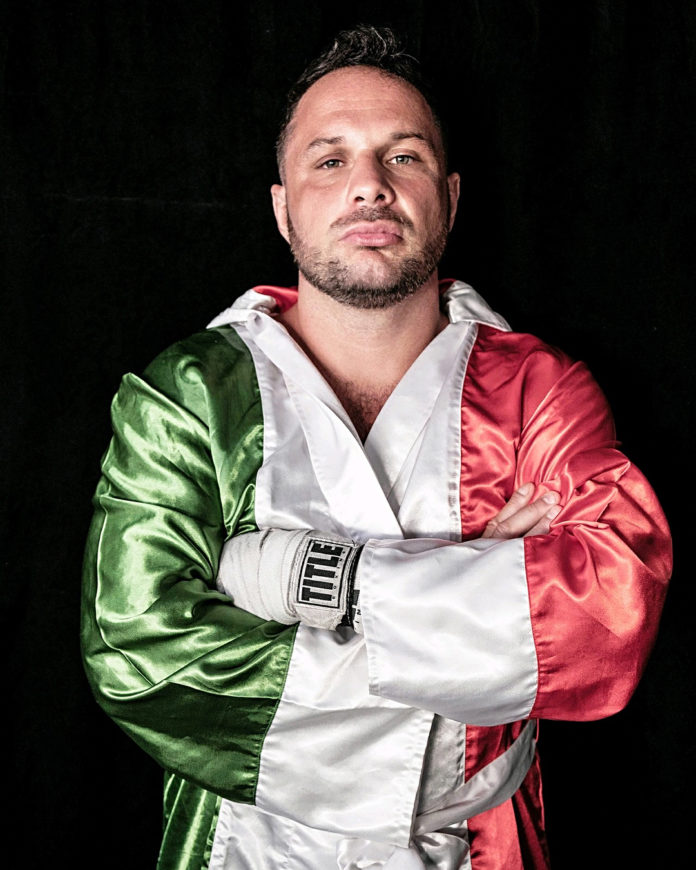 Last year, during an August 15th run through North Park, Michael “The Bull” Manna, then 34 years old, was at a crossroads at his boxing career. He wants to go professional with his career, but he was searching for motivation.

“I was dying, I hadn’t trained in a while”, said Manna. “I asked God what I should do, and he made everything clear”.

On that run, he decided to donate the earnings from his first three professional fights to charity. On August 18th, a year and three days to his covenant with God, he will make his professional debut inside Pittsburgh’s Grand Hall at the Priory. The fight purse will go to the Children’s Hospital Cancer Center.

“I have a family history of cancer, my cousin, Cadence, was diagnosed with Leukemia at age four”, said Manna. “But it was a spur of the moment during that run”.

He learned how to box as a child, but he didn’t compete as an amateur boxer until 2011 at the age of 28. His change of heart came after the birth of his daughter, Gabriella, in 2007. He described himself as a knucklehead, he was involved with underground casinos and was arrested a few times.

“I needed to change,” said Manna. “I got more personal with God, asking him what to do with myself”?

His career wasn’t a huge success, he won 19 of his 50 amateur fights, most of them by knockout. He credits “The Pittsburgh Kid” Paul Spadafora’s pro-style training for his success.

“He’d preach timing and rhythm in the first two rounds, by the third round I got you,” said Manna. “I would either lose by points or win by knockout”. Spadafora will be in his corner Saturday night.

George “Geo” Heinlein is his head trainer for his fight and has been his trainer for four of the fights he’s won by knockout. He believes this fight is on his journey of giving back to people who have supported him.

“It’s almost a thank you to where he is now,” said Heinlein. “He’s a goodhearted human being and feels the best way to give back is to fight”.

Manna currently lives in Shaler but has been a Northside resident for most of his life. He will be fighting at The Priory for the fifth time in his career. He fought there previously for the Pittsburgh Donnybrook against Team Ireland in 2014 and 2015, Team Italy in 2017 and a last-minute fight in May 2018, his final amateur fight.

Michael McSorley, who is promoting the fights at the Priory, has trained him, and promoted that last fight, explained how he “tore the house down” with his punching power.

Ted Mrkonja, the Head Coach at Gold Medal Boxing, has a few fights with Manna in his corner but had one of his fighters, Hunter Matthews go against him at a country club in Bellevue.

“Hunter had two 8-counts against him in the first two rounds,” said Mrkonja. I told Hunter to go after him in the third round, Mike caught him at a bad angle, and got a knockout win.”

Manna has gotten a lot of support from not only the Pittsburgh Boxing community and people around the city when he does his runs for training. He runs from the Northside to Point State Park, while he pulls a friend riding a bike for resistance, that has the sign “Pittsburgh Bull Knocks Out Cancer”.

“I had earphones on focused on the run, but my friends told me people were taking photos, videos and yelling ‘Go, Rocky!”, said Manna. “I got this training idea from Rocky II, where Rocky pulls Mickey on a bike.

So far, he’s sold 2000 dollars of tickets, he’s getting 40 percent of the ticket sales. He’s not worried about money, he sells Insurance as a full-time job. For him, it’s about putting a smile on a kid’s face.

One friend of his bought a ticket to see him fight and will donate 200 dollars to Children’s Hospital. People said they couldn’t go but bought tickets to support the cause and offer a free seat to someone who couldn’t afford them.

“If you put enough good out there, and people start seeing that, it will become contagious and people will start doing that more”, said Manna. “Put something out there and it will be magnified”.

“It’s going to be a rowdy atmosphere”, said Heinlein. “Everybody’s expecting a knockout, and that’s what’s going to happen”.

Manna has already decided the next charity donation for his next fight. He wants to donate for abused children, specifically the Survivors Network of Those Abused by Priests (SNAP). As someone who was abused as a child, he has strong words to those who are involved in such heinous acts.

“I believe if you abuse and or molest kids, you’re a scumbag”, said Manna. “I don’t like that, and this is going to be personal for me”.

Michael Manna has one wish, that his choices inspire others to go out there and do something about the things they want in life.

“People don’t have to donate money or jump into the ring and get smacked in the face like I do”, said Manna. “You can always do a good thing your own way.

For tickets for the fights, call 412-728-3409 or log onto https://integrityproboxing.ticketleap.com/professional-boxing–the-priory/

To donate to the Children’s Hospital log onto https://www.givetochildrens.org/donate