When I walked into BOOM Concepts to talk to co-founders Thomas Agnew and DS Kinsel, it was the night before the opening of the current exhibition, “A Piece of Boom.” I proceeded over a floor that was strewn with artwork, and into the office of Thomas. Brilliant images from JENESIS covered the room, a magazine of which he is the EIC. Thomas shot me a magnificent smile, and we got straight to talking.

He told me a bit about his personal work as a graphic designer, and what he’s been doing over the past 10 years with JENESIS. When we got to the origin story of BOOM, Thomas said that the idea generate

d due to a basic need that both he and DS were experiencing at that time, a space to work. They met with Justin Laing from Heinz, who connected them to the Bloomfield Garfield Corporation. Within a few months, Thomas and DS found themselves with a new spot, after working out all of the logistics of leasing.

Thomas went on to explain to me that the concept for the co-working community arts space BOOM, as many of us fondly know it now, took shape once he and DS began producing work in the space. After about two or three more months, they decided to take part in an Unblurred event, and that is when the structure began to take shape. They decided to do a series of micro-residencies. The first four artists to complete those were women: Bekezela Mguni, Njaimeh Njie, Erika Turner, and Roopa S. Singh. Thomas fondly recalled working with Roopa. “She was our first resident artist. She’s also a lawyer. When we handed her our first shot at a contract, we quickly realized we needed to tie our shoes. She was a great partner, and really helped us put things together,” said DS, who had joined us mid-conversation. 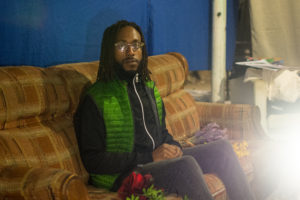 I asked the two of them about how their roster continued to develop, and what that structure looks like today. DS explained by saying, “The core leadership team is Thomas and myself, Anqwenique Wingfield, and Julie Mallis.” He went on to tell me that the team stands out “because these people are really intelligent and special. And because this organization was started by two black men.”

The three of us went on to talk about the important role that BOOM is playing in the community, providing artists with opportunities and resources. They both agreed that they try to give artists what they themselves wish someone would’ve offered them; and they’re working hard to promote a peer-to-peer environment, encouraging the development of the next generation of artists.

As we continued through the space, we ended up in DS’s studio, which is in the basement. While taking a look at the prolific series of paintings he’s currently working on, DS said to me, “We’ve been told and we believe that what we’re doing is historic. Both nationally and locally. I believe that BOOM is an extension of my work, like that of Thiester Gates. We focus on marginalized populations because that’s who we align with…people that are black, brown, female, queer…”

I have to say that this team is doing way more than I can write about in one article.   It’s immensely impressive. They’ve secured grant funding to take their entire team to Detroit for professional development; they have completed more than 10 public art projects; they’ve turned what started out as a turbulent relationship with the Warhol Museum into a dynamic partnership-having a project between BOOM and the Warhol shared at Art Basil and around Europe; they recently opened a shared studio space in Allentown; just this week they announced that they’re a recipient of Advancing Black Arts Funding, for a performance piece that BOOM has been working on; and most importantly, as DS put it, they’re “getting artists paid.”

Because there are way too many incredible things to say about BOOM Concepts than I can write, I would encourage people to go and learn more in person. These events are just the place to begin: