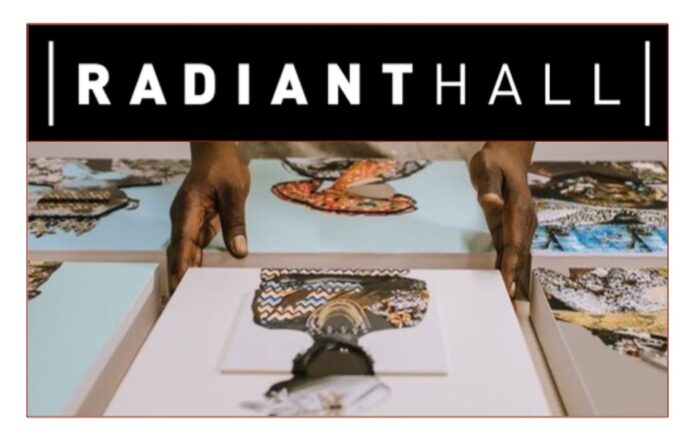 A CENTURY AGO, the three-story blue brick building at 734 Thompson Avenue in McKees Rocks housed one of Pittsburgh’s numerous German cultural associations.

The new facility features 18 artist studios with more room to grow in the future, according to Radiant Hall managing director Shanae Phillips.

“The days ahead look like they will continue to be challenging for artists,” she predicts. “We want to be a source of stability for artists experiencing a lot of uncertainty right now.”

For Radiant Hall executive director Ryan Lammie, “stability” was a key factor in his decision to open the first Radiant Hall in Lawrenceville in 2012.

Lammie had just returned to Pittsburgh after earning a BFA in painting from Pratt Institute in Brooklyn; like many young artists, he was frustrated in securing modestly-priced studio space in a town whose steadily rising Most Livable City Ranking had the unintended effect of excluding many residents, business owners and aspiring creatives from more affordable neighborhoods.

During his Big Apple sojourn, Lammie had organized the Pratt Harlem Project, a pop-up exhibit and community space in a 9,000-square foot commercial building. Permanentizing the pop-up concept in Pittsburgh was an idea whose time had come, and Radiant Hall’s three sites (Lawrenceville, Homewood, McKees Rocks) now provide close to 70 artists with not just studio space but an array of career development services ranging from aid in applying for grants and creating a website and c.v. to financial planning, legal and business advice, photo documentation and more.

“It all comes down to the same thing for me: community,” says painter Crystal Latimer, studio director at Radiant Hall Homewood. “Artists need to focus beyond the studio itself; we need to be constantly evolving our work and our businesses. Being among creatives at different stages of their careers brings inspiration and drive to further our practice. Radiant Hall’s community is where I find true value.”

For centuries, graphic and craft artists have congregated in communal work areas, often as part of trade guilds or urban collectives. By the late 1800s, the artist studio had evolved into a blend of commercial workroom and contemplative study that offered reflective space and emotional sanctuary for the artist.

Starting in the 1970s, urban redevelopment programs in U.S. cities began including dedicated artist live/work spaces to enhance the renewal zone’s “quality of life”. St. Paul, Minnesota-based Artspace is one of the most successful nonprofits in the field, having created nearly 2,000 artist live/work units and millions of square feet of arts-related community and commercial space in two dozen states. Hundreds of similar initiatives have popped up across the country from Bradenton, Florida’s Village of the Arts and Seattle’s Tashiro Kaplan Lofts to the scattered art “colonies” throughout New York’s Hudson Valley and ongoing efforts by the Actors Fund Housing Development Corporation geared to theatre professionals.

Does being a member of an artist work space make a difference to an artist’s art?

Painter Zoë Welsh has found Radiant Hall’s communality and congeniality highly conducive to her art. “Being in a space like Radiant Hall places me within a network of artists at all stages of their careers. As an emerging artist myself, it is the place I turn to first for feedback on a project long before it lands into the public sphere. While I don’t think being at Radiant Hall necessarily influences the kind of work that I make, I think it serves as the main vehicle for getting it out into the world.”

Along with public open studio nights, Radiant Hall has a tradition of group reviews among members and inviting visiting outside artists for one-on-one critiques. “We learn from and inspire each other so much,” says Heather Heitzenrater, occupant of a painting studio at Radiant Hall Homewood. “When we see the success of others in our community, it makes me want to work harder and reach my goals as well. I don’t know of any other studio that does so much programming for the artists. It makes me feel really cared for.”

Each Radiant Hall location has a studio director who is a practicing artist and often a de facto mentor. For mixed-media artist and art educator Evan Rumble, the proximity to established artists is “a total learning experience” he feels has been a major contribution to his professional development. “How amazing can it be to lean into the studio next to you and bend the ear of a professional who’s been in the business for several years? That’s like free tuition.”

The organization’s biggest challenge now is regaining the ability to interact with the public, says Shanae Philips. “We normally have very well-attended open studio tours twice a year, and we couldn’t do that in 2020 except virtually. We’ve adjusted by trying to find sales opportunities like outdoor pop-up markets to get their art in front of potential buyers.”

While it’s still unclear when the visual art world might return to a fully pre-pandemic mode of interaction between artists and their public, Radiant Hall and other local artist enclaves will continue to flourish as safe islands in very turbulent seas.

And first and foremost be, as Zoë Welsh affirms, “an incubator of savvy creatives, problem solvers and hard workers making beautiful things.”