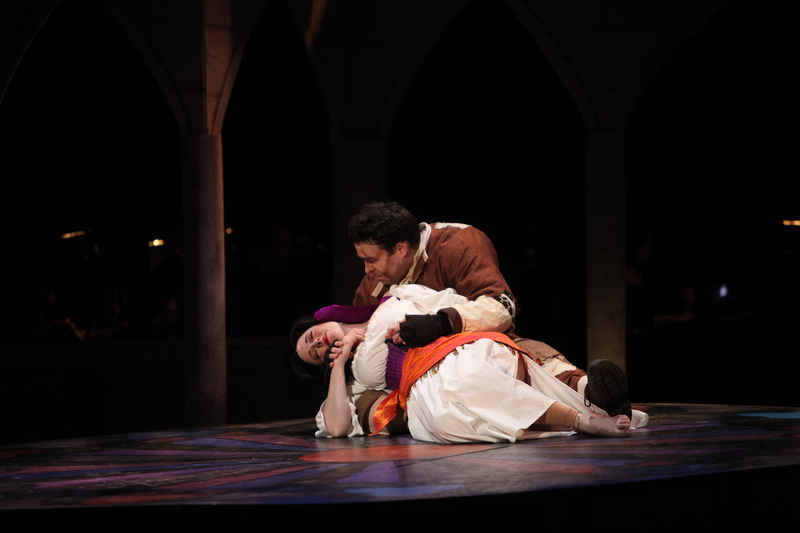 The Hunchback follows Quasimodo (Quinn Patrick Shannon), a deformed, unwanted, and ostracized boy who was begrudgingly taken in by his uncle Frollo (Allan Snyder) after his father, Jehan Frollo (Alex Noble), a resident bad ass who was expelled from the church, died from the plague. Quasimodo is raised by Frollo, and kept in the cathedral’s clock tower, hidden from the world, and forced to become the resident bell-ringer, rendering him almost deaf. As he begins to contemplate the outside world, with the help of his gargoyle companions, he decides to leave the tower, only to find a cruel reality of judgement and persecution.

All except one, Esmeralda (Emily Lynne Miller), a gypsy who showed Quasimodo kindness, mercy, and ultimately friendship. Understanding the nature of an outcast, as gypsies were persecuted by the church fervently, the two formed a transcending bond that could not be broken, even at the hand of a manic megalomaniac like Frollo. The dramatic dance between good, evil, and the fragility of the male super ego are all highlighted in proper form. 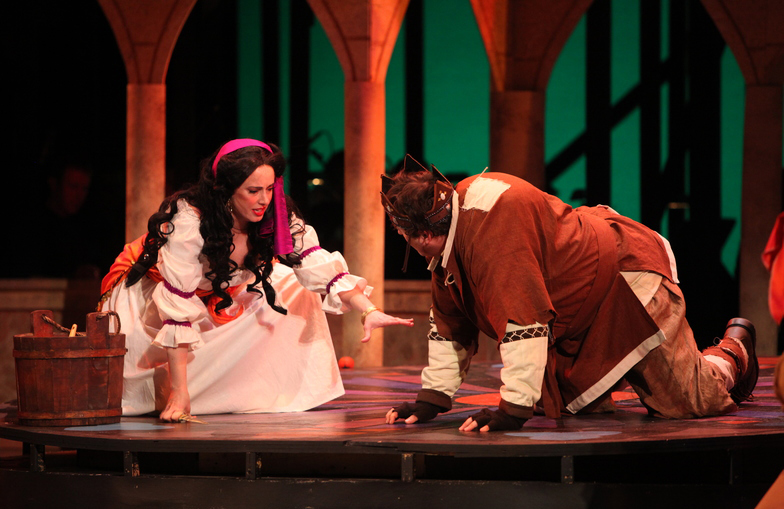 Quinn Patrick Shannon shined as Quasimodo. His resonating and powerful vocal architecture perfectly displayed the essence of Quasimodo’s frustrations and dreams. As we see him transform into the most human of all, Shannon gripped the audience with song and line, proving a well-balanced performance that will soon not be forgotten.

“Obviously there’s a great deal of responsibility when undertaking such an iconic role. I’ve been trying to take more of an organic approach in order to avoid the pressure to be stereotypically disabled. But it’s a great honor to bring Quasi to life! I think the character along with the show’s message is one of acceptance and love. Bigotry and hatred have been in the news a lot lately. We need to be reminded that we are all equal no matter our differences,” said Shannon. 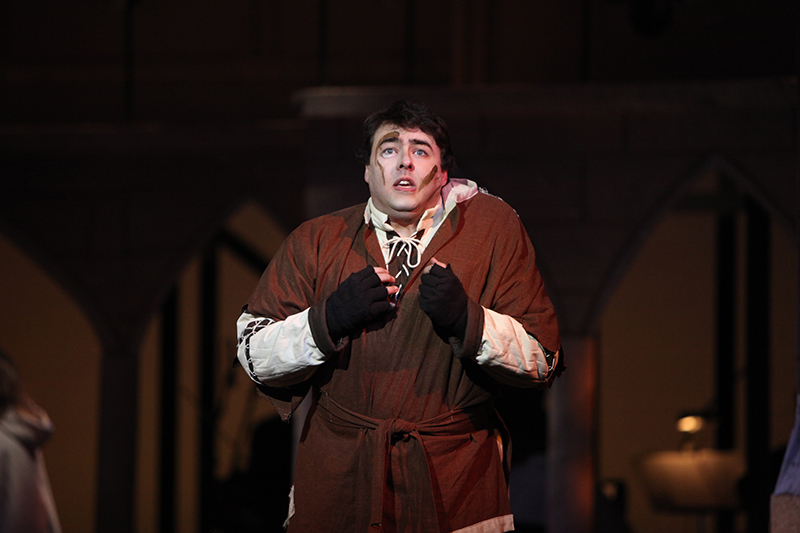 Emily Lynne Miller gave a delightfully intrinsic performance as the scrappy and sensitive Esmeralda. Vibrant and veracious, Miller artfully depicted Esmeralda’s strength as she navigated the tornado of male emotions. Millers voice was angelic, and after two years on the London stage, her lower register was noticeably more powerful.

Allan Snyder convinced the audience he was the devil in white as Frollo. Plagued with judgement, insecurity, and rash actions of villainy, Snyder nailed the profoundly flawed nature of Frollo with poignantly timed execution and riddling vocals. At the end of the show, when Snyder came out for ovations, the crowd cheered, but hesitantly, because they kind of hated him…And that’s how good he was. Well done. 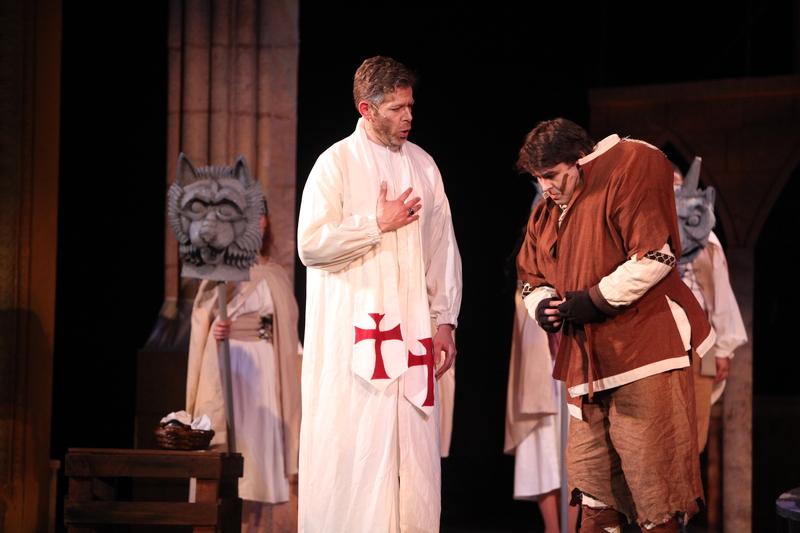 Last but not least, Javier Manente as Phoebus blew the audience away with his soulfully breathy vocals. As he belted out “Esmeralda” in act I, the crowd was bursting at the seams to cheer, and cheer they did. Manente’s voice is classically epic. 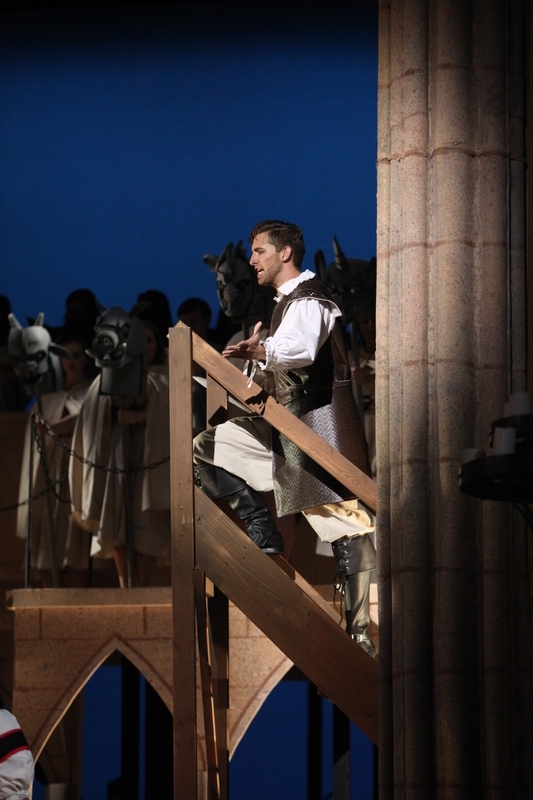 Honorable mention to the ensemble cast with a whimsically operatic performance. They shuddered the stage with their intro and outro numbers. Phenomenal control with an ethereal tone that resonated throughout the show.

Overall , The Hunchback of Notre Dame is a symbiotic and symbolic performance with well crafted direction, vision, and execution, courtesy of directors Ken Gargaro and Colleen Doyno.  Entertaining, gripping, and worthy of the Byham stage. The Hunchback of Notre Dame runs through February 5th. For more information, visit Pittsburgh Musical Theater. 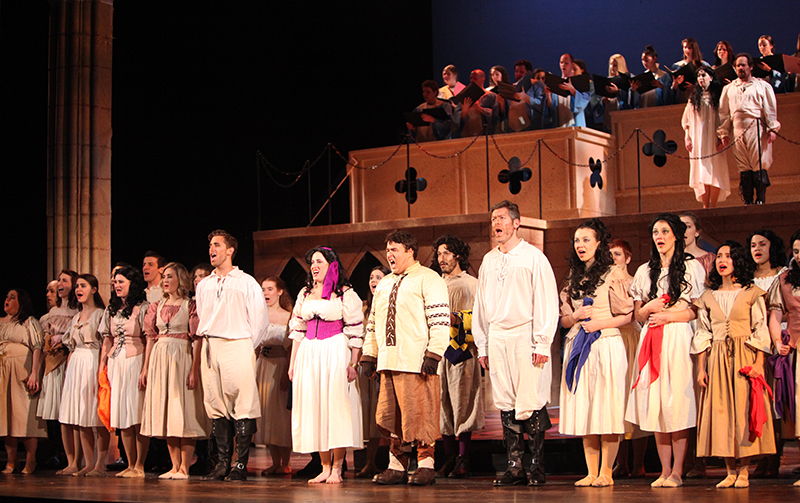