THERE COMES a point in the daily sensory-overload immersion tank of nonstop social media chatter-adblast incursion-breaking news bulletins where you just have to come up for air and breathe in some Art.

That’s the bracing psychological effect of to the republic for which it stands, the current Associated Artists of Pittsburgh exhibit on view through November 11, 2020, at 100 43rd Street, Unit 107, in Lawrenceville’s Ice House Studio complex.

to the republic for which it stands features work by 26 Pittsburgh-area artists that asks you to see our current social and political disruption with a fresh, clear, calm gaze.

And then dive back in the tank and swim with a renewed aspiration for social change.

“In these exceptionally dark times, we look to artists to impart the kind of insight we need to not only shine a light on what’s going on but to give us the language we need to interpret that experience,” says Norman. “Making art that resonates protest is just another way of being human. What a pleasure it is to see such a varied dance of protesting humanity in a show like this.”

Cuellar-Shaffer, a native of Colombia, regularly addresess social change in her own art. “We are living in unprecedented times,” she says. “These artists are doing important work to document the complexities of this crucial moment in history.”

The show title references the well-known Pledge of Allegiance, first introduced in 1892 by Christian Socialist minister Francis Bellamy in a popular children’s magazine, The Youth’s Companion.

Over the years, The Pledge has become America’s de facto national credo, stating our collective commitment to maintaining a social order that provides “liberty and justice for all”.

When that commitment appears to fray, artists waste little time in sounding the alarm. 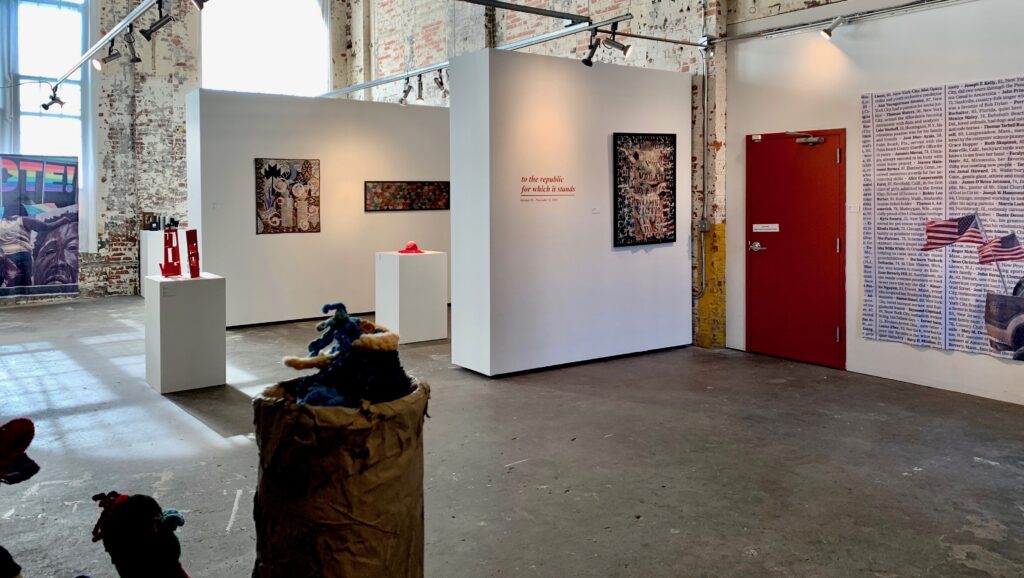 IF ANYONE’S LOOKING to apply a genre label, to the republic for which it stands would fall into the category of Wake-up Art — Art intended to rouse us from a sleepy acceptance of the world as we see it on a conscious level.

Wake-up Art isn’t usually gentle in presentation … it can often seem like a rusted, broken mirror with unnerving shadows and tantalizing glimmers of light. It demands we dig deeper into our subconscious and seek the truth about our social relations with each other. It cuts to the core of our trust in myths about cultural institutions we’ve long taken for granted.

Wake-up Art is an intentional provocation that points toward possible solutions by reminding us (as graphically as possible) of the serious problems at hand.

“We’re an organization with 550 members encompassing a wide range of styles and viewpoints,” says executive director Gent. “With to the republic for which it stands, our artists went out of their way to crystalize their thoughts and feelings into their work. It’s an exceptional assembly of expression.”

** EXHIBIT INFO for to the republic for which it stands is here; viewing appointments can be scheduled here.

Artists appearing in to the republic for which it stands: 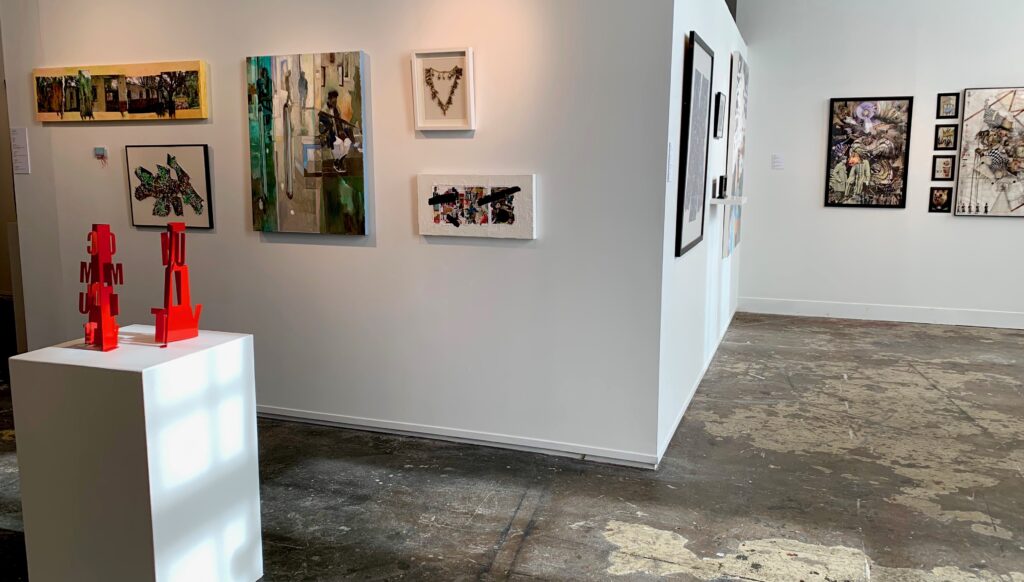