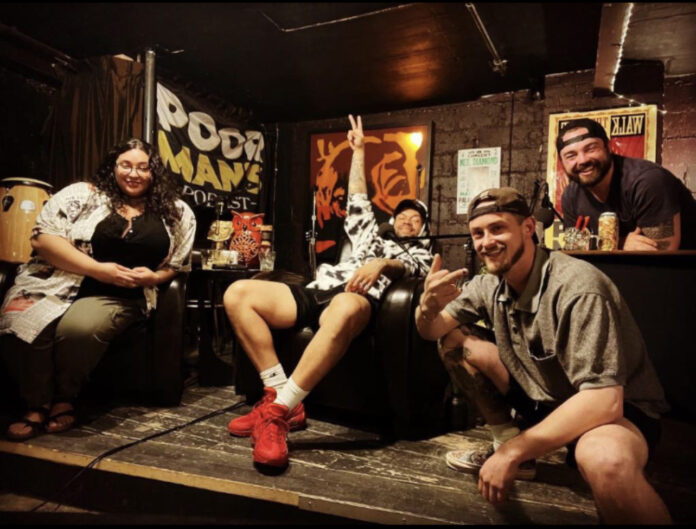 In just over a year Poor Man’s Podcast has quickly established itself as Pittsburgh’s Premier Comedy Podcast. Based in Bellevue, each show shares a comical take on local topics and pop culture by host and founder, Chris Hopper. Joined by co-hosts, CheyLeigh Thomas and Producer Cheech, the crew has gained much momentum recently in the local scene by winning Pittsburgh Magazine’s Best of the ‘Burg for best local podcast in 2022. 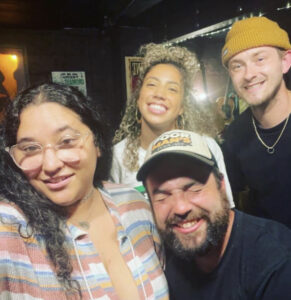 Each podcast is divided in two parts, beginning with a local beer review and the crew discussing UNATION’s Stuff to Do in Pittsburgh’s weekend guide. In the second half, the crew interviews a local guest to discuss their passions, share intriguing stories, and crack jokes. According to Hopper, “I describe the show as kind of mash up of a traditional morning radio show in the first half and a late-night show in the second half. We discuss weekly Pittsburgh events, review craft beers, and interview local people of interest.”

Poor Man’s Podcast is at a loss of words to have Pittsburgh icon Rick Sebak as their guest this week. For decades, Sebak has served as the primary voice for Pittsburgh history. His work with WQED and PBS, along with his distinctive narration style, helped solidify him as Pittsburgh royalty. With over 30 documentaries, Sebak brings a knowledge of Pittsburgh to tell compelling stories that not only entertain, but educate. Whether its Kennywood memories or a history lesson about bridges, Sebak never fails to show the best of his hometown. His love for Pittsburgh and wacky documentaries has earned him numerous local awards and recognitions. Throughout his career, Sebak was nominated for 10 regional Emmy Awards and an honorary doctorate from Seton Hill University. Sebak’s knowledge covers a wide range of local topics including Kennywood, hot dogs, and cemeteries, just to name a few. His wide range of expertize makes him the perfect guest. “We have a lot of comedians on but we’ve also had singers, photographers, professional athletes and even ghost hunters,” said Hopper when asked about his guests. The show’s Instagram page also stated, “we literally cannot describe how excited they are to have Pittsburgh LEGEND Rick Sebak as our guest this week.”

Along with Sebak, Local Pittsburgh writer and brother of Chris Hopper, Jeremy Hopper will also appear on Poor Man’s Podcast this week. Before joining Local as a free-lance writer, Jeremy served as a founding member of the podcast years prior. Originally, Poor Man’s Podcast began when the Hopper brothers and their cousin, Joe “egghead” O’Donnell, were still in college and high school before being relaunched with a more serious approach in 2021. “I’m very happy with the growth my brother has taken with the podcast in recent years,” noted Jeremy Hopper. “I remember recording with microphones from Guitar Hero and Rock Band on a broken air hockey that was stored in our parent’s attic. I’ve always considered the show to be, ‘serious conversation about non-serious topics,’ we used to live react to the top 3 trending yahoo searches and share our random opinions on everything under the sun.” Poor Man’s Podcast has drastically grown after being improved and publicized in the aftermath of the COVID-19 pandemic. The Hopper brothers and their cousin decided that the lockdown would be an opportunity to relaunch the podcast with a more ambitious approach. Over the course of a year, Chris Hopper developed the podcast into a well-structured show with local guests and consistent co-hosts. “I’m excited to share stories form Poor Man’s past, while hearing about the future of the podcast,” said Jeremy Hopper. “Rick Sebak is the pinnacle of Pittsburgh media and is the perfect guest for the show. Once Sebak is on board, you know it is legit.”

Poor Man’s Podcast releases new content every Monday and can be live streamed at 6:30 on YouTube and Facebook. The show is based in Bellevue and recorded at 565 Live Speakeasy and Stage. “I really love doing the podcast and meeting new people each week. It’s awesome to be around these creative and usually really people. I can genuinely say I’ve enjoyed and learned something from each guest,” said Chris Hopper when asked about the podcast. Poor Man’s Podcast is available on every major platform including itunes, YouTube, and Spotify. Follow Poor Man’s Podcast on social media: