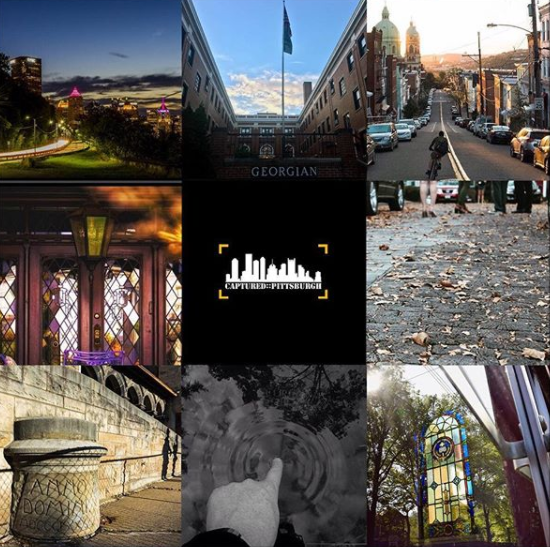 If you’ve been to Shadyside, you might have walked past the open air gallery on Walnut Street, across from the Apple Store. Accentuated by hanging lights, welcoming benches, and a creative yet functional ashtray, a series of photographs pop out from the space, inviting you to explore or simply stay and enjoy the space for a while.

This is Captured::Pittsburgh. But their unique gallery is only one small part of the non-profit organization. Trio Jason Fait, Jason Kodat and Adam Thomas created Captured with a unique vision in mind to redefine the way that art is shared and communities built.

The eclectic group of friends come from different backgrounds – professional photography, healthcare and marketing. Their diverse tastes and perspectives keep things “fresh,” and each member serves as the other’s “checks and balances” to make sure Captured – which receives over 2,000 submissions on their Facebook and Instagram pages – runs as smoothly and efficiently as possible.

“”We met over on the East End at a tea shop and I pitched this idea to Adam,” Fait told us. “I wanted to do something that helped promote artists like a gallery space, but it had to be different. I came up with this idea of this group Captured::Pittsburgh”

Thomas continued the story, “They [other art groups in the city] all walked around the neighborhood in a circle, and drank beer. They all did the same thing. It was unproductive and, out of this group, I’m the only one who does this for a living… If I was going to do this, it had to be worthwhile.” 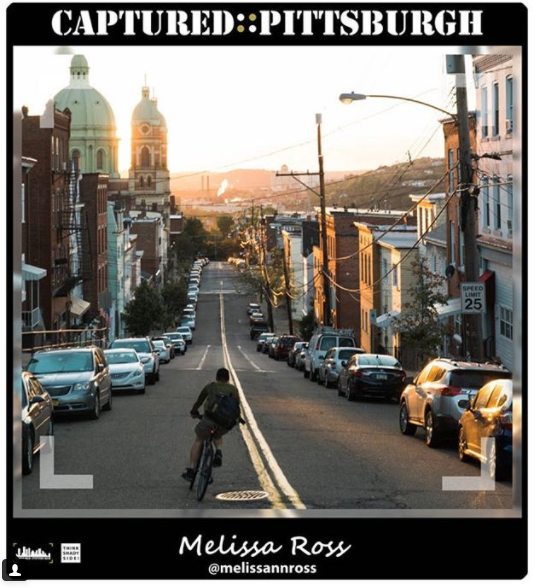 With this in mind, the three developed Captured::Pittsburgh as more than just another collective for a small group of artists to share and develop. Instead, they focused on support, promotion and education.

First, they wanted to get the community involved by selecting a space in need. When a friend told them about the alley in Shadyside, it was run down and covered in overgrown shrubbery. Partnering with the University of Pittsburgh for their “Make a Difference” day, they were able to – with the help of the college students – renovate the space into a clean spot featuring art on recyclable metal, where passerby now sit and stop to explore the art, sit with friends or just enjoy their lunch break.

As they do, they can enjoy eight works by eight different local artists. This 365 days, 24/7 gallery is completely free to the public, and – similarly – the submission process itself ensured equity.

“We didn’t want a gallery where you had to ‘pay to play’…Everyone can participate. There are no restrictions,” Fait said. “Anyone that has a phone or a camera, that has a FB or Instagram account can participate in this project.”

After the images – accepted from anyone in Pittsburgh and the greater Pittsburgh area – are submitted using their hashtag to their social media platforms, the trio curate the exhibit, Works selected are from a wide range of people at all different ages and skill levels.

“We want the community’s photos. So we have a nice mix of people that have photography businesses vs people who work at the local coffee shop, someone who worked at the Port Authority as a mechanic… those are the people we want. To us, it’s a community space and we want to make sure everybody feels like you can participate and everyone has the chance to get selected.”

From a young twelve year old student who took a picture of a vintage truck to a professional photographer who was able to open her own gallery in Oakmont, at Captured::Pittsburgh the artists get the VIP treatment. ““We want you to feel like you’re part of the community, that you’re special,” Fait said. They have their works not only featured for thirty days in the gallery, but also get their own interview on the Captured::Pittsburgh website, and also get to attend the annual gala hosted by the non-profit to celebrate their artists and the community.

While submissions for all photos (and as many as you want to submit) are open at all times, each month often has a theme (i.e., photos featuring the color pink for breast cancer awareness in October). Many of these themes are motivated by meaningful causes, and the non-profit has partnered with other organizations such as the Humane Animal Rescue League and Preservation Pittsburgh to host unique events.

In one memorable event with the Rescue League, Captured did a photoshoot of homeless dogs, who were then quickly adopted after the photos were spread throughout social media. Even the ones that had been waiting on their “forever families” the longest were able to find a home through this positive exposure.

Captured::Pittsburgh’s unique vision also extends into the realm of education. They have partnered with local schools, including Montessori and North Allegheny, to host classes for the children, including giving them neighborhood tours, where they are able to take their own photos and receive critical feedback. Special workshops, including one in which they rented out a club to have a band play and give artists a chance to practice concert photography, are also available for the general public, as well, who want to sharpen their skills.

Not only is this life-changing for the artists, organizations, and audiences who have enjoyed the art, built their resumes, formed lasting partnerships and forged friendships throughout Pittsburgh, but it is also a game-changer for the founders, as well, who have been enjoying every minute.

“In the last 18 months,” Kodat enthused, “Captured::Pittsburgh has been responsible for so many sentences that start with the phrase ‘I can’t believe I’m…’”

2018 promises that Captured will only be bigger and better. With a pilot program out in Erie, and interest in other cities as places as far as Alaska in starting similar chapters, there are also hopes for a second gallery space here in Pittsburgh, as well. Fait, Thomas and Kodat are currently looking for other businesses to part with.

Any commercial organization who wants to promote a specific cause can reach out to them and, for a small donation, can help select the theme and artists to raise awareness about their cause of choice.

Coming up next for Captured is the theme Music in the ‘Burgh. You can submit by February 15th to be part of the March gallery, and be sure to visit the latest exhibit unveiling on February 2nd at 7pm for this month’s show Love in the ‘Burgh.

To learn more about the organization or to get in touch with the founders, you can visit their website here: http://capturedpittsburgh.org/contact-us/