“Plant a garden in which strange plants grow, and mysteries bloom.”
— Ken Kesey

Now, plants have entered into the literal musical mix.

His latest audio release (The Singing Life of Plants, SSK Records) features 45 minutes of him playing in consort with live sounds generated by plants. 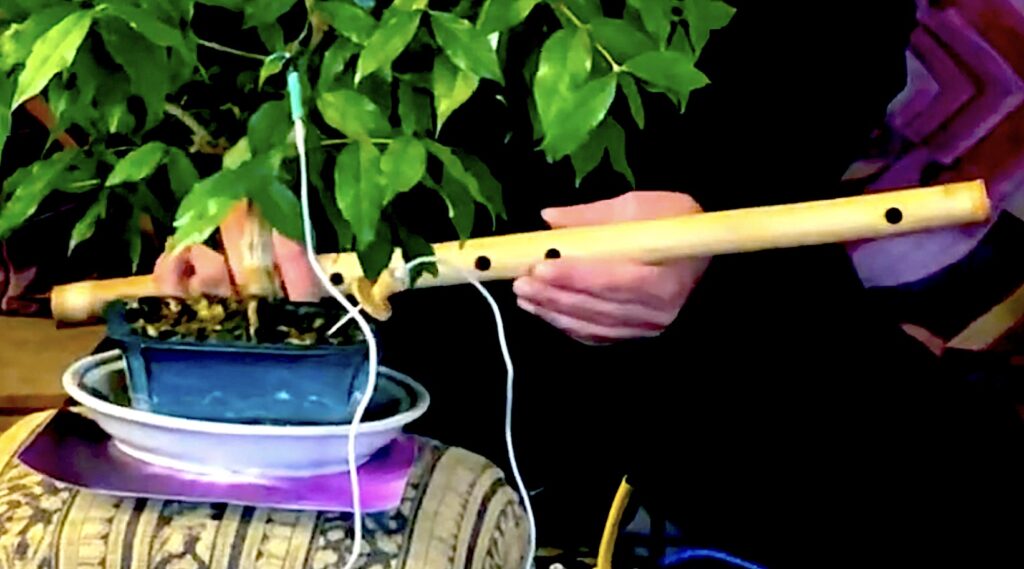 In the 1960s, scientists working in the field of bioacoustics first measured the parameters of audio frequencies expressed by plants — acoustic emissions ranging between 10–240 Hz, ultrasonic acoustic emissions within 20–300 kHz. Research suggests plants may use sound as a means for interpreting their surroundings and communicating with other plants; in addition, plants may be able to “hear” and interact with sounds such as flowing water, encroaching insects, leaf blowers and other environmental audio stimuli.

IT WASN’T until 2014 that the first device capable of translating plant sounds into the realm of musical discourse was commercially manufactured by Philadelphia-based Data Garden. The MIDI Sprout uses an simple electrode/microphone setup that brings whatever audio frequencies a plant might emit directly into a keyboard synthesizer to be electronically converted into musical sounds controllable by a human performer.

In today’s music merchandising, you’ll find The Singing Life of Plants assigned to the Ambient genre, and the sounds certainly match the strict definition of “relating to the immediate surroundings of something”. 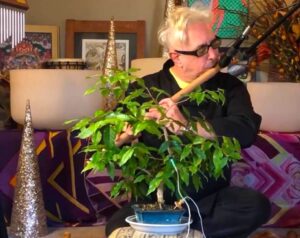 But the music Sciulli produces with his floral ensemble is far from passive or static.

As instruments and textures ebb and flow, there is always a dynamic element of an implied, intuitive journey to a new thought place you haven’t been before, or if you have, you’re seeing it differently and deciding to spend more time there.

Something in the music has compelled you to stop and smell the ficus.

LOCALpittsburgh recently had the chance to speak with Steve about his new recording.

LOCALpittsburgh: Do you remember when you first learned that plants produced sounds? 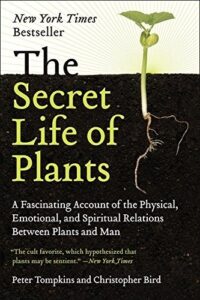 Steve Sciulli: In 1973 a book came out by Peter Tompkins and Christopher Bird called The Secret Life of Plants. This opened me to the possibility of plant consciousness. Around 2014, the work of Clive Backster pinged my long-range radar, and — serendipitously — news of a new, plant-based sound technology invention moved me forward. Intrigued, and the perennial early adopter, I was one of first to join the MIDI Sprout kickstarter campaign.

Basically, the MIDI Sprout hardware translates a plant’s electrical impulses into a signal that musical instruments understand. I received my MIDI Sprout v1.0 unit, and although I played around with it a bit, I really didn’t delve too deeply, putting it aside to work on other projects. It was something I was going to “get to later”.

In 2017, I was working on High in the Mountain for Get Hip Records, an album on which I endeavored to play every musical instrument, including ones I’d never played. The song Driftwood Maps was giving me difficulty, and over the course of a couple of days I found myself playing one passage over and over and over. After awhile I needed to take a break from recording, and it was at this point that I hooked a studio plant up to the unit.

Steve Sciulli: At first, only sporadic, random sounds were produced … but I soon noticed that a melody was forming. To my surprise, within about 20 minutes the plant was playing the passage I had been struggling with during recording. I’m thoroughly convinced the plant was saying: “Hello. I’m here, and I’m listening.”

As if that fact was not shocking enough, it then occurred to me that these plants are always listening and responding; we were just unable to hear them.

The plant remained hooked up, and throughout the day I was able to hear subtle changes in the tones it produced as the room’s environment changed. For example, when the dog walked into the room or a cloud passed over the sun creating a change in the quality of light. The more I work with these individuals, the more sentient they appear to be. We are truly collaborators. 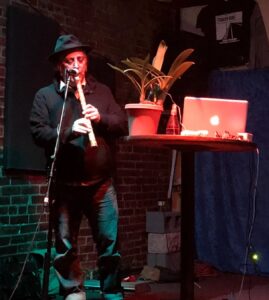 LOCALpittsburgh: Why, as a professional musician and composer of several decades standing, did you choose to develop this area of musical expression now?

Steve Sciulli: Short answer — I like the idea of being a Botanical Musician. I want to stand outside the music and let it form its own views and expression with little ego from me. This came into focus from my years of playing Japanese Shakuhachi.

One of the original concepts of the Shakuhachi is the performer be as transparent as possible. The instrument doesn’t actually have a name … it’s called Shakuhachi because of its length — 1 foot, 8 inches.

The original players were called komusō and considered themselves as priests of the Empty Nothing. They would hide their identity by wearing large wicker basket over their heads. The only part of their body that was visible was their fingers. Even within the “music” they played, the listener was encouraged to listen to the silence between the notes.

LOCALpittsburgh: “Silence between notes” … most Western ears aren’t trained to hear that.

Steve Sciulli: We are so accustomed to having a personality or ego attached to a performer. What happens when that is removed is that the sound becomes a true collaboration where the listener completes the musical experience by injecting their own reflection into the sound. Once the musician gets out of the way, this is true essence of music.

I was always looking for other ways to create this kind of alternative musical world. I have always been curious in exploring Self Generative music, a form of music that has minimal input from the performer. Who was I to judge what was happening in this sonic soundscape? I would make a few tweaks and let the music make its own decisions. Listening to the electrical discharge of plants and realizing that the music was in collaboration with the plant was very fascinating to me.

I started to explore a generative system that was GPS location-based and having the plant form musical ideas based on how it was affected by this.

LOCALpittsburgh: Is there a certain approach you take to performing with plants? Is it like an improvisation?

Steve Sciulli: It’s collaboration in the truest sense of the word. As with all collaborations, there is an element of improvisation. Not only is it musical improvisation, it’s also emotional and environmental.

One of my first live gigs with a plant, an amaryllis as I recall, was at a bar called Howlers in Bloomfield. On the drive I had to stop short, which brought the plant flying to the floor of the passenger side of the car. Most of its dirt scattered on the floor mat exposing a fair share of the root structure.

I pulled over and said to the plant, as I was scooping up hands full of soil: “Don’t you pull a Keith Richards on me! Pull yourself together man!”

We got to the club and it was our turn to perform. The plant — now known to me as Robert — let out a loud screeching sound which continued until I left the room. When Robert no longer felt my presence, he seemed to calm down and fall into a relaxing, ambient, textual expression of himself. When I re-entered the performance area, he resumed the high-pitched “scream”.

I had to figure a way to end this disaster of a performance. Finding a pair of scissors, I slowly approached him. Robert became more dissonant the closer I came. People in the audience were shouting, “No, don’t do it!”

I didn’t want to, but I ended up cutting a small section of a leaf. As soon as I did, BAM! — the plant went completely silent. Actually the whole room went silent. Slowly people began to hesitantly clap, and the set was over. Afterwards, as I was tearing down, a small group of plant fans came up to the stage area and asked for a cutting.

LOCALpittsburgh: Human-made music organizes sounds into modes, chords, meters, etc. Can you say anything about the “structure” of plant music you encounter as you set about recording?

Steve Sciulli: In preparation, I purposely set limitations on key signature, tempo, etc. when the plants and I are working together … similar to the method you would working with a human. But, as with any human ensemble, when the plants are soloing, I indulge them in the pleasure of sonic expression.

LOCALpittsburgh: How did you choose these particular plants featured on the recording?

Steve Sciulli: My partner is a master gardener. We grow our plants in a heated greenhouse and tend a wide variety, from tropicals to long-lived zombie annuals. Some are more vocal than others, but it’s more about how they “feel” when you hook them up. Each individual has a choice. I have a small rock that also sings. Out of hundreds of stones we tried, this is the only one that deigned to perform.

LOCALpittsburgh: How do these plant collaborations fit into your overall arc of music composition and performance over the years?

Steve Sciulli: Music to me has always been viewed as a sonic neighborhood where each style is represented as an address or house within that neighborhood. At the moment, I’m visiting The Singing Life of Plants house. I’m already driving around looking for the next place to land. Of late, I’ve been developing a form of ambient Americana music where the edges are blurred but the instrumentation as instinctively familiar. Throughout all of my musical missions, I attempt to maintain an initiate’s mindset, a place where the instrument is a still, borderless and unlimited expression of itself.

LOCALpittsburgh: As you’re actually performing with the sounds produced by the plants, what is your emotional response?

Steve Sciulli: It’s an observation of amazement. Most of the time the plants seem to predict my next move and meet me there. Other times it produces a real time harmony. Just like any musician the more they and we play, the better the interaction.

LOCALpittsburgh: What do you think the sounds made by plants can teach us?

Steve Sciulli: You can only grasp change by the rate in which you experience it. 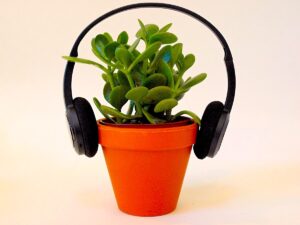