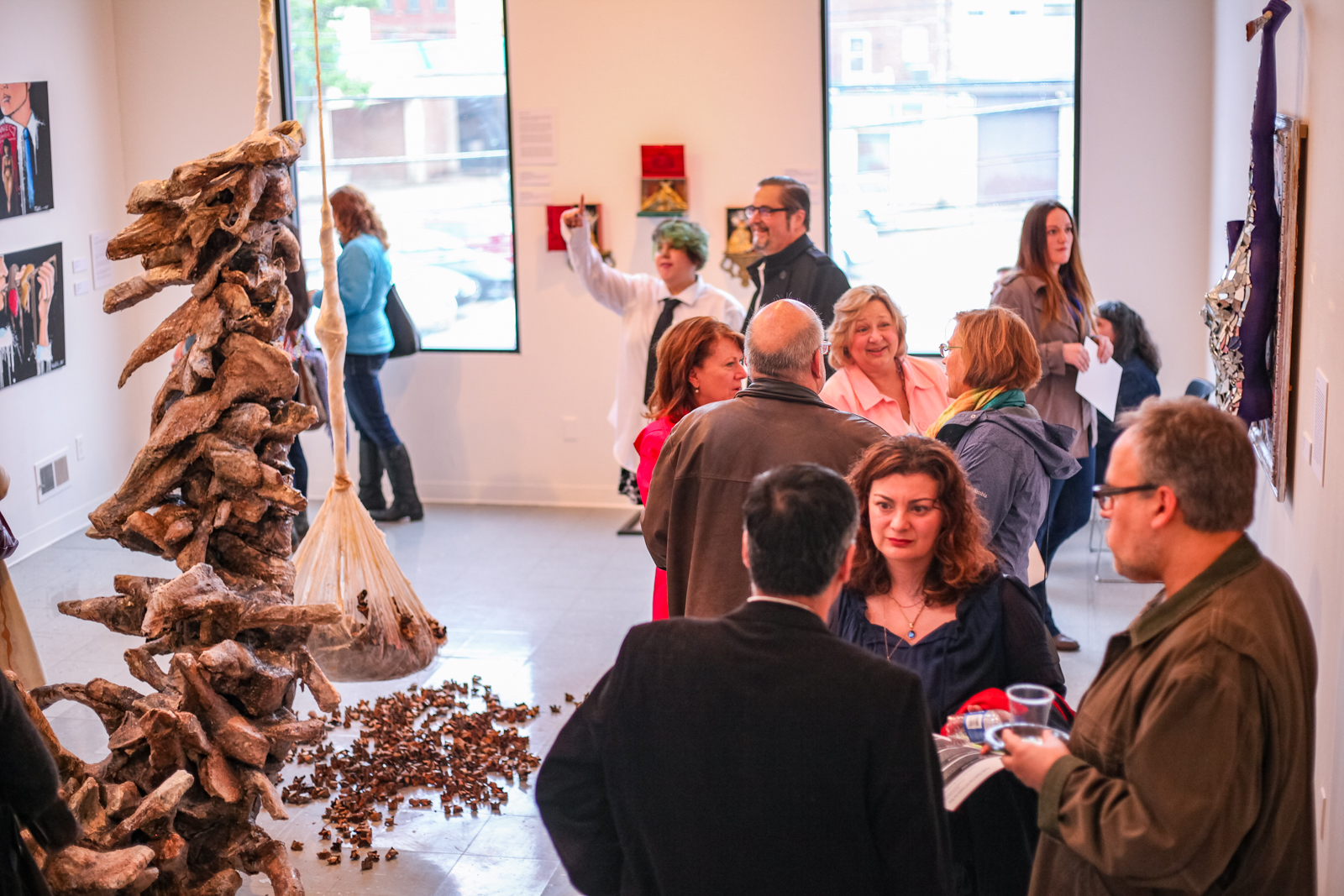 It’s rather ironic that on the day of Carolyn Pierotti’s opening of DIGS: Sexism in the Arts at Artists Image Resource (AIR) in the Northside, just across the river, a group of women were being “primped” to play football in their underwear for the Pittsburgh Rebellion, a lingerie football team new to the city. As much as it is a collective slap in the face, it proves that exhibits like DIGS are necessary more now than ever.

The exhibit, which delves into various subject matter surrounding sexism, is powerful and very deliberate.

“DIGS – Sexism in the Arts came to be because of misogynist behavior, fear, and an overwhelming feeling of isolation.  What are “digs”… comments that we, as women receive daily, making us question our ability, skill set and overall value. Historically women haven’t been seen, or heard.  When reading art history, women are systematically plucked out of the books, we are viewed as objects in paintings, our work is compared to our male counterparts, and there is a lack of wall space for us in the halls of museums and gallery spaces. Linda Nochlin posed the question “Why Have There Been No Great Women Artists?”, said Pierotti.

The works spiral into a poignant narrative of how sexism has intersected with each artist. Ivette Spradlin and Lenore Thomas’s “Casual Encounters” pointed in direct and disturbing sunlight, the manifestation of the dick pic. A blindingly malignant phenomenon that is characterized by this photographic litany of musings. The most provocative exhibit in the show, I found myself intrigued and disgusted, not by the body of work, but by the harsh reality it so graphically expresses.

Marlene Boas crafted a three-dimensional piece entitled “PerSISTER”, speaking to the struggle female artists face in recognition of their work, largely being overshadowed by their male counterparts. Set on frame, littered with sayings of empowerment and devaluation, the work literally bursts out of the wall with a haunting female torso, assaulted with glass fragments, creating an oddly soft and pungent sense of radical powerlessness. The decapitated figure reaches for the sky, seeking a place for solace. No name, no face, pulling itself out of the grossly overpopulated shadow of the superego.

Each work is more intriguing than the next, offering a unique perspective on what women face not only on a daily basis, but how the machine of sexism needs to be dismantled once and for all.

Art, in its purest form, is supposed to spark change, riddle the subconscious with questions about real issues, and help us become more aware of what is around us. While sexism will always be a part of our culture, with events like this, we can surely gain understanding about what goes on outside of our small bubbles of life.

On a side note, I love art shows, but more than that I love art, and a lot of times I see no reverence for the work. I observe more people consuming free food and drink than I do people consuming art and trying to understand what it’s all about. Huddled in corners with not a piece of art in sight, I hear conversations about nonsense; it’s like being in a perpetual Facebook live feed. I do hope Pittsburgh can evolve to a place where an art show can actually be about the art and less about the free food and seeing the same people we see at every other art event, eating the free food.

However, it’s a start.