This Friday Michel Demetria Tsouris is bringing her art show, “City Home,” to the Spinning Plate Gallery, (5821 Baum BLVD). The show will feature an exhibition on famous Pittsburgh icons and locations over the city’s history. Along with Tsouris, the artists whose artwork will be displayed consist of Terri Wolfe Izzo, Connie Merriman, and Rita Langas Wilson. Local was fortunate to get Tsouris and Wolfe to share their thoughts on the upcoming show.

How did you get interested in the arts as a profession

Michel: I had a desire to find a means of translating my experience when I was young. I believe that desire is inside each of us either as a smoldering ember or live spark that sets itself on fire, for life. Searching for the forms that will best match our own sensitivities, that is a trial and error journey. I experimented with poetry and music, writing and installation work before settling on painting as my primary medium. At some point, I realized I was capable, of making work that was evocative. I felt the power in that. I felt that I could make work that had the possibility of transforming both me and a viewer.   Acquiring the technical skill was for me a matter of deliberate and disciplined practice. I was not a particularly gifted draftswoman, but I was tenacious and I followed by desire with faith and patience.

Terri: Even as a child, I remember seeing paintings that were beautiful beyond words, created by Cezanne, Van Gogh, Monet, Derain, just to name a few. I went on to study art in college, however, my career path was design. I had a small design firm for 20 years but decided four years ago I needed to return to my first love––painting.

Can you tell me about your chosen medium for the upcoming event?

Michel: I did choose the simple medium of oil on wood panel, for a very specific reason. I have spent much of my career producing work that was more an exploration of my personal interior space. Also, that work was quite stylized, visually poetic, rich with metaphors, at times closer to surrealism. In the past two years I became more interested in engaging directly with the objects and places around me. I found that it is still a way to glimpse a psychological interior reality, but one which offers the viewer more access.

Terri: I work primarily in oil on canvas, although there are a few pieces that combine watercolor as well as charcoal on paper.

Why did you choose to capture these specific places in Pittsburgh?

Michel: I am returning home to Pittsburgh after 30 years on the west coast. This current body of work is my re-entry, my homecoming. Choosing the neighborhoods of Pittsburgh, and what I would call some of Pittsburgh’s icons, as my subject matter, has been both a reflection on past and present. It is an exploration of where I came from. It is a document to note the influences of the city’s neighborhoods, architecture, its geography, and all the ways it touches the senses. Reviewing this work, I am rediscovering this place and the tone that encompasses it, and me. I am also noticing that it evokes in all of us who share this place, as home, memories, rich with all that life deals us: memories of joy, pleasure, innocence, pain, loss and the simple comfort of the familiar. Memories of a thriving and a fading a longing and resurrection.

Terri: I chose to paint places in Pittsburgh, which in my opinion, captured part of Pittsburgh’s soul, rather than the familiar.  These buildings and structures resonate as “Unexpected Icons” of the city’s past and post-industrial present. Many of these places reflect loneliness and solitude—single structures amid areas of blight—while others communicate resilience and inclusivity, as found in buildings with chamfered corners that were cited in areas of civic importance. This series presents these places as part of the essential characteristics of Pittsburgh and its people.

What do you hope not only artists but also outsiders to the arts profession, take away from the show?

Michel: I hope that the work will remind them of their people, their friends, families, loves, hopes and all that ties them to this place. The work they did here, the lives they built.

Terri: For people to think about what being in this place resonates with them. And, why they call it “home.”

Is there any local artist follow you have recently learned about that have your interest? Where can we find their work?

Michel: I invited three other women artists to join me in the show. Each with her own individual means of expression, they have contributed work that is not only beautiful to look at but full of meaning and provokes us to reflect on this Home/this City. Terri Wolfe Izzo will show small and large works, also in oil, moody, lonely, dark, and irresistibly inviting.

Constance Merriman work is a look at the changing face of our urban neighborhoods, what is being lost and what is being created in the wake of this new wave of economic changes.  Her work asks us to ask ourselves about these changes, taking an assessment of the transition of which we are in the midst. And Rita Langas Wilson is offering works large and small in oil, focusing her keen eye on architecture from a period of great creative expressiveness and beautiful craftsmanship.

What are the future plans?

Michel: I am always prepared to be surprised. What comes next, will be just that, a surprise, which I hope I will rise to the occasion of, and follow that new subject matter down her new road.

Terri: I never know what’s next, but for now, I’m back to the landscape. To be continued… 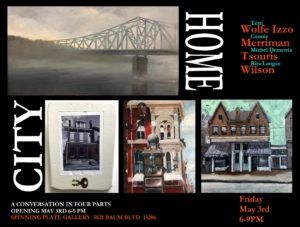 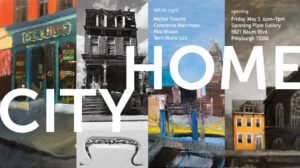