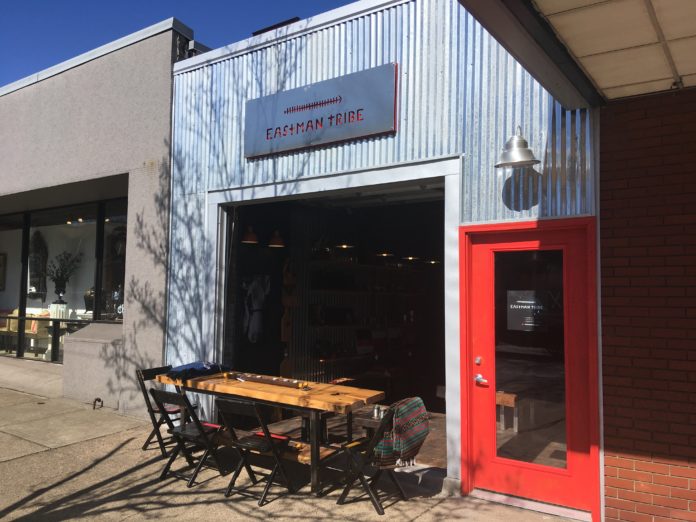 The artsy and bustling neighborhood in that of Regent Square has a new retail store presence….something small in the way of a footprint, but big in art and design. No, it’s not another restaurant or bar for that matter, but a brand-new brick and mortar store called Eastmantribe, founded by local artist, John Eastman. “Everything in life I look at is from a minimalist perspective,” said the artist when asked about his pieces. Eastman’s art focuses on the basics of design while utilizing a minimal number of elements in materials. This has been Eastman’s approach during his 18-year career as an artist, starting with pieces in galleries and museums. However, he started as a tech designer, crafting solutions for various industries in the tech field. “In the tech world, the goal is to problem solve by developing an elegant solution, meaning high functionality with minimal code or hardware dependency, essentially minimalism, only tech.  Ironically, now I’m after the same solution as a designer-maker in Eastmantribe only with a rugged product aesthetic ”. 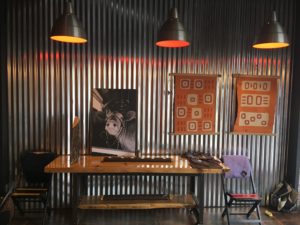 The Eastmantribe brand was formed 8 years ago as a design brand, making furniture as an art form, focusing on functional objects such as coffee, dining, and side tables, benches, sitting stools, and now textile products for the opening of the store. Eastman took on an artist’s approach while designing quality furniture and started selling his products online (houzz.com) after realizing how much people liked them.

New to the Eastmantribe products, will be expansion product lines, called Southwest Zen, and Eastman Cross. Influenced from his frequent time in New Mexico, Southwest Zen brings design ideas with a lighter grade of wood and bright color palette, and will focus on items such as colorful blankets, distressed leather bags, antique tools, table runners, and cactus Steel plant holders. Lastly, the store will feature Eastman’s long term work with crosses. Eastman’s work with crosses is not religious oriented, but the design is featured in a whole series of wood benches, ceramics, mugs, and shirts. “Even though it is a small footprint store, it will have a wide range of product diversity.” Eastmantribe’s flagship wood timber striped benches have a strong presence in the store as expected. The store will also feature complimentary products such as ceramics from Pittsburgh Center for the Arts Store, working closely with Maxine Plotkin, the shop’s director. 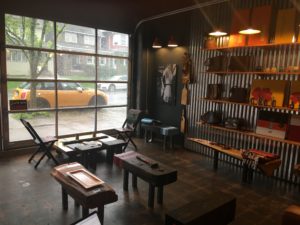 So one may ask why open a small furniture and art store in Pittsburgh now? Well, Eastman views this as a great opportunity as the city is on an upsurge with many diverse people moving here. “People are moving here to fuel the tech and medical boom. They need to buy furniture but are perhaps are looking for something different and not chain produced. I think they looking to buy handmade local pieces, not ones purchased from China factories. Eastman’s line of work has been successful nationally, selling products in the North and South Carolinas, various parts of Texas and California, Washington, and even NYC. “I feel these states have embraced minimalist design ideas earlier than the East, but now, the east is ready”.

The store, a partnership with Pittsburgh Center for the Arts, opened December 18 in Regent Square next to the Regent Square movie theatre and Concept Art Gallery. The outside of store features a facade of corrugated sheet metal (one of Eastman’s signature materials), and a metal and glass garage door, making a design statement in the area that does not exist. 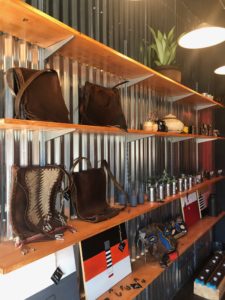 Later in 2019 there will also be another small space designed and built out by Eastman, called  Eastmantribe Life + Space, located on the opposite side of the theatre. It will be a type of space showroom featuring a living experience, with a live-in room, kitchen display, resting space, and more design products that could even feature Eastmantribe’s custom roasted Coffee beans.  “I saw an opportunity to create another space that demonstrates minimalist living in a very small footprint and thought this would compliment the store” according to the Eastman. More Eastmantribe stores are in the works.

For more information regarding Eastman’s work check out www.eastmantribe.com