What can you get done in 48 hours? A fair bit, most likely- several household duties, assignments for work, and still time to sleep and relax. However, most wouldn’t be able to make a film in 48 hours. 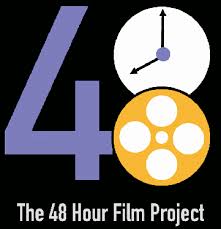 But these aren’t most people.

For the past 10 years, the Pittsburgh 48 Hour Film Project has given aspiring directors, editors, actors, and writers a chance to see their short films on the big screen. In the span of two days, competitors must write, perform, and edit their masterpieces, before they are shown to the public- and the judges. (To be fair, though, these are short films, not full length movies.)

All films must include a certain line of dialogue, character, and prop. It must also follow a certain theme or genre. The winner for Pittsburgh (and all other cities competing worldwide) will be announced at Filmapalooza 2018. Additionally, the 10 best films overall will be screened at Cannes.

Filming took place between July 14-16, and the screenings will be this Friday and Saturday (21st and 22nd) at The Oaks Theater in Oakmont. A “Best Of” screening will be held on August 11th at the same location. For more information about the project, see here. Tickets and showtimes are available here.