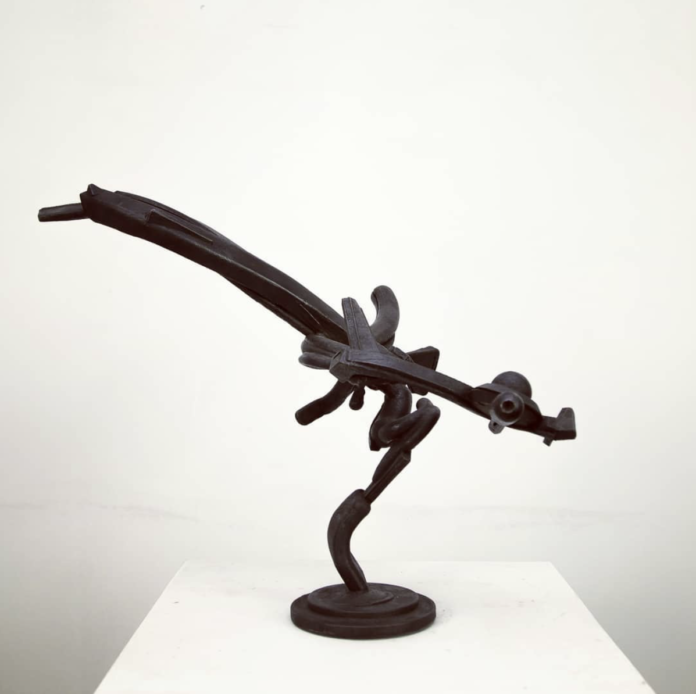 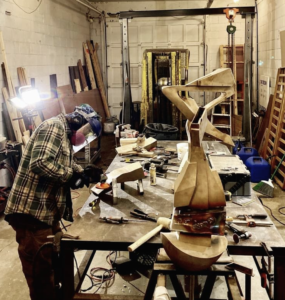 Sparks fly when his blowtorch touches metal. Music is cranked to the max. Beads of sweat hit the dusty, concrete floor. 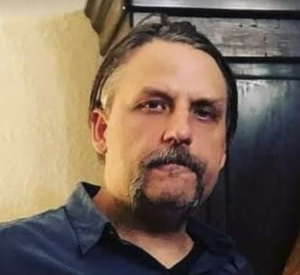 The 45-year-old sculptor uses digital processes, such as 3-D printing and virtual reality, along with a little good old-fashioned elbow grease, to hone his craft. He lets robots to the majority of the mundane tasks, like cutting and sanding, while he goes out and enjoys life. If he doesn’t like design, he simply presses “Delete”, which saves him time and money.

“It’s wonderful to be an amazing metal crafter or woodworker, but when you step over the line to an artist, it’s more about the vision,” he says. “You’re trying to create the best possible version of something. Computers are the way everything is made. They’re just another group of tools in your arsenal. Things I do on the computer inform things I do by hand and visa versa.”

His work is functional (there’s a zinc-coated steel piece on Sixth Street in Downtown Pittsburgh that doubles as a bike rack), as well as avant-garde (2012 Burning Man attendees went wild for The Cosmic Carousel, a 17-by-18-by-23-foot moving installation made from aluminum, steel, acrylic and LED lights).

Walsh grew up in the neighborhood. He had a part-time job hauling beer and ice at Victoria Beverage, the 4,400-square-foot building he now owns. It is a workshop for himself and other artists. A self-described nomad, the place has been always served as his touchstone. After living and working in California for a decade, he returned to find his welding cart in the same spot where he had left it.

As a teenager, he started doing graffiti and immersed himself in the urban skateboard culture. He eventually incorporated painting and welding into his art. Although he dropped out of art school, Walsh considers himself a perpetual student; he taught himself how to use a 3-D printer and is constantly researching new software that allows him to push his aesthetic in as many directions as it can go. He does private commissions, interior design work for restaurants and museum exhibitions.

Any kid with a library card and motivation can do the same. 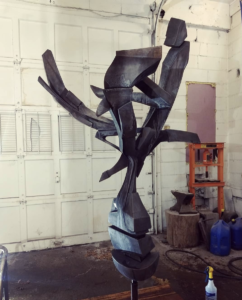 “I try to make a very utopian type of art that gets you out of your everyday,” he says. “This, for me, is a peaceful way of not being involved in all the political nonsense. We all need a place of refuge. Culture provides a place of sanctuary against a difficult world.”