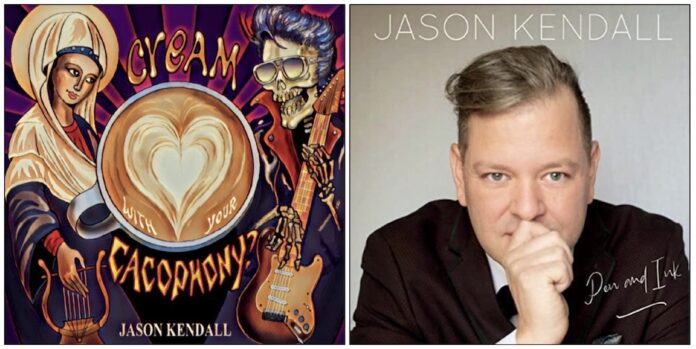 AS HAPPENED WITH many Pittsburgh creatives, the 2020 pandemic launched musician Jason Kendall into hyper-busy mode.

Cream with Your Cacophony? features 15 tracks spanning rock, folk, jazz and the spokenword synthsweep What Was It Like to Be Human (Exit Interview), emblazoned with a striking cover by Pittsburgh artist Bill Yund (worth purchase price alone) of St. Cecilia and Elvis Presley meeting for coffee, summoning shades of muralist Maxo Vanka and Fear and Loathing in Las Vegas illustrator Ralph Steadman.

It’s a distinct departure from Kendall’s usual music brand, and one he was eager to talk about with LOCALpittsburgh.

Q.  What got you interested in doing a Contemporary Classical album?

A.  I’ve always been intrigued with classical music, and I dabbled in composing even as a kid. At California University of Pennsylvania and West Virginia University I took composition from Dr. Andrew Kohn and Dr. John Beall and learned to analyze the idiom and see how it works. After college I put that knowledge to use mostly doing high school band arrangements, which definitely expands your range. Then I started playing around with a couple computer programs called Sibelius and MuseScore and found myself starting out some compositions. A lot of them stayed on paper, of course, but during the pandemic, I couldn’t play out, so I turned to the internet for online recording opportunities and discovered a site called AirGigs. It’s a marketplace for hiring session musicians, vocalists and audio engineers in something like 160 countries. Or you can hire yourself out for session work.

A.  Right, because so many people now record not in a commercial studio but in their home. I met musicians from Italy, Australia, London, all over the U.S. I’ve done about 150 sessions so far. Some were pro projects, some amateur, but the diversity of music is astonshing. When you’re creating a solo for a song, you’re really composing, maybe with a bit of improv, but for a session it’s going to be more structured even if it is original. So I got back into thinking about composition.

Q.  How did you find your string quartet?

A.  I looked on AirGigs and found a violinist-violist named Maria Grigoryeva, a master player from St. Petersburg, Russia. She’s a Berklee College of Music grad and now lives in America. On a lot of projects I was getting hired for, I’d see that she was providing the strings, and they sounded great. I reached out and told her I had some pieces I’d created for saxophone quartet and asked if she could adapt them to a string quartet format.

Q.  Did she do the transcribing and arranging?

A.  She said I could send the pieces written in standard music notation or played as a MIDI file. A lot of string session arrangers have learned how to take recorded music from MIDI or any instrument and set it for strings. I had to adapt the clefs, but it was very affordable to book a studio session and live string players and rehearsal. It only took about a week to get the completed files.

Q.  Did the files let you isolate individual tracks in case you wanted to make adjustments?

A.  Yes. The recording was done with multiple microphones, and you’d get three files with different parameters, maybe a close mike, a room mike, a larger room mike, whatever you request. Then you can mix those together.

Q.  With the original taken from a MIDI file, you risk getting something that can sound machine-like. And you’re not physically with the performers to guide them as they play. How’d you deal with that?

A.  When you make music on a computer, everything is set to a time grid. It can suck the life out it. The music needs to breathe and have the human element of interpretation. I did a piano part, then I was able to shape the tempos to slow down-speed up, add a rubato, whatever. I sent Maria that file, and the music she played to that could follow the tempo fluctuations.

Q.  So then the mixdown, maybe the most important and frustrating part.

A.  Mixing is a kind of dark magic I don’t completely understand. I had assistance from my brother Jeremy Kendall and Mike Nikou. Mike is located in Adelaide, Australia, and is a master audio engineer. I met him on AirGigs. 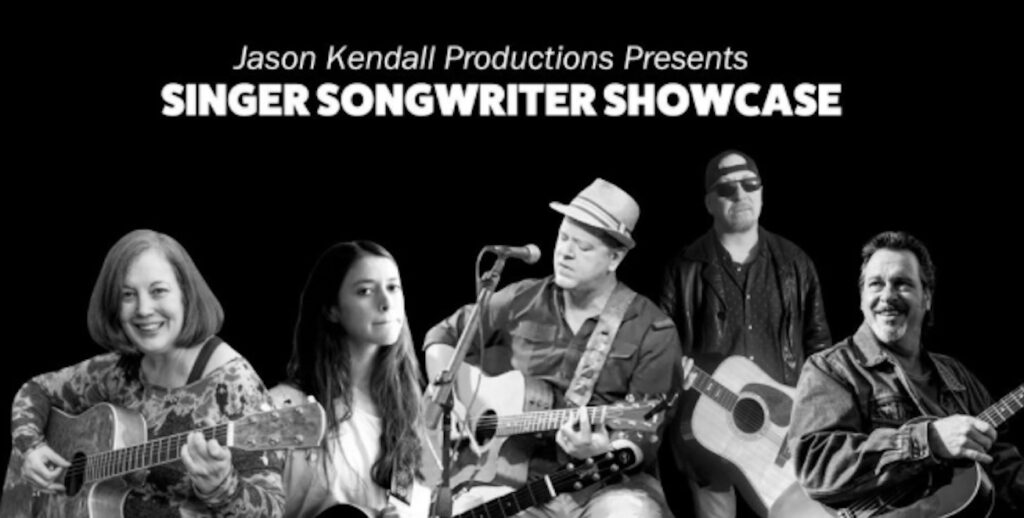 Q.  What were inspirations for these compositions?

A.  They’re all programmatic … impressions of different things I find interesting. I’ll create a melody and think of what it reminds me of. Salinger Sketches is five movements based on characters from J.D. Salinger’s literary works — Holden Caulfield, Phoebe, Laughing Man, Seymour Glass and others. Five Savannah Gardens came after a trip to Savannah, Georgia, which is an 18th-century town laid out in 22 squares. Jackson Pollock has more of an avant-garde approach, trying to create a piece that reflects his avant-garde painting style. Drops-New Born Rain is the most recent. It started out as a song with lyrics, but I got more interested in the string parts and creating multiple layers of melody growing out of the opening pizzicato. Kites and Morning Dances were originally for piano and solo flute. I adapted the flute to solo violin. You can hear the violin as the kite soaring along, the piano the person on the ground. Morning Dances was inspired by flowers opening, waking up at first light.

Q.  There is certainly a lot of movement in each piece, a lot of tempo and articulation changes and texture shifts. They demand full attention from the listener.

A.  I hope so. Sometimes a melody comes or a mood comes, and you start making sonic representations of things you see. Like Columbia Square in Five Savannah Gardens. The square was built in the late 1700s, a small park with shady trees and a garden. I see the Davenport House, a Federal-style mansion built in 1820. In that piece you’ll hear a quick melody, and then a second melody, slower. I see people walking on the street at different paces … a fast-paced couple, now here comes the slow guy, then there’s a tour bus, then a trolley. I think of images and movement, and that informs the music.

Q.  You’re re-creating a moment in time as you’ve experienced it.

Q.  Murder and voodoo and disturbing Southern Gothic. Great musical inspiration there! Are there plans to have Pen and Ink performed live?

A. Absolutely. Radiant Strings is a very versatile Pittsburgh group of string players, and they’ve been rehearsing the tunes. For the actual concert, I’m envisioning it as more of a social event with wine and cheese, some other art going on, an occasion where people enjoy the music in a relaxed way.

Q.  Any other thoughts about creating classical music in the 21st century?

A. What I find with current classical music is there are great new composers mostly being heard in academic settings. As far as making any commercial success with classical music, it comes from pairing with other media, usually a score for a blockbuster movie or TV show. A composer has to find their own voice that makes them unique. You look at classical music of the 18th century, those composers were creating music for events, church services, court functions. They adapted their music to the environments where it was being heard and to the audiences hearing it.

Q.  Is there a place in today’s classical music for what’s called “the avant-garde”?

A. Definitely. The avant-garde informs future music. It prepares new ways to express new ideas with unique voices. You’re always looking for new sounds, whether it’s through melodic and harmonic devices, or manipulating instruments, coming up with new techniques. Sometimes composing is more fun than performing, like working a puzzle and then saying to people, “Listen to this and see if you like it. I sure liked making it.”

* Cream with Your Cacophony? and Pen and Ink are available on iTunes, Pandora, Deezer, other online services as well as CD format. 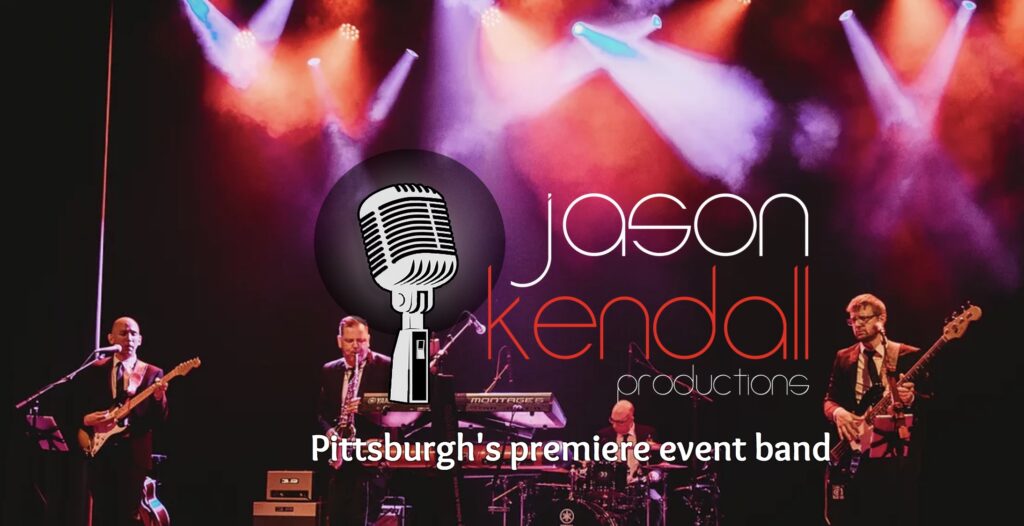