ACTOR/PLAYWRIGHT Elizabeth Elias Huffman’s Not My Revolution is not your ordinary time-travel theatre.

Both, however, are bonded by the same brutal displacement and irreversible catastrophe marking the lives of millions in our world this very moment.

A Monongahela, Pennsylvania, native, Huffman received her theatre training at University of California, New York Academy of Theatrical Arts and the British American Drama Academy in Oxford, England. She has acted in film and television and in theatres across North America and Europe and teaches master classes in Shakespeare, Restoration Comedy, Commedia Dell ‘Arte and Storytelling with Masks.

She’s directed over 30 works ranging from classical theatre to contemporary plays such as Heather Raffo’s 9 Parts of Desire, Cherríe Moraga’s Watsonville, Some Place Not Here and Richard Montoya’s American Night: The Ballad of Juan José.

Yet in recreating classical forms for modern viewers, Huffman consistently seizes the chance to innovate and challenge. Her Oedipus the King fused ancient Greek style with Japanese Kabuki, Noh and Butoh elements; she recast Shakespeare’s King John as a tale of 20th-century American political intrigue; The Merry Wives of Windsor was set in Windsor, Kentucky in 1955, replete with country fair games of chance, pie-eating contests and Appalachian folk music.

Not My Revolution is a good fit for Off the Wall Productions, a company founded in 2007 by playwright Virginia Wall Gruenert and producer Hans Gruenert with the explicit mission of changing the world one play at a time.

“My most concise answer to why should we do this play now,” says Erika Cuenca, Off the Wall’s Associate Artistic Director, “is how can we not. Every day, every minute, somewhere in the world a moment arises to reassert the heartbreaking relevancy of this play.”

Recently, Ms. Huffman spoke with LOCALpittsburgh between rehearsals for Not My Revolution.

Q.  How did you get the idea to create this play?

A.  Six years ago I was looking for a project to take to a festival in Germany and had a book of plays from the 1960s that included a 1967 solo play by Josef Bush called French Gray. It was about Marie Antoinette in the last hour before her execution. Over the years I kept coming back to that play to see if I wanted to perform it. For various reasons it did not quite work for me entirely … but there were elements that always intrigued me. In 2016, I was very upset about the war in Syria and wanted to write something to put a human face on the conflict. In deconstructing French Gray, I realized there were similarities in the revolution in France in 1789 and in Syria in 2011, and that if I could weave a modern story with French Gray as a springboard, I might have a new solo play.

Q.  What finally got you going full speed ahead on writing the new play?

A.  I started the writing process in February, 2016. I thought I would apply to a theatre festival in Hanau, Germany, where I had often performed in years past. To my surprise they accepted it! The festival took place the first week in October, so I had to hustle to get the first performing draft ready by June.

Q.  Once you finish a script, especially a one-person show like Not My Revolution, you have to figure out how to stage and perform it. Can you describe that process?

A.  Because of the large amount of Syrian refugees coming into Germany, the subject matter was of enormous interest to German audiences. I was also invited to to bring the production to Bremen Shakespeare Company in Bremen following the Hanau festival. So my director and collaborator, Louanne Moldovan, and I had to mobilize right away and get the show on its feet by August in Portland before leaving for Germany.

We approached the beloved Portland theatre patron Ronni La Croute. She read the play and agreed to underwrite some of it, and she has continued to support this show in all its iterations. Without Ronni I would not have a show at all. We also did an additional Go Fund Me campaign, and many friends and family generously donated to the project that we raised enough to put it up in a three-day workshop production at The Milagro Theatre in Portland, Oregon, in August, 2016 to get set for Germany that October.

Q.  And some honing-type productions after that?

A.  The play had a wonderful Equity production at Fusion Theatre in New Mexico in 2018 with a totally different design and interpretation as envisioned by director Laurie Thomas. Not My Revolution has also gone through several work-in-progress productions in Portland and New York as I continued to try to get the script to a place where I felt it really came together. The upcoming production in Pittsburgh at Carnegie Stage for Off the Wall Productions is the culmination of all of those iterations for what I hope is the definitive version.

Q.  What about the stage presentation — music, lighting, set, etc.  What was your process in organizing that?

A.  I had been directing for years in Portland, and like most directors I had my go-to designers. Lawrence Siulagi created the gorgeous sound design, most of which I still use, and he also designed the title projections for a later iteration of the play. In addition to the original sound design we have Pittsburgh’s beloved sound designer Steven Shapiro who has added his artistic touches to the mix. The film footage was designed, edited and shot by Portland actor and video artist Mario Calcagno. Originally the set was just a door and some scattered furniture. It has now evolved into a magical and evocative design beautifully created for the Pittsburgh production by Tucker Topel. I am lucky, too, that the lighting design is by veteran Pittsburgh designer Bob Steineck.

Q.  Why is the message of the play personally important to you?

A.  I strongly believe that theatre should engage and provoke the audience to look at themselves and examine their own feelings in relation to whatever play they are watching. “Hold the mirror up to nature,” to quote the Bard. Not My Revolution is about the forced displacement of two wealthy women due to civil war, and the play asks you to consider how you would react if war came suddenly to you. I wanted to bring awareness through this story of the human cost of war, particularly in Syria but also historically in the French Revolution, and to ask why history keeps repeating itself as we still continue to wage war on each other.

Q.  Why do you believe this message or themes should be important to audiences?

A.  I hope they’ll be moved to laugh, to get angry, to wonder and possibly to cry … and then I hope they consider what part they are playing in these global issues. In this play I specifically ask the audience to think about the women whose lives are upended by war and how they are left to fend for themselves and their fractured families. Sadly today, once again, millions of people in Ukraine are fleeing for their lives. Not My Revolution asks the audience to contemplate the consequences of choosing violence over peace.

I also want to provide the audience with some hope. I have to believe that it is hope and the power of love that will get us through these difficult times.

Q.  Anything else you want people to know before they see the play?

A.  Yes! On opening night, Friday, June 17, we will have a Middle Eastern and French nosh after the show. That alone is worth the price of admission!

Also we are having two paneled talkbacks following the Sunday matinees on June 19 and 26. We’ll have some very special guests respond to the play and tell us about their work. Some work with refugees here in Pittsburgh, others will share their knowledge of the French and other Revolutions. Others will speak about the history and psychology of wigs and the importance of hair in different cultures. Even if you attend an evening performance you are welcome to come back to attend the Sunday talkbacks by showing your original ticket after the matinee. 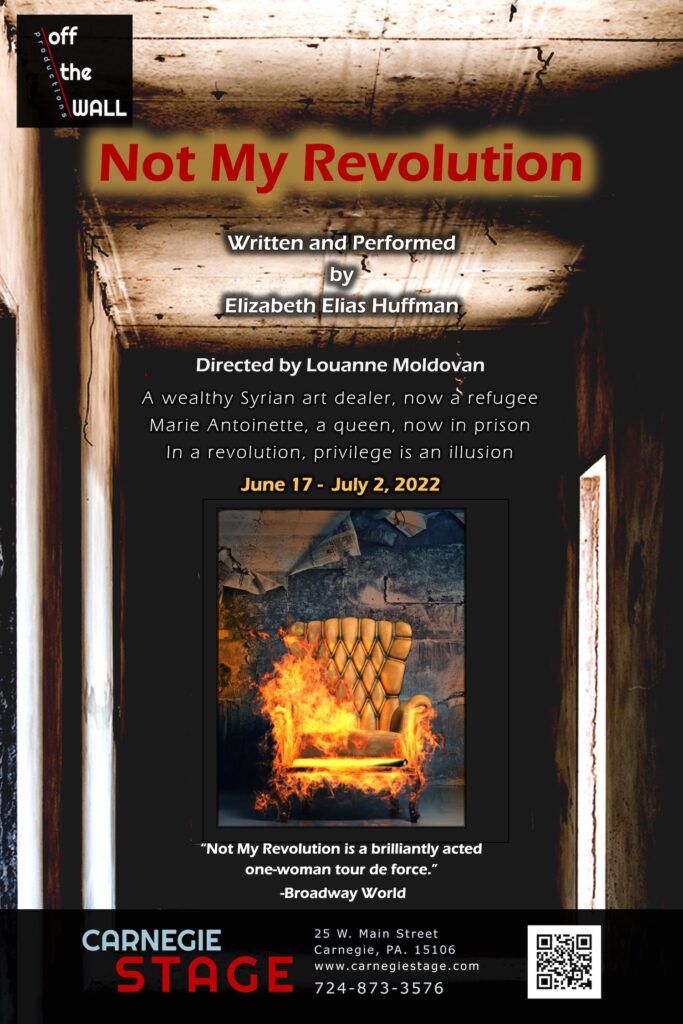