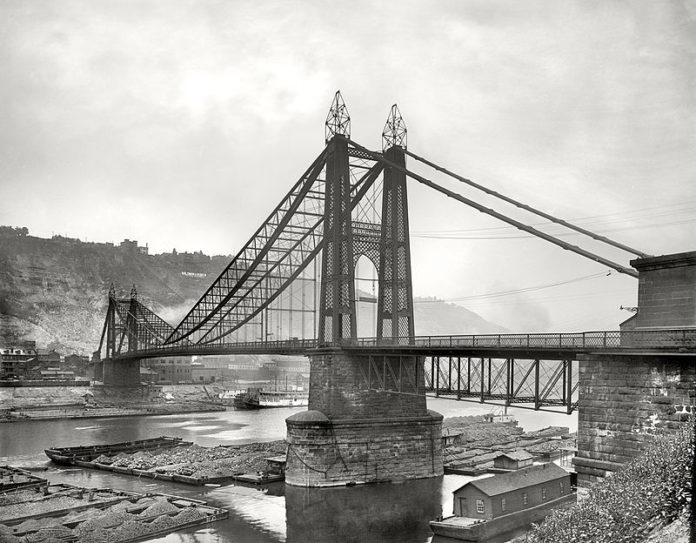 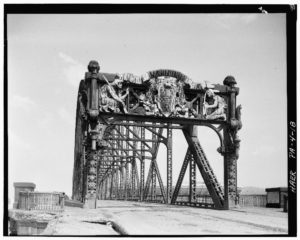 Talking about “The Point Bridge” in old Pittsburgh is imprecise — there actually were two of them, and at one time they simultaneously were side-by-side.

Today’s Fort Pitt Bridge carrying Interstate 376 now is on that site, feeding the Fort Pitt Tunnels and leading to the western suburbs.

The original Point Bridge, a suspension design built in 1887, and its successor, a cantilever-truss structure opened in 1927, both joined the very tip of Downtown Pittsburgh with West Carson Street.

What’s now called “Point Bridge I” had ornate twin towers and a magic-kingdom kind of look. Point Bridge II was more utilitarian and Pittsburgh-like, looking something like a railroad bridge. 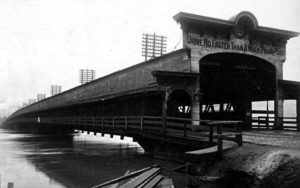 Both were victims of time and progress as transportation to and from the city grew from pedestrian, trolley and horse-drawn to the stricter capacity needs brought on by the proliferation of automobiles and trucks.

When it was time for the first bridge to go, its replacement was built directly beside it, a few feet upstream, so there would be no interruption of traffic.

Before television, people were fond of being spectators at construction sites. Photos and stories document how people would watch from both river banks and from the new bridge itself while the original structure was being dismantled. 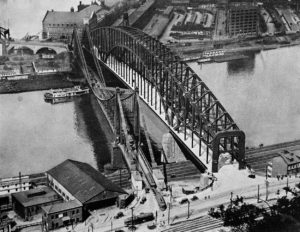 The other side of the Point, heading to the Northside, also had fancy bridges but neither was named with the word “point” included. They were the Union Bridge  (1875-1907), a lovely wooden structure that had to go because it was too low-slung for commercial river traffic on the Allegheny, and then the Manchester (1915-1969), an ornate steel structure adorned with fanciful sculptures of the warrior Guyasuta, the pioneer Christopher Gist, and fabled characters — steelworker Joe Magarac and coal miner Jan Volkanik.

The Manchester was replaced by today’s Fort Duquesne Bridge, which for six long years was derided as “The Bridge To Nowhere” because state authorities bollixed property acquisition on the North shore and the bridge ended in the sky while land issues were sorted and completing engineering and construction were accomplished. 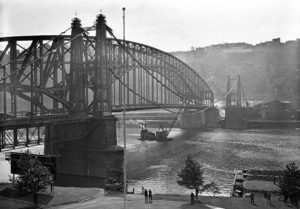