Animal bones, ghost-like women, and the disapproving grimaces of burly men fill the room of the Boxheart Gallery’s second floor in the latest exhibition Distortion. Artists Kyle Ethan Fischer, Carolyn Pierotti and Caleb Thimell all attack the human experience of identity and history from a different angle, but bring the work together in an eery yet thought-provoking atmosphere.

Carolyn Pierotti, known for her female-centered works, creates large imposing paintings in deep blues, bold greens and stark whites. The work has all the gravitas of famous male painters, such as Rouault, but strips the faces of all extraneous detail, instead using rough brushstrokes to give weight to imposing robed figures, some almost Shakespearean with crown-like shapes growing from their heads.

In What They Don’t See, three figures all look in different directions, the main female figure in the center in her beaded necklace and dramatic red lipstick peering down at the viewer, condescendingly. It’s unclear what the title is referring to and even the figures in the image look almost uncomfortable with how close they stand, but the entire composition creates the feeling that the observer is excluded from the action and is instead forced into the undesirable role of an onlooker and outsider.

Caleb Thimell’s art is primarily ink or pencil on paper. These portraits are strong, dramatic, slightly cartoonish representations of characters that are evocative of 1930s film posters and old union posters. The women are glamorous with mysterious eyes and big hair, and the men often appear weather-worn with twisted facial features and hugely exaggerated muscles, such as in Blue Portraits.

Discus Thrower Action Figure shows a man in baggy clothes, who is imitating the same famous Grecian pose. What ought to be an average man is turned into an almost legendary figure with oversized Hulk-like fists and a seriousness to the small-scale work that gives it greater importance that places it in a long tradition of portrayals of the male body and how masculinity is represented through the ages.

Kyle Ethan Fischer – who is both a 3D sculptor known in both the gallery world and in films – takes this relationship between the viewer and the art one step further, directly challenging our understanding of current political dynamic. Using materials from doilies to toy soldiers to horsehair, he recreates items found in nature, layering on additional layers of paint and welding them together with different objects to give birth to entirely new creations, one of which, he even referred to as a sort of chimera. 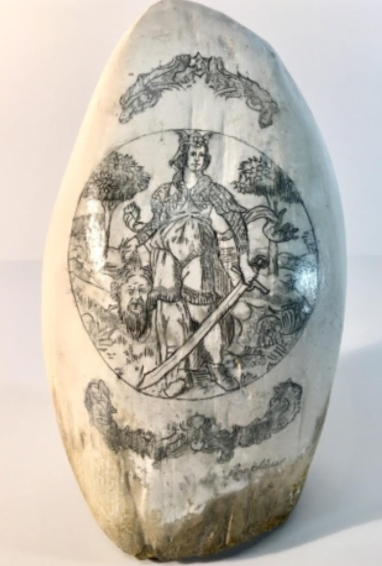 Featured in the exhibit is a large imitation whalebone, Adam’s Rib, an imitation rhino horn – coincidentally made shortly before the repeal of the ban on big game trophies – and a group of imitation whale teeth, known as tabua, that include scrimshaw of quotes from John McCain, Gabrielle Giffords and others as well as parodic representations of famous imagery from Western art (Romulus and Remus, Judith and Holofernes, etc.) to provoke dialogue on issues of gender, the #MeToo movement, gun control and more. In Cow Boys and Indians, a fabricated skull can be turned around to show a chase scene between an armed cowboy and a Comanche Indian.

About his works, which are composed of recycled materials, draw on his Native American heritage, and that play on the contrast between nature and industry, masculinity and femininity, he says, “It’s about values and representation in politics…I like to make objects that put this duplicity out there where there could be many meanings but then I am presenting the information for you to question and create a dialogue.”

Despite – as the title promised – distorting both tradition and perception of the figure and its definition, the human remains, ultimately, at the center of the exhibit. Distortion is a relevant and timely collection of art that draws on mythology, history and ideas of play to challenge viewers to reevaluate what it means to simply exist inside of a specific time and place, especially one pulled apart by current power struggles and identity conflict.

Distortion is free to the public and is open through January 12th.