The music of Nobel Prize-winning artist and legend Bob Dylan is arriving in January at the Mr. Smalls Theatre, but not in the way you might expect. The Mendelssohn Choir of Pittsburgh will be performing an oratorio of his greatest songs, “The Times They Are A-Changin’: The Words and Music of Bob Dylan”, taking the lyrics and melodies of the beloved folk singer to new heights, unheard of before by audiences.

The music of Bob Dylan has undoubtedly changed the face of music forever, and in this newest work, one of the greatest musicians of the 20th century will meet the tradition of classical music. The world premiere event will be conducted by Steve Hackman with the Mendelssohn Choir by over a hundred singers and accompanied by an instrumental ensemble.

Innovator Steve Hackman, the genius behind FUSE at the Pittsburgh Symphony Orchestra, which included the works Beethoven + Coldplay and Drake + Tchaikovsky, is the composer behind the Bob Dylan oratorio. This performance of his will be his only appearance in Pittsburgh for the 2018 season.

After “The Words and Music of Bob Dylan” premieres at Mr. Smalls, it will not be performed again until possibly later this summer at an event TBA. The oratorio will be also be played around the country, by such outstanding groups including the New York City’s Baldwin Festival Chorus, Boston’s Chorus Pro Musica, and the Nashville Symphony among others.

The first half of the performance, Matthew Mehaffey will direct the Mendelssohn Choir in performing works by the Beatles, Leonard Cohen and Radiohead. 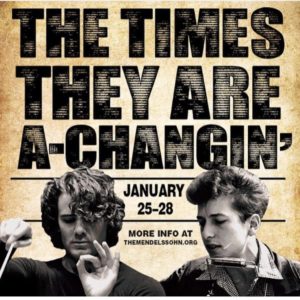 Tickets for “‘The Times They Are A-Changin’: The Words and Music of Bob Dylan” from January 25th-28th, 2018 at the Mr. Smalls Theatre can be found at https://www.mrsmalls.com/.