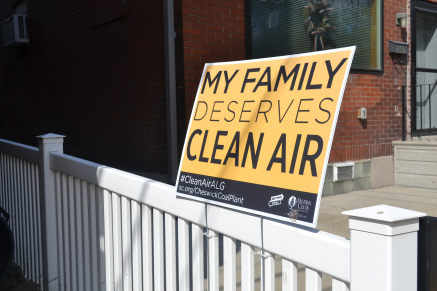 Since moving to Pittsburgh in 2006, filmmaker Mark Dixon always had a creeping awareness of the stench that comes from air pollution. He would jog around Highland Park where he used to live.

“I smelled weird smells, it grew so frequent and I was frustrated by it,” said Dixon. “I didn’t want to jog by an area that smelled of sooty stench”.

His awareness wasn’t fully piqued until he crowdfunded a journey to cover the Paris Climate Agreement as a citizen journalist. He was concerned about climate change and he wanted to find something local.

He chose air quality as his subject because of a March 2016 Consent Order and Agreement (COA) between the Allegheny County Health Department and U.S Steel on air quality violations from the Clairton Coke Works, the number three facility ranked on the Toxic 10 List.

U.S. Steel did not respond to requests for a comment. According to the coke works compliance report, the facility has so far met the requirements from the March 2016 Consent Agreement. They fixed three coke oven batteries and voluntarily added another battery to its compliance plan in June 2017.

There were previous COAs in 2007, 2008, 2011 and 2014. U. S. Steel completed the corrective actions and supplemental environmental project and paid the civil penalty required by the 2007 COA.

The consent agreement stated that U.S. Steel must inspect and fix its coke ovens and come into compliance within 3 years. The facility paid the $3,948,000 of the previous penalties accrued since 2009 and would pay the final $25,000 of the assessed fines.

The agreement came after PennFuture announced an intent to sue U.S Steel for 6,700 violations from January 1st, 2012 to May 31st, 2015. They claimed the nation’s largest coke producer was emitting pollutants that negatively affect health.

Since then, PennFuture announced their “Toxic Neighbor” plan that targets the Clairton Coke Works. The announcement of the consent agreement disappointed Dixon.

“It felt like a breach of public trust and made me deeply question the purpose of the Health Department,” said Dixon. “I decided to start this documentary to get to the bottom of why air quality is a persistent issue in Pittsburgh and immerse myself in the problems and potential solutions”.

That documentary is tentatively called Inversion: The Unfinished Business of Pittsburgh’s Air. His focus for the film is in Mon Valley, close to his home in Squirrel Hill South. The Edgar Thomson Works and the Clairton Coke Works are in that area.

“I’ve been trying all types of things since then,” said Dixon. “From buying and testing citizen science and low-cost monitors to measure particles and volatile organic compounds (VOCs), talking to air quality community members about the challenges, calling the Health Department to talk about air quality problems and ask them questions”.

A common question he has asked is; Where the smell is coming from? Frustrated by being unable to get an answer he decided to use his time and money to research.

“It’s coming from the South or South East. It’s somewhere in between Braddock and Edgar Thomson Mill and the Clairton Coke Works. I can’t pin it down with any factual basis.”
Dixon has tracked weather data, inversion data, and used air quality technology like volatile organic compound (VOC) monitors and particle sensors in his home to find where the smells are coming from.

“I wish that the Health Department would do that work,” said Dixon. “It’s very frustrating that this has not been solved yet, they have worked on this with many more researchers for decades longer than I have”.

“We do know the main sources that are responsible; but since there are also other sources that contribute, we are exploring various means to better understand how much each source emits,” said Ryan Scarpino, Public Health Officer for the Allegheny County Health Department.

“That’s what bothers me. That they release this every day,” said Cheryl Hurt. As she looks out the window as the Clairton Coke Works releases white smoke into the air. “I know how harmful it is for us.”

Hurt runs a daycare out of her home in Clairton, a few streets up from the Clairton Coke Works. She understands that emissions today are different from when she was younger.

“The particles that are there now is more harmful now than what we grew up with, there’s an odor that you can smell,” said Hurt. “People who aren’t from Clairton notice the smell, we are used to it”.

A 2018 study from the Surveillance and Tracking of Asthma in our Region’s Schoolchildren (STARS) on children from Clairton Elementary School, found that 18.2 percent of children suffer from Asthma, nearly doubling the rate reported by the Commonwealth of Pennsylvania.

Hurt is aware of the effects and long before reports on the children’s asthma problems were reported, she was trying to mitigate the risk with her Speck Air Quality Meter that she got from the local library.

The device detects and calculates the amount of fine particulate matter in the air. The monitor gives the number of particles in the air, along with a corresponding color, green is good, and red or orange signals poor air quality.

“When it says that it’s bad or moderate, I keep the kids inside,” said Hurt. “I don’t open my windows, it’s usually bad [pollution] outside even when it’s a good day”.

After a yearlong search for a new house, John Macus and his ex-fiancé purchased their home in Jefferson Hills in 2008 because of the big backyard that came with his house.
“We purchased the home during the recession and he plant was also in the recession,” said Macus. “At the time there wasn’t as much emissions coming from there [the coke works] that time, so there was no way we could see the emissions coming.”

Within the first month of living there, the plant began running again. Macus said he and his ex-fiancé would wake up with shortness of breath, headaches, and migraines.

“When you go outside and ask what’s that smell and how is it getting in the house and the windows are closed,” questioned Macus. “Then you drive by the place and figure out where it comes from, you wonder what did we move next to”?

Macus prides himself on fitness, he runs 15 miles with a 70-pound bag to train for one of his hobbies, Spartan races. The feeling of that training pails in comparison to the symptoms he gets from pollution.

“On the worst days, I feel sick, nauseous, migraines, you feel sluggish, and gasp for air,” said Macus. “. I get winded [from the training], but not like how the pollution gets me.”
He tried calling the Clairton Coke Works to talk about his issues with pollution, the calls would be so frequent, that they started referring him to the emergency services.

“Half of Jefferson Hills Fire Department came once, they brought EMTs and trucks up”, said Macus.

The firefighters came into his house and checked the property with a carbon dioxide detector, instead of one that registers benzene and sulfur.

“The two firefighters stood on my porch, one said he couldn’t smell it, and another said he gets similar smells in his house in Elizabeth”, said Macus.

They sent him an air quality monitor, and he went out on his porch the next morning and found the evidence he was looking for.

He was frustrated when he reported back to the Health Department what he found. Despite the evidence he found, they couldn’t pinpoint the source.

“We are continually working with partners and organizations to determine if there is any action that we may be able to take,” said Scarpino. “This is a complicated issue and the question is not one that is easily answerable”.

Macus had attended meetings with groups like PennFuture, GASP, and others, but he wasn’t there for talking, he wanted action.

Along with Cheryl Hurt, he filed a class action lawsuit in May 2017 against U.S. Steel in Allegheny County Common Pleas Court.

They alleged that emissions from the Clairton Plant have affected plaintiffs and members of the putative class of nearby homeowners, allegedly interfering with the use and enjoyment of their properties and causing unspecified property damages.

“It felt like real change was coming when the paperwork was coming through,” said Macus.
The case was filed for consolidation with another case against U.S. Steel, filed in June 2017 by Cindy Ross, a resident from Clairton.

One day, he got a call from one of the attorneys who was representing him, saying that another group of lawyers in the case was not using his complaints.

“When he called me and said [his part of the lawsuit] was falling through, it was heartbreaking.”

The American Lung Association gave the Pittsburgh Metropolitan Area an F rating for air quality and said the air quality in Pittsburgh is not improving on April 18th.

In January, the Allegheny County Health Department’s Air Quality program updated its civil penalty policy so that higher penalties can be levied for violations.

They hope that the higher penalties will act as a deterrent for companies that violate clean air standards and lead to overall improvements in air quality.

Donna Frederick, a Natrona Heights resident, said she only has one request for facilities and organizations involved in the air quality battle.

“I just want to live and want my grandchildren to be able to breathe clean air! It’s a reasonable request.”