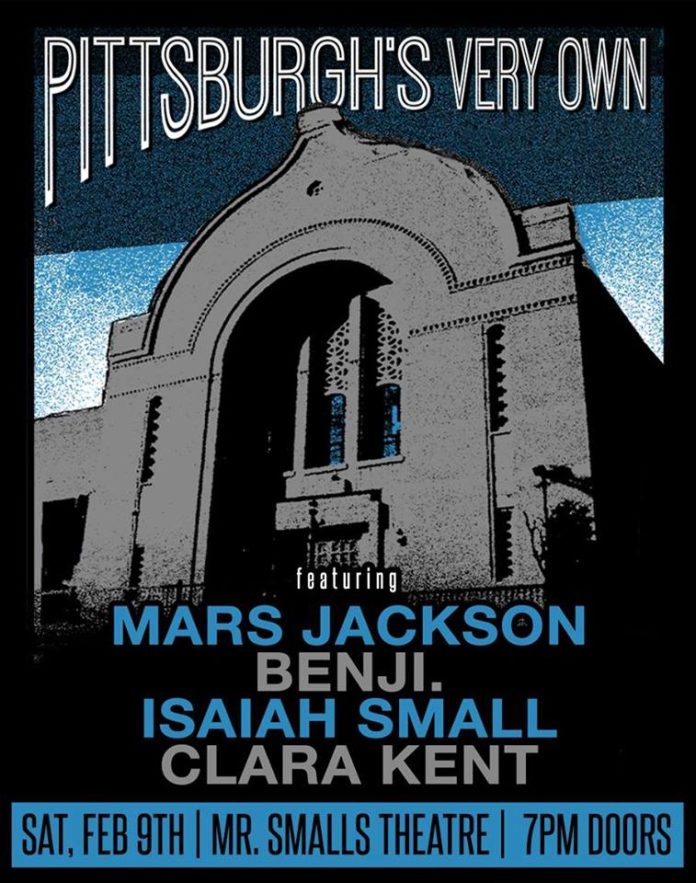 On Saturday, February 9, Mr. Smalls Theatre will present Pittsburgh’s Very Own, a quarterly series with some of Pittsburgh’s top artists. The artists for next month’s event include the talents of Benji., Clara Kent, Isaiah Small, and Mars Jackson.

The event will be full of energy as the artists will have live bands and DJs performing with them.

“We are going to genre-blend as we present hip-hop with full bands,” Isaiah Small said.

Small contributes the late Mac Miller as setting the tone in Pittsburgh years ago.

“He presented himself as a hip-hop artist who fused in elements of jazz, R&B, and alternative music,” Small said.

“Benji., Clara, Mars and I are carrying the torch as all of our performances will feature full bands, DJs, and a whole lotta colorful singing.”

You can expect a night of soul from artist Clara Kent. She will introduce new music during the event. Check out her 2018 album AURA here.

2018 was a great year for music by these artists, but 2019 looks even more promising.

Benji. believes 2019 will be the year his music hits the next level, but you can’t deny this past year was good to him with the release of Smile, You’re Alive!

“We want to hit the ground running and present ourselves in the best possible manner so that you leave with an experience,” Benji. said.

As an interactive part of the concert, Benji. will allow the fans who buy a ticket in advance to choose the setlist. More details will be explained closer to the event date.

“We want fans to be just as engaged and involved as we are so we’re already on the same roller coaster ride from start to finish.”

Pittsburgh’s Very Own will be Mars Jackson’s first show of 2019, and he will be kicking it off with the energetic Paul Keys Band. Jackson said he’s going to make “some hearts dance,” referring to his electrifying single “Heart Dance” from his 2018 album Good Days Never Last Forever.