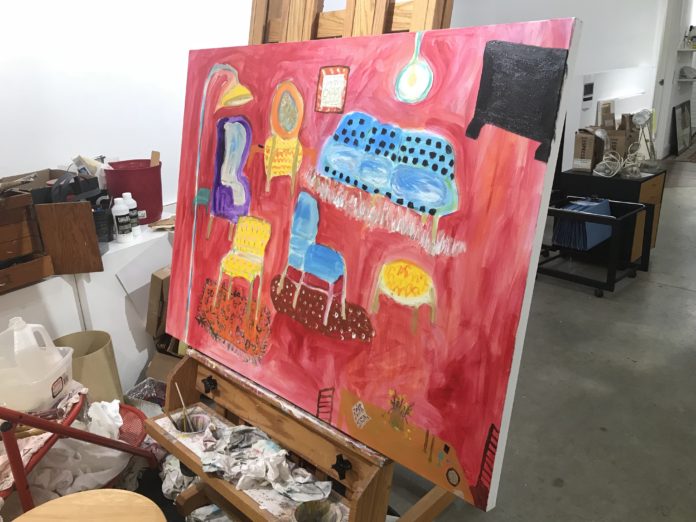 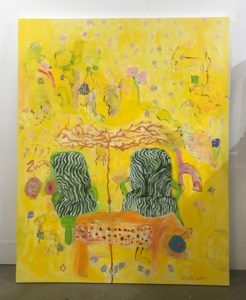 In a 2,000 square foot former laundromat in the trendy neighborhood of Shadyside is GalleriE CHIZ. Over the 22 years that it was in business, the gallery represented over 200 different artists from across the globe. Enterprising owner and local artist Ellen Chisdes Neuberg herself has been featured in prominent museums, such as the Carnegie Museum of Art and the Andy Warhol Museum, and even in film for works playful paintings and somewhat surrealist sculptural work, described by some as “weird.” Now, Neuberg is finally closing the gallery doors and opening up a new chapter in her life. The painter sat down with us in the gallery, surrounded in the background by her large abstract canvases and accompanied by a recording of 1930s jazz tunes, to tell us about her next move.

On her next move:
“I’m a painter, basically, though I’ve done a lot of sculptures. They’re funky and say things about things that are going on in the world and life and people – with humor, usually. Some I’ve won awards with and they’ve been in museums. I’ve been a member of Associated Artists since sometime in the ‘70s or ‘80s. 1900s, not 1800s. Don’t know when exactly. So I’ve had some work in the Carnegie and the Warhol… I’ve been here a long time, I’m old. It’s time. My assistant was leaving to have more time to do his writing. I just didn’t want to train anyone else and I was going to start slowing down anyway. And it was good timing, though I wasn’t quite ready – but I am. I am concentrating on my own art right now… I’m painting like crazy and experimenting… It’s giving me some freedom to think about my own art more. I’m really having fun and I’m enjoying it.” 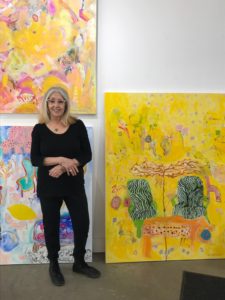 On her latest artwork:
“The art I’ve done has been mostly, other than the sculptural funky things, are mostly abstracts because I really liked expressing things in an abstract manner…I feel like I’m now relearning how to paint…I’m having a good time and trying different things…There’s usually something that reminds people of people. I’m a people person in many ways, but I’m also an only child and I’m used to myself and being alone, too, so I can do it either way. The fact that I always have people in it, I’m trying to force myself not to put people in my paintings. I started out reading a lot of Architectural Digest, all sorts of magazines and going through pictures of things that I see… You look at all the furniture and you never see a person in any of these pieces. They’re there, though, for people to live in that environment, but they never show the people. What I’m doing is chairs and sofas and tables and things without any people. I’m sort of on a chair kick; I don’t know how long it will last. The second one I did felt really depressing, and felt lonely. The thing that I’ve said about this and closing the business is the part I miss the most are the people. I found people all over the world coming in daily… I’ve learned a lot and I’ve enjoyed a lot of the connections with different people, so it bothered me to see some of these paintings that seemed empty in a way. The rooms [in the paintings] are lonely. It felt really lonely with just a bunch of chairs. There’s newspapers, but no one in the chairs. This is what I’m feeling and getting at now…There are things that are here for people to use and take care of. There are places for people but there aren’t any in it.”

On the gallery’s origins:
“Donna Hollen Bolmgren was my mentor… She had a [painting] class in the Westminster Church in Upper St. Clair once a week, and I joined it with her permission, since it was an advanced class… I watched two or three sessions, and she told me to try it. It’s her fault that I have a gallery. She saw a space in Point Breeze that she thought I’d like… I looked at it and wasn’t thrilled, but I saw a ‘For Rent’ sign across the street from it… I started with the gallery in 1995 for one year in Point Breeze on Reynolds Street… Then moved here. This was the Shadyside Laundry, it was a mess. The walls just had concrete block and washers and dryers all the way down to the garage…We did the outside a few years later with Laura Jean McLaughlin. We designed it together…The front is distinctive and people have known the gallery partly because of the front. It makes them stop, so it’s been good.”

On the gallery’s international edge:
“I had a handful of local artists that I always had work of, but not that many. I came to the conclusion a long time ago, when I started, that Pittsburgh artists, it’s a small city here, they get overexposed very quickly. So I wanted things that are different that people could see here that they couldn’t see elsewhere… Not that the art wasn’t good, but it just wasn’t different, and I wanted to make a little bit of a splash. So I’ve had work from all over…places like Aruba, Liverpool, London, Venezuela…One artist from France…It’s been mind-boggling…That’s the scope.”

On the current art market:
“I’ve never taken a salary in the twenty-two years I’ve been here. The money always goes to pay the artists, pay the bills, pay my assistants, and so I couldn’t break even the last two years. The economy was just dreadful for buying art, and I might say that in a lot of ways, art galleries as we’ve known them are becoming obsolete. It may be good, it may not be. We have time to figure it out. But they’re disappearing in many places. In Philadelphia, Washington DC, and other cities around this country, especially, they have told me that the galleries are going out of business. A lot of artists locally, as well, are showing on their own, and doing their own thing, showing from their studios…occasionally doing pop-up shows in warehouse spaces…I started First Friday Art Walk when I first moved in here. There were six galleries on this street at the time. We have three now – I’m closing, so only two are active (Morgan Contemporary Glass Gallery and the Mendelson Gallery)…”

On GalleriE CHIZ’s impact on Shadyside:
“I don’t know – and it’s true. But from what people are saying, I guess a lot. People have been wonderful. I’ve had so many visitors coming in. I’ve gotten things from all over the country…to say how sorry they are [about the closing]. A person from out West sent me the loveliest e-mail… I was shocked. It’s been a long time, and people came into Pittsburgh for one thing or another, and they made a point to come in and chat and buy some art. So I think it’s impacted quite a bit from what people are telling me. It was good for me to get out every day and do this.”

Before I headed out of the space, Neuberg added casually that some of her works were going to be featured in an upcoming television show and that one of her series had even been featured in a movie.

On being featured in a Hollywood film:
“It was based on a book by Philip Roth, American Pastoral. It won a Pulitzer Prize years ago. They were working with the Film Office here, they filmed it in Pittsburgh, and they took seven of my paintings… I was recommended by another gallery here, Boxheart… David, my husband, and I read the book…We went to the Manor Theater and took pictures of that gallery scene while the movie was running on a Sunday afternoon… It was cool.”

Images from past shows….. 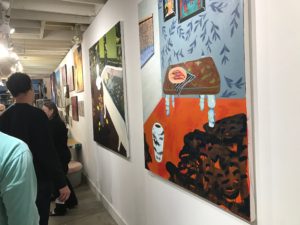 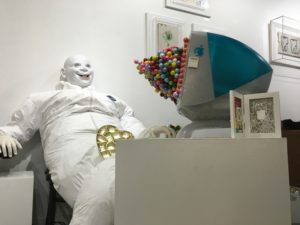 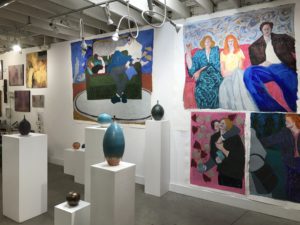 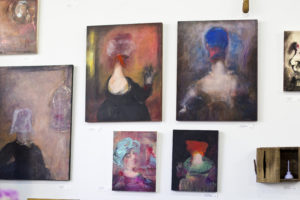 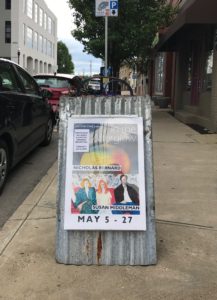 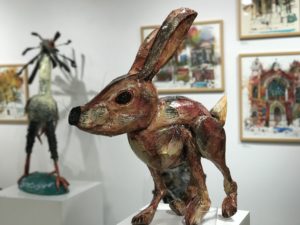 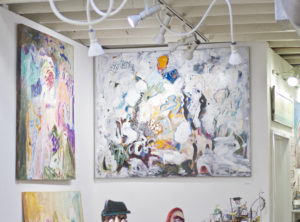 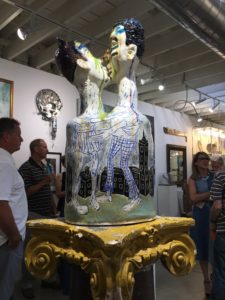 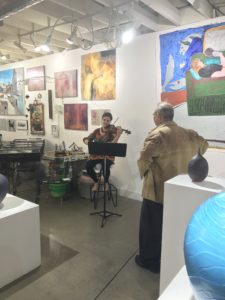 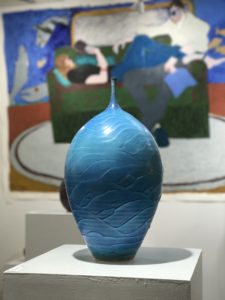 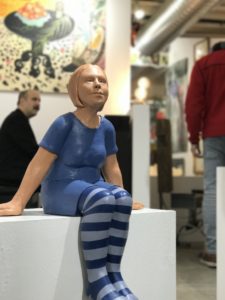