Rocky Bleier is a Pittsburgh legend for his battles on the football field, as well as the battlefield of Vietnam. Rocky joined the Pittsburgh Steelers in 1968 as the 16th round draft pick. He was also drafted in the United States Army before his career with the Steelers really began. In 1968-1969, Rocky served in the Vietnam War. In combat, Rocky was injured when his platoon ran into an ambush. Rocky suffered rifle wounds and grenade fragments in what should have been a career-ending injury. 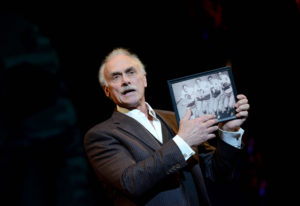 Rocky returned to the Pittsburgh Steelers in 1970 as a running back. Rocky wasn’t built like the usual running back and, combined with the injuries he suffered in the war, he had to fight harder. For the next two years, he slowly made his way to start for the Steelers and helped them win four Super Bowls (in 1975, 1976, 1979 and 1980) during the ten years he played.

Rocky’s life story was written into a one-man show by Gene Collier. Gene Collier is a sports journalist for the Pittsburgh Post-Gazette and co-author of The Chief, the Pittsburgh Public Play about Art Rooney, Sr. During last, December the show about Rocky The Play sold out. This year, it returns to Pittsburgh Public Theater, as directed by Scott C. Wise, for nine shows. Starring in the play is none other than Rocky Bleier himself, who tells audiences of his life from the football field to the battlefield and back again to the Steelers.