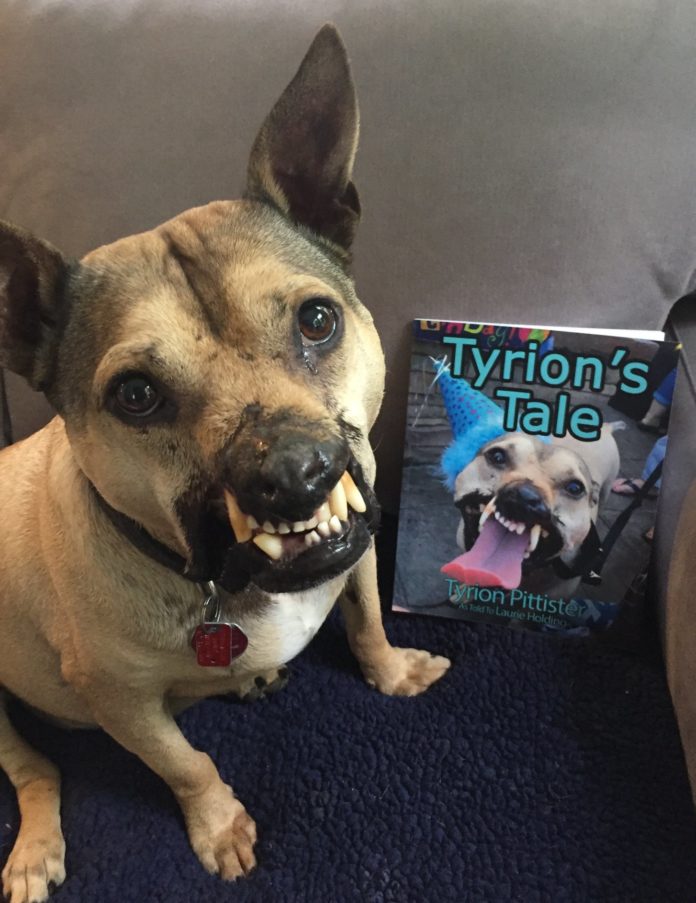 Tyrion Pittister is one polarizing pooch. When people first see him, they either cower in fear or burst into tears of joy. 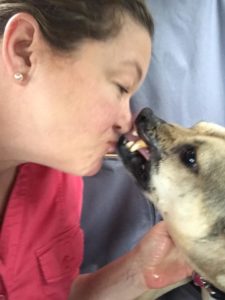 The pit bull’s face is badly damaged from his days in a dog-fighting ring, giving him a permanent snarl. Despite his appearance and horrific upbringing, Tyrion – named after Tyrion Lannister, the “Game of Thrones” character with similar battle scars – exudes happiness.

After spending a few moments with him, everyone’s a fan.

Tyrion has a large following on social media, is the subject of a children’s book, gives “pawtographs” and poses for professional photoshoots. His owners, Bernie Frey and Laurie Holding of Sewickley, keep a case of business cards attached to his leash.

In addition to his online stardom, Tyrion is a spokespup for Hello Bully, the local rescue organization that helped rehabilitate him.

Founder and President Daisy Wise immediately knew he was something special.

“The first thing I see when I look at a dog is their body language,” she says. “When dogs are happy, I know it. We didn’t put that wiggle in his butt; it was already in him.”

Wise was working for the Humane Society of the United States when Tyrion and 42 other American Pit Bull Terriers were rescued from a dogfight gambling enterprise in Georgia. After he licked his wounds in Florida for a while, Hello Bully brought him to Pittsburgh. 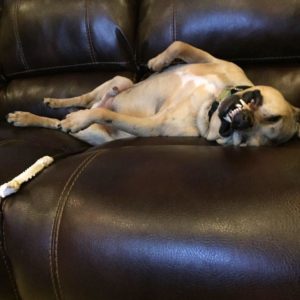 Through a grant from the Ian Somerhalder Foundation, the non-profit was able to get him much-needed surgeries. There was so much scar tissue built up in his sinus cavity from repeated bites that he could barely breathe. Part of his nose had to be removed.

It was a year before he was cleared for adoption.

In 2015, Frey and Holding were still reeling from the loss of their beloved dog, Buster Brown. They decided to volunteer as a Hello Bully foster family to help them deal their grief.

They saw a snapshot of Tyrion on Facebook and instantly fell in love.

“I knew he wasn’t leaving before he even arrived,” Frey says.

On his first night at their home, he jumped on the table and snatched a steak off of Frey’s plate. After devouring the delicious meal, he went around the room, giving everybody sloppy kisses.

Dog-fighting veterans have no manners. They’ve never been inside a house, navigated stairs or played a game of fetch. (If you throw a ball to Tyrion, it’ll just bounce off of his face.)

Because he had such a rough start in life, his new family showers him with affection, treats and chew toys. He has 11 beds throughout the abode and a canine oasis in the backyard. He gets bones directly from the butcher shop and fresh tuna from Giant Eagle’s seafood counter. When his joints ache, his mom and dad push him in a stroller or take him for a massage.

The happy-go-lucky pup is frightened by loud noises, but his newfound sense of smell motivates him to venture outside and hunt down a snack. His owners take him on daily walks through Sewickley’s business district, where he stops at every store like a furry trick-or-treater.

He’s a regular at Three Dog Bakery on Beaver Street.

“He makes himself at home here. He comes to the back kitchen area and stares at me and wags his tail,” Proprietor Maggie Kopf says. “I certainly do spoil him with treats. He has these yearning, sweet eyes and I think to myself, ‘The world was so cruel to you and you’re just the happiest little guy and want to make others happy.’” 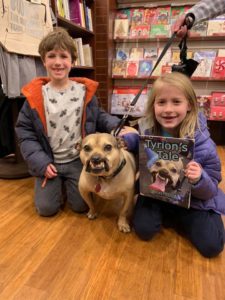 Frey, a photographer, and Holding, a writer, are working on two follow-ups to Tyrion’s first book, “Tyrion’s Tale”. The new tomes detail his adventures in Sewickley and his travels to other parts of the country, including West Virginia, where a boy mistook him for a warthog.

This summer, he’ll make fundraising appearances for Hello Bully, including his own Boozy Birthday Brunch at Threadbare Cider House and Meadery in Spring Garden on Aug. 11.

“He’s perfect for the things he participates in,” Wise says. “He’s super-resilient and inspiring. We should give these dogs every opportunity to succeed. And maybe we’ll learn some from them, too.”

You can purchase his book on Etsy: https://www.etsy.com/shop/TyrionsTales