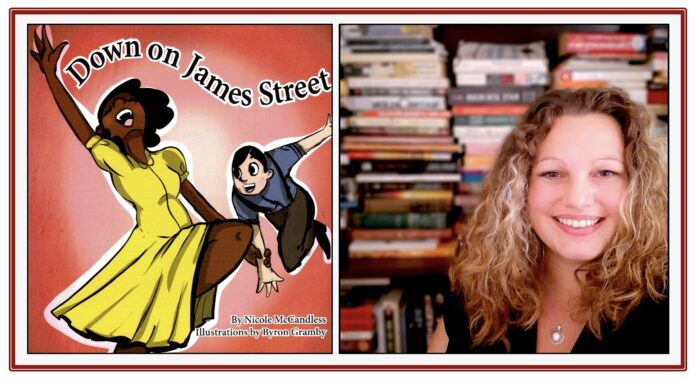 “You can’t have a revolution without dancing,” says Pittsburgh author and former labor organizer Nicole McCandless.

Her new children’s book, Down on James Street published by New York’s Hard Ball Press/Little Heroes Press and illustrated by Byron Gramby, features dance and social activism at the heart of its coming-of-age narrative geared for readers age 6-10.

The story is set in 1935 at a dance hall on Pittsburgh’s Northside where Dorothy and George are among the teens who meet to dance the Lindy Hop, Big Apple, Jitterbug and other popular swing styles of the day. When local authorities learn black and white teens are dancing together, police are dispatched to break up the dance and send the young people home with a stern warning not to return.

As a black Pittsburgher familiar with the arbitrary affronts of racial prejudice, Dorothy has no intention of giving up. In fact, she’s hatched an ingenious plan to save the dance — if she can get her peers to go along. However, for her white dance partner George, the situation presents a dilemma … he can choose to stay away from the controversy, but his friendship with Dorothy will never be the same.

Nicole McCandless is an Evans City native raised, she says, by “hard-working, fiery women who passed down a love of reading and gave me the confidence to put words on the page”. The mother of two young children, her writing draws upon a wide panoply of career experiences — grocery clerk, hostess, retail cashier, waitress and several years as a labor organizer for the hospitality industry with Unite Here.

Recently, she took a few moments to talk with LOCALpittsburgh about her new book.

Q.  What is your process when you start a writing project like this? Do you sketch out the basic plot, or do you think of the characters first?

A.  For most of my children’s stories I start with a basic idea, such as a kid learning how to skateboard, a dad cooking lunch with his daughters, etc. Then I develop characters and move onto a more solid story arc. With Down on James Street, the music and dancing part was fun and easy to write; it was the ending that took many drafts. I wasn’t able to write an ending I felt good about until I focused on George’s development as a character and what that looked like.

Q.  How did you get the idea for the book?

A.  Around ten years ago I read a Pennsylvania Labor History Journal article by University of Pittsburgh labor archives director David Rosenberg about the history of a very unique building at Foreland and James Street on the Northside. What most people know recently as the James Street Tavern jazz club was in the 1920s and ’30s home to the International Social Lyceum, an active cultural center for many of the city’s ethnic and political groups. In his article, Dr. Rosenberg mentioned he’d found a notation about the police closing up a dance sponsored because “mixed people” — black and white teens — were attending. I knew I wanted to create a story about this piece of forgotten Pittsburgh history.

Q.  Many children’s books involving historical events focus on well-known people. With Down on James Street, your primary characters are just ordinary teens.

A.  It’s true that every major social movement has famous leaders, but change is not possible without ordinary people getting involved and deciding to do hard things. Behind every famous leader through history are thousands of regular people who decided to stand up and fight. I’m interested in those people’s stories.

If people think about the Green movement today, they probably think of young activist Greta Thunberg. And while she’s amazing, I’m more interested in the average kid sitting in class who decided to get up and walk out to participate in the school strike for climate. What was going through that kid’s mind when they made that decision?  What were the events that led up to that day? How did their best friend and their mom react? How did they feel after the action?

Q.  Though the characters in Down on James Street are teens, you’ve geared the book for younger readers, age 6-10.

A.  A lot of children like to read about kids that are a little bit older than them. It can be more exciting and engaging. When I was writing this book I thought a lot about creating something that younger kids could read with a parent or teacher to help process the bigger issues the characters face as well as a story older kids could read on their own. In terms of talking to our kids about social justice issues our society is currently facing, my opinion is the younger the better.

Q.  It’s interesting that you use a historical incident from almost 90 years ago to frame the discussion about current events.

A.  Unfortunately, Pittsburgh and the surrounding region is still segregated. What neighborhood you live in will determine access to basic things like a grocery store and public transportation. In 2019 CityLab published a study citing Pittsburgh as the most unsafe American city for black women to live in. We cannot wait to start talking about our kids about these issues.

Q.  Down on James Street definitely explores those issues.

A.  I know a lot of white people who get defensive when they hear the term “white privilege”. My hope is that this book will help start a conversation that makes it easy for kids and adults to understand the concept and start changing the way they think about their city and their responsibility to engage in anti-racism work. I hope a big lesson that comes across in the book is that, when George has the turning point of recognizing his privilege, he ultimately decides the right thing to do is listen to Dorothy. It’s not enough to just recognize our biases; we have to take action by listening to black leaders in our communities. I also hope this book inspires kids to dance and listen to music. You can’t have a revolution without dancing!

Q.  Do you test out your stories on your kids?

A.  Yes! Sometimes to hilarious ends. I’ve had the experience of working hard on a story and I think, “Oh, they’re going to love this!” … and I’m met with blank stares and requests for Daniel Tiger. But then I’ve made up stories on the fly about dinosaur poop that have been a big hit.

Q.  What advice would you give to someone who wants to start writing stories for young readers?

A.  Join a local writing critique group! You can find one through the Society of Children’s Book Writer’s and Illustrators,  a community college or social media. Having a community of people to share your writing with is essential. Down on James Street would not exist without the feedback and support of my critique groups. They are a great place to set goals for yourself and work on your writing skills. Even with the pandemic happening, you can still find a virtual group to join.  # # #